Climate Crisis: Where Should I Live?

Despite the recent passage of a Senate bill, the U.S. is still making almost no response to the challenge posed by global climate change.

Separate from this, I plan to move to northeastern France for family reasons. This by itself is a decisive reason for me to move there.

These situations have allowed me to think about where I would rather live—northeastern France vs. Oklahoma—during the upcoming inevitable worldwide climate crisis, and where I would prefer that my grandchildren grow up. These are personal reasons, but some of them may be useful to the rest of you. (I never post essays on this blog that are only of personal interest to me.) 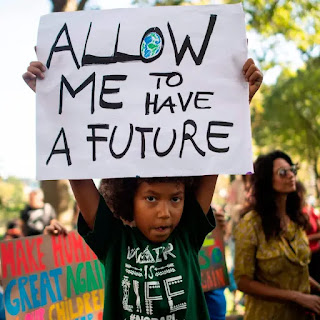 (Photo from The Guardian)

A. Direct responses to climate change

1.     I want to live somewhere away from the coast, where sea level rise is already causing problems. Oklahoma and northeastern France are both equal in being far from the nearest coastlines. Conclusion: America is about the same as France in this regard.

2.     I want to live someplace that is not prone to floods or droughts. Again, Oklahoma and eastern France are equivalent in this regard. Both have occasional severe floods in recent years, as well as droughts and wildfires. In France, the wildfires are in the south. Conclusion: America is a little less safe than France in this regard.

3.     I want to live someplace where heat waves are currently brief. Here, northeastern France has the advantage that their canicules and vagues de chaud are shorter than in the U.S. Conclusion: America is a little less safe than France in this regard.

4.     I want to live someplace that is not utterly dependent on fossil fuels. Though Europe still largely depends on fossil fuels, such as gas from Russia, there are more alternative sources of energy there than in America, on a per-capita basis. This includes nuclear energy, which is common in France. The stresses of international energy politics will have less effect on France than on America in upcoming decades. Conclusion: America is a little less safe than France in this regard.

5.     I want to live someplace with robust agriculture, since droughts and storms will inevitably reduce agricultural production and national food security. American agriculture is famous for its agricultural output, but it is almost entirely dependent on fossil fuel inputs for energy and fertilizer, and to pump groundwater. An interruption of transportation would hobble American agriculture. France has a large agricultural output (it seemed to me that Lorraine was almost one big wheat field, and maize is common in Alsace). A major contributor to stability of food production is farmers’ markets, which are much more common in France than in America. However, agricultural production in France, even the wet part, has been hit strongly by recent droughts. Conclusion: America is a little less safe than France in this regard.

B. Indirect effects of climate change. As detailed in Christian Parenti’s book Tropic of Chaos, the world already has many threats to peace and security, and many of these are related to environmental disasters such as drought. Climate change will exacerbate these problems that already exist. For example, there will be even more climate refugees crossing national borders than at present.

1.     I want to live in a society in which people are willing to give up a little personal comfort for the common good. America is not such a place. Almost a third of Americans have refused to do anything, anything at all, to reduce the spread of covid. Fortunately, the public spirit of the remaining two-thirds (vaccines, masking, social distancing) has brought about the evolution of milder viruses.

a.      Would Americans be willing to use less air conditioning, less heating, or less water in order to prevent a society-wide shortage? I do not think so. Europe is already much more frugal in their use of resources than America, and, to compensate for the reduction in Russian gas supplies, has indicated a willingness to use  a further 15 percent less. In both places, whenever you flip a switch or turn on a faucet, it is called “demand,” as if you insist to the death on your right to use as much as you want, regardless of your neighbors. But in America it really is a demand. Conclusion: America is much less safe than France in this regard.

b.     In America, we insist on the right to create as much public nuisance as possible, especially noise and litter. My house in Oklahoma is right under a flight path for vintage airplanes, which fly low overhead all day every day and sometimes half the night. In Oklahoma, we have (by my repeated count) a hundred pieces of garbage for each mile of highway. France also has bruit and déchets sauvages, but not nearly as much. At least in northeastern France, people are quiet and polite, except in Paris. Conclusion: America is worse than France in this regard.

2.     I want to live someplace with lower crime. This is because, as economic stress spreads worldwide, crime will increase everywhere, and I want to start from a lower threshold. Clearly, France is safer in this respect. I want to live someplace with fewer guns. The French have few; but in Oklahoma, gun ownership is epidemic. It is illegal for a judge to order a mentally unstable person to be denied gun ownership. Recent Congressional legislation has helped a little. Conclusion: America is much less safe than France in this regard.

3.     I want to live in a society without underlying racism. Although northeastern France has Nazi sympathizers who occasionally spray-paint swastikas in public places, the U.S. also has this problem, in addition to frequent police shootings of blacks, and mass shootings that are absent from most other parts of the world. In France, Arabs are a minority with whom the dominant culture has friction. But in America, the friction between whites and blacks, and whites and Hispanics, is greater. France has no equivalent of the utter suppression of Native Americans. Racism, all over the world, will get worse. Conclusion: America is much worse than France in this regard.

4.     I want to live someplace with good public infrastructure. I look forward to not having to own a car or drive. In America, you pretty much need a car unless you live in a rest home. This will become more important as gas becomes more expensive. American infrastructure repair is more expensive than in France because France simply does not have as many big pickup trucks (I don’t remember seeing any), although they do have commercial trucks (les camions). Conclusion: America is worse than France in this regard.

5.     I want to live someplace that has no possibility of rulership by religious fundamentalists. So-called Christian Fundamentalists get their way on almost every issue in America, especially in Oklahoma, where a single fundamentalist teacher can get a whole school system downgraded. France has Fundamentalist Muslims, but they have no chance of controlling national politics. Conclusion: America is much less safe than France in this regard.

7.     I want to live in a country that is not threatened by Russia, led by the obviously insane Vladimir Putin. All of Europe is in danger from him, while America is protected by an ocean. However, Europe is less likely to be a Russian nuclear target. One of the top targets is right here in Oklahoma. Conclusion: America is about the same as France in this regard.

8.     I want to live in a country that is not totally dominated by major corporations. In France, corporations have more influence than individual citizens, but the problem is worse in America, where at least one corporation has stated (according to This Changes Everything by Naomi Klein) that global warming and its resulting threat of international conflict would be a great opportunity to sell weapons. Conclusion: America is much less safe than France in this regard.

One of the things I will miss about America is the number of spectacular places to travel, especially the diversity of natural areas. America has everything from deserts to forests to alpine tundra. But, fortunately, I did a lot of traveling before retirement age. I been everywhere, man. Now, though I am not elderly, I am old enough to find travel stressful. France has forests in the north and dry scrublands in the south, a much diminished range of landscapes than in America. Relative to area, both countries have about the same amount of beautiful coastline. In France, I can get to lots of nice places without a car. I would be really bummed out if I knew that, in moving to France, I’d never get to see the giant sequoias of California, of which France has no equivalent. Fortunately, I have walked among them about a dozen times. I’ll have to be content with the memories.

I would be moving to northeastern France with my family anyway. But, in a traumatic future of global climate change, I have found twelve ways in which France is at least a little better than America and two ways in which the two countries are equivalent. I found no examples in which France was worse.

There are numerous things about France that many Americans would not like, but which do not bother me. I can summarize these ways: “In France, taxes are high and life is good.”

Moving to a new country, with a new language, is difficult, and it is not a reasonable solution for most of you. But think about it.