How We Know Stuff

Now here is a topic about which I could write without end. But I am going to use just one small example, about which I am nearly certain you have not heard.

A few decades ago, I bought an old, torn-up book from a cheap bookstore in Champaign, Illinois called Acres of Books. It (not to be confused with the California store by the same name) seems to have gone out of business. I bought it for five cents. It was Parley’s Universal History, published in 1886 as a children’s summary of world history from the viewpoint of triumphant white American males. It was meant as a catechism for students to recite the facts of history. It started with Adam and Eve being driven out of the Garden and ended with Abraham Lincoln and the glorious triumph of the Grand Army of the Republic over the Confederacy which, to the author, was the climax of human history. 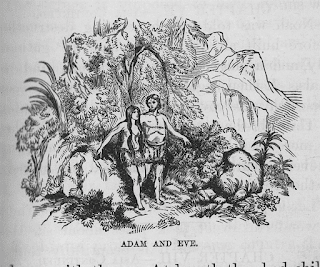 Supposedly today we value critical thinking over rote memorization, although in conservative religious schools the latter may still predominate. Here in Oklahoma, teachers are afraid to question creationism, global warming denialists, anti-vaxxers, and those who deny that the Tulsa Race Massacre happened. It makes me wonder if we have made much progress since 1886. Remember, this was almost thirty years after the Origin of Species.

But the most interesting thing about this shabby book is that one of the students, almost certainly an adolescent boy, filled the book with hundreds of pencil sketches, mostly of a woman who must have been his teacher. This was back in the days of long skirts, bustles, frilly blouses, and fancy hair. These doodles showed a fixation upon and exaggeration of the woman’s considerable bust. None of the drawings showed any bare skin except the face, and the face was often unclear. A hormonal adolescent can fixate upon anything even remotely sexual. 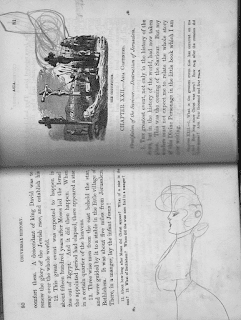 My point is that the boy was not thinking critically or carefully about what he was being taught in the book. He just soaked it up. His mind was on other things.

And this is how we come to believe many things. We soak them up uncritically while our minds are wandering over other things.