Beware of Generalizations: A Leaf Story

Here is another generalization that botanists often make. It is the subject of a Darwin video that I just posted. As in the previous example, this generalization is based on patterns and facts of nature.

The leaves of plants (whether individuals or species) that live down in the shade of the deciduous forest tend to have thin leaves. There is a perfectly good reason for this. If a plant produced thick leaves down in the shade, it would be a wasted investment, since the light is not strong enough to penetrate entirely through a thick leaf. Thus, the chlorophyll in the cells near the bottom of the leaf would not be able to make very much food through photosynthesis. Also, thick leaves tend to have thick layers of wax on its surfaces, which is a protection against drying out. But leaves down in the shade seldom experience very dry conditions. It follows, then, that plants with thick, waxy leaves are adapted to living in open, sunny conditions. Ninety-nine times out of a hundred, this generalization holds true. 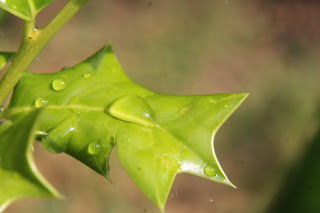 But there are exceptions. One of them is the American holly, Ilex opaca. It has thick, waxy leaves, but this species is found mostly in the shade of American deciduous forests. Its leaves are, on an area basis, much heavier than other forest floor plants; most of the plants have leaves that weigh about 2 milligrams per square centimeter, while holly leaves are about 5 milligrams per square centimeter.

It turns out there is a perfectly good reason. This species of holly is evergreen. It keeps its leaves even when the deciduous trees overhead have dropped theirs. Its leaves, therefore, get bombarded not with spring or summer sunlight but with winter sunlight. In warm forests such as those in Oklahoma, where I live, a winter day might be warm enough that the holly could benefit from making food through photosynthesis in the bright winter sun. In colder areas, the thick wax might save the leaf from excessive water loss, especially if the underground water is frozen and unavailable to the leaf.

This leads naturally to a consideration of evolutionary constraints. On the forest floor, deciduous plants are adapted to spring and summer, while evergreens are adapted to winter. A plant cannot adapted to both summer and winter, at least not very well. There is little doubt that holly leaves are not very efficient at making food in the seasons when the trees overhead shade them. But when the leaves drop, holly’s evergreen leaves can make food when the other plants cannot, in late fall, winter, and early spring. This is the evolutionary constraint: the plants with the greatest evolutionary fitness are those that adapt to one, or the other; they cannot do both. In some cases, such as the little herb Geum canadense, the plants produce relatively thick, evergreen leaves near the ground, which persist for over a year, but each year the stem grows into the air with thin leaves. The whole stalk then dies in the fall.

“Thin leaves in the shade” is one of the most widespread generalizations in nature; but the exceptions tell us a lot about ecology and evolution.