Beware of Generalizations: A Pollination Story

Botanists teach that wind-pollinated plants produce lots of pollen and do not bother with nectar or pretty petals. Nectar and pretty petals attract bees, which carry pollen efficiently between one flower and another. Wind-pollinated flowers, however, produce lots of pollen and let the wind carry it. That’s the story. That’s what everybody teaches (I did) you will find in every book (including mine). And, in general, it is true.

But keep your eyes open for exceptions to the rule. I was out for a hike, not expecting to see anything out of the ordinary. But I kept my eyes open. This is what I saw: 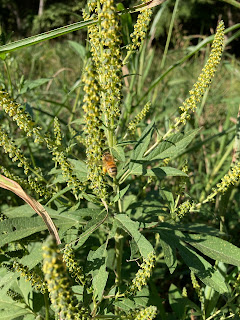 This ragweed (Ambrosia trifida) produces lots of pollen, but no nectar or colorful petals. Bees are not as stupid as we sometimes think. This honeybee found the pollen, without needing to be attracted to the flowers. She started stuffing as much pollen as possible in her pollen buckets. She probably went back to the nest to deposit bee bread, but no nectar.

I assumed that I could tell what pollinates a flower by just looking at it. If animals such as bees pollinate it, it should have colorful petals. Consider willows. Even though the male flowers have very inconspicuous petals, they have big anthers full of pollen. The female flowers also have very inconspicuous petals. I assumed willows were wind pollinated. But it turns out that the flowers have nectar, and bees can smell it. It is bees that pollinate willows.

Close and repeated observations reveal the truths of nature. Quick glances and generalizations do not.

In the next essay, I will tell a story about another generalization, involving leaves and photosynthesis, which turns out to have exceptions.