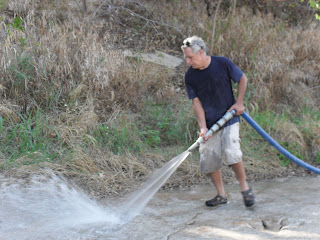 Mike O’Brien is a man driven to accomplish as much as possible as well as possible as quickly as possible. For good reason: As I explained previously, the fossil footprints are eroding away. And not just gradually; when the river floods, whole chunks of limestone are broken up into little chunks. There is a drought going on in Texas. The Paluxy River has pools of water but no flowing water. Right now is the time when most of the dinosaur trackways are exposed. Right now is the time to make casts, photograph, and map the footprints. The water has not been this low since 1988. Glen Kuban and I also wanted to accomplish as much as possible, but we cannot resist dropping our work (literally, in Glen’s case; the broom thunks to the ground as he begins talking) to explain the trackways to tourists who walk along the trails or in the riverbed.

But first it was necessary to remove the sediments that had accumulated over the tracks. On the east side of Dinosaur Valley State Park, where Denio Creek enters the Paluxy River, there is a site that needed to be cleaned off before casts, photos, and maps can be made. Mike borrowed a water pump from the park staff, with which he sucked water from a pool into a hose with a nozzle. He used the powerful jet from the nozzle to scour away sediments (see photo). Glen and I pushed brooms around to scoot the water and any remaining rocks and sediments back into the pool. We worked for about two hours, at the end of which time the dinosaur footprints began to just look like holes in rocks. How quickly fascination can turn to fatigue. But Glen and I stopped occasionally to marvel at some of the hundreds of footprints that had been hidden for years. Glen remembered them from 1988, when they were last exposed.

But Mike just kept spraying. He looked like a World War Two hero in a trance with a machine gun. He reminded me of Audie Murphy in the 1955 movie To Hell and Back. He also reminded me of a Gila monster, which is a poisonous lizard that, once he bites (according to legend) he doesn’t let go until sundown. (I mean this in a nice way.) The sun was getting low in the sky.

Unfortunately, I had to leave, but the next morning, Mike and Glen would be back in the riverbed photographing and making casts of the tracks. Their work, for which they are not being paid, is essential: they are preserving a record of some of the most important dinosaur tracks in the world.

Don't miss the YouTube videos of the Paluxy River site!

Also, tonight (October 29) is when Jupiter is in opposition to the Earth, which means it is as close as it will be this year; if you have a telescope, go take a look at it, and see the moons, which are in very different positions every night. This is what Galileo saw that made him question the world-view that almost everyone else had at that time!
Posted by Honest Ab at 12:00 PM