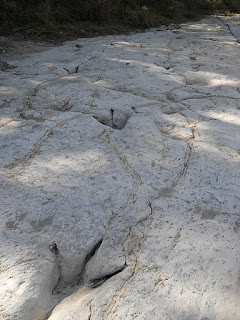 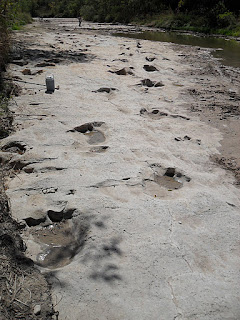 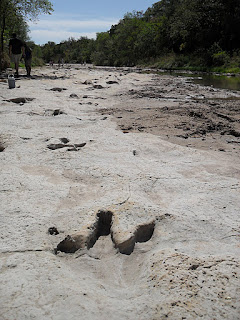 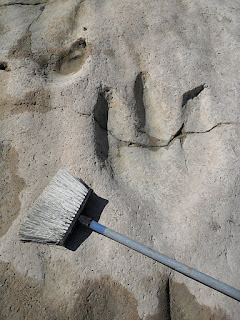 As described in the previous blog entry, I went to Dinosaur Valley State Park in Texas, where I met with Glen Kuban, who showed me hundreds of dinosaur footprints in the bed of the Paluxy River. During the ongoing drought, the riverbed was exposed, and with it footprints left by dinosaurs 100 million years ago, when the ground on which we stood had been part of the Gulf of Mexico. In the globally warmed Cretaceous world, sea levels were higher, and reached up into what is now north Texas; also, North America was not quite in the same place that it is now.

Glen helped me make a few video clips, which I am posting, about one a week, on YouTube. In two of them, Glen shows the viewers the dinosaur footprints and explains what you can learn from them. Last week I posted a Darwin video clip; this week, an interview with Glen.

The most interesting revelations about dinosaur life come from not the individual footprints but the trackways of prints. The trackways were left by at least two species of dinosaurs. One was the large, long-necked, herbivorous dinosaur species in the genus Paluxysaurus, which was a sauropod similar to the brontosaurus. What can we learn about these dinosaurs from their trackways? First, Glen pointed out, a group of them was walking in the same direction. They apparently lived in herds rather than as loners. Second, the trackways were close together, indicating that the sauropods walked with their legs underneath them, like birds, rather than out to the side, like lizards. Third, these dinosaurs, though their tails may have weighed a ton, did not drag their tails. This sounds to me like the sauropods had a pretty healthy metabolism and lots of muscle. If they had dragged their tails, they would have left grooves in the mud. See one of the above photos of sauropod trackways. These are the same trackways that I photographed back in March, when they were underwater and visible as green smudges in the photos that I took at that time.

The other species of dinosaur whose prints are common in the Paluxy River bed was a theropod in the genus Acrocanthosaurus; it was sort of a medium-sized T. rex. These dinosaurs left three-toed footprints. The above photos include some adult footprints and a baby footprint (with my foot for scale). The theropods were walking in lots of different directions, and were probably foraging. While it is possible that they were tracking the sauropods to attack and eat them, it is also possible that they were searching for shellfish to eat in the tidal flats. By knowing the size of the dinosaur and the distance between the footprints, it is possible to calculate the speed at which they were walking. Most of them were ambling along, as you might expect if they were looking for seafood left by the receding tide, but in another location the prints were far enough apart that they must have been running at almost 30 miles per hour, which is a very rapid speed for such a large animal—and this was in mud! Imagine how they could have run on solid ground!

The footprints were made 110 million years ago, and subsequently hardened into stone, along with the sediments that had covered them. There may be hundreds of thousands of dinosaur footprints in this layer of rock in northern Texas, but almost all of it is covered with hills. Only in a few places, such as the Paluxy River bed, has this rock layer been exposed by recent erosion. You can’t even find them in the nearby Brazos River, which has apparently eroded through them. Since nobody is going to spend millions of dollars to bulldoze away the hills to expose new footprints, the Paluxy prints represent a rare trove of dinosaur footprints.

And they do not last very long once they are exposed. Large areas of the Paluxy River bed, which used to have dinosaur footprints (even as recently as the 1980s, when Glen began his work), have broken up due to erosion caused by the river. It doesn’t take very long. The river undermines the trackway layer, and then the layer (of soft limestone) cracks and crumbles. Glen and I stood on an approximately 100 square meter slab of limestone with tracks in it, while right beside it was a larger area of riverbed with broken stones which had formerly had dinosaur footprints.

So if you want to see the Paluxy footprints, you’d better go now, while the drought is going on (before God heeds the entreaties of Governor Perry) and before the footprints erode away. To be continued.

Don't forget my website and religion blog (if you are interested).
Posted by Honest Ab at 9:06 AM