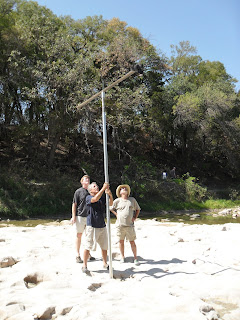 Glen Kuban is not the only person who is in a rush to study the dinosaur footprints in the bed of the Paluxy River (Dinosaur Valley State Park, Texas) before they erode away. Glen is hard at work mapping the exact locations of, and making casts of, the footprints. He has done this for a long time, and Glen’s casts and maps from earlier decades are all that remain of some of the footprints. Before making casts, it was necessary for Glen to clean the sediments away and get the water out of the footprints. When I met up with him on the morning of September 24, he was baling water out of holes with a bucket—and each hole was a footprint.

Mike O’Brien, who works for the Texas Parks and Wildlife Department, is also trying to preserve a record of the footprints. He uses a camera mounted on a large T-pole, to produce a gridwork of overhead shots. Mike had made metal grids which we put at precise locations in the riverbed. Later, Mike will electronically stitch these photos together to produce a large image with all of the footprints on it. He hopes to eventually interface his images with Google Earth.

Entirely by chance, we had been joined by Brian Miles, a petroleum geologist who is also the volunteer curator of a small paleontological museum in South Texas, the Brazosport Museum of Natural Science. Brian had heard Glen Kuban and me talking, and he wanted to join us for a few hours. We were glad to have him along. While Mike held his T-pole perfectly perpendicular, Brian would operate the remote control shutter. So on this day there were three of us helping Mike with his overhead photographs (see photograph above). We helped him move the metal grids around also.

Glen, Brian, and I spent a lot of time explaining the footprints to the scores of visitors who were walking in the river bed. Nearly without exception, they were fascinated by the footprints and by what could be learned by studying them. Parents helped their fascinated kids walk right alongside the dinosaur trackways. Some of the teens and tweeners asked some really good questions. And they made some pretty insightful guesses. Some of the guesses were way off, but some were pretty good. And all of these guesses could have been formed into scientific hypotheses. Dare I hope that some of the kids we talked to that day might go on to become scientists, science educators, or at least science hobbyists?

The sun was hot (around 100 degrees) and we got sunburned and thirsty, but we had a good day of work. Glen helped me make videos; Mike got a lot of photos; Glen, Mike, and I explained a lot of things to the visitors. Oh, and by the way, all four of us were doing this for free. To be continued.

Don’t forget to check out my videos about the dinosaur footprints on YouTube. There will be a new one today, starring Glen.
Posted by Honest Ab at 8:22 AM