Religion vs. Science, the Vast Gulf Part Twelve: The Future


In this final essay of the series, I will consider the difference between a religious view and a scientific view of the future. It is a superb way to start the new year, is it not? In one sense, there is a similarity between science and religion in this respect. Both religion and science accept that the future is more or less determined: in one case by God, in the other by the laws of nature. And there is a little bit of uncertainty about the future. In religious traditions, a prophecy of destruction can actually fail if people hear the prophecy and repent. This is the plot of the really witty story of Jonah. (Most people just know the whale part, but I recommend reading the whole story.) In science, there are historical contingencies that can alter the outcome of a course of events.

The big difference is in the way that we can “know” what the future will bring. Scientists can study current rates and processes, and project them into the future. We can predict how much global warming will occur, or how much rainforest loss. But with each such projection there is uncertainty. With regard to global warming, climatologists typically make a set of projections: one projection for “business as usual,” that is, if we do nothing to reduce carbon emissions; another with moderate carbon emission control; and another if we get really serious about controlling carbon emissions. And there are always uncertainties caused by unmeasured variables. For example, Brazilian rainforest loss may be correlated with the Brazilian economy.

But fundamentalist Christians claim that there is no uncertainty about the future. They believe that every detail of the future is foreordained. They read the book of Revelation and tell you exactly what is going to happen. With this assumption comes a great deal of arrogance. They believe so strongly in their Bible-based predictions that they ignore the evidence right in front of them. For example, Revelation does not mention global warming, therefore it is not happening—even when the data are right there to be seen.

Scientists reject any pronouncements about the future that are based on assertions of authority. Indeed, even if there were scientists two thousand years ago as good as those today, two-thousand-year-old predictions would be found to be wrong today, because the range of uncertainty gets greater and greater with the passage of time. We can predict 2025 quite accurately, but not 2125.

Many religious people believe that their scriptures describe human nature but do not make specific predictions of events. This generalized religious view is not the one that I am here criticizing.

A major problem with “Revelation thinking” about the future is that fundamentalists interpret the visions and then assume their interpretations cannot be wrong. They calculate timelines from it, and declare when the world will end; and then it does not; but, with no apparent sense of shame, they predict it all over again. Harold Camping had to be wrong three times at predicting the end of the world, most recently in 2011, before he admitted he wasn’t very good at it. One student at our university, in the freshman class of 2004, believed strongly that the battle of Armageddon had in fact begun when the U.S. invaded Iraq. Many people in Durant, Oklahoma, where I work, are confident that Barack Obama is the antichrist and they adjust their Revelation timeline to the dates of his presidency. They claim it is because he is a Muslim (which is not true) and Revelation describes Islam as the ultimate attack on Christianity (which it does not). 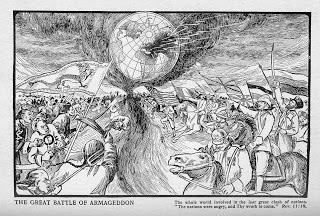 In 1917, a book published by the Seventh Day Adventists confidently predicted that the Great War (now called World War I) would be the end of the world and the beginning of Christ’s rule. They even drew a picture of what the Battle of Armageddon might look like (see above). They confidently predicted that the Imperial Russians would be on the same side as the Americans, against the Chinese. The year had not even finished before the Russian Revolution changed the geopolitical landscape.

Therefore the conservative religious approach to predicting the future follows this series of steps, all of which science rejects: 1. Assume that Revelation accurately predicts the future. 2. Make wild guesses about what the visions of John the Revelator actually mean. (Visions? They are more like hallucinations. John must have gotten some bad hash from Damascus when he had those visions.) 3. Derive a timeline from combining these two processes. Despite these wildly off-base assumptions, religious fundamentalists are confident enough in their predictions that they are willing to bet the future of the world on it. For example, why try to save the planet if God is just going to kick the hell out of it next year? (Well, what if God isn’t going to kick the hell out of it until the year 2500? They cannot imagine that God could wait that long.)

This way that religion and science differ is the most dangerous of all.
Posted by Honest Ab at 6:54 PM