The Passing of a Great Scientist (Carl Woese)


Carl Woese died on December 30, 2012. He was the scientist who discovered the archaea, or “archies” (pronounced “arkies”) as we called them when I knew Woese at the University of Illinois. Archies look like bacteria under the microscope, but they usually live in extreme environments, such as deep ocean vents. But, in terms of biochemistry and DNA, archies are as different from bacteria as they are from us; in fact, archies are a little more closely related to humans than they are to bacteria.

Biochemical characteristics marked the archies as unusual: they have a different kind of phospholipid than either eukaryotes or bacteria have, and their DNA is associated with histones, just like that of eukaryotes. But DNA sequence analysis was required to truly demonstrate the uniqueness of archies. Woese was one of the first scientists to do DNA sequencing and apply it to evolution. This was back before PCR and all the other kinds of automation that genomic analysis now has access to. It took Woese the better part of a year to determine a DNA sequence that now can be done overnight. Woese’s work established that archies had a separate line of evolution from that of all other organisms. Based on his work, scientists and scientific amateurs know that life consists of three domains, rather than five kingdoms. We can no longer lump bacteria and archies together into the Kingdom Monera.

An important consequence of Woese’s work was the way it fitted together with the insights of Lynn Margulis, who died in 2011. Margulis showed that important cell components (mitochondria in most eukaryotes, and chloroplasts in many protists and most plants) were the evolutionary descendants of bacteria that invaded, then formed a mutualistic partnership with, eukaryotic cells. Since Margulis first demonstrated this, many scientists have concluded that the nucleus itself was a mutualistic invader: an archie that moved into a eukaryotic cell. This would explain the (slight) genetic similarity between archies and eukaryotic nuclei, as well as their shared histones. Woese and Margulis disagreed on many things but most biologists have accepted the insights that both of them revealed and which have revolutionized our view of the history of life.

I took a seminar from Woese about 1982. He was very interested in some of the basic ideas and assumptions of science. As a young grad student (and also going through a period of withdrawal from various forms of creationism), I did not understand much of what we discussed, based as it was on the writings of David Bohm. But Woese was convinced that there was an ecstatic aspect of science, a deep meaning which he associated with a Buddhist view of the universe. (I do not know if he was a practicing Buddhist.) Woese’s view of science opened his mind to creative thinking; he wrote a paper once in which he suggested that life began in the clouds rather than in the ocean. And he questioned assumptions; for example, he said, perhaps there was a first “life state” rather than a first cell.

Many scientific colleagues considered Woese to be unconventional and strange when he first began his work on the archies. But he had at least two decades to see his ideas incorporated into the fundamental understanding of the evolutionary history of life. There is a pedestal outside of the life sciences complex at the University of Illinois commemorating the Archaea that Woese discovered there (see the photo). 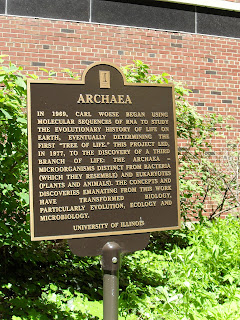