On Sunday morning, June 2, the Road Trip participants met for discussions. I did not prepare much, because I knew everyone—and I mean everyone—would have something good of their own to contribute. I did note that, in the preceding three days of the Evolution Trip, we had not really talked about evolution. But I found that the participants either already knew about or had little trouble grasping the ideas of natural selection (even as applied to languages and computer programs) and sexual selection.

One of the main things that came out of these discussions was that each of us had resources we could share with others. Here are some that were discussed or that were forwarded to me later:

·         I have a YouTube channel in which I portray Darwin making very short and simple points about evolution. If you need something in your class that takes only three or four minutes, consider using my channel.
·         My current popular book about evolution is Life of Earth: Portrait of a Beautiful,Middle-Aged, Stressed-Out World, published by Prometheus Books.
·         A book that is several years old but has interesting information on the weird things that genetics can confer upon humans is Mutants by Armand LeRoi.
·         TheBattle for God by Karen Armstrong was recommended.
·         Stephen Jay Gould’s Rocks of Ages describes the concept of NOMA (non-overlapping magisteria) as a useful approach for dealing with science and religion, although some evolutionary scientists such as Jerry Coyne and Richard Dawkins object strongly to it.
·         Fran Stallings recommended this online course about human evolution.
·         Gordon Stallings recommended Straight Dope, a website that answers all kinds of questions including sometimes scientific ones.
·         Carl Rutledge has posted his photos of the Evolution Road trip on his Facebook page: search for Carl Rutledge at Ada, Oklahoma.
·         Fran Stallings recommended Awake, an Australian website, provides psychology-based resources to support sustainability. This month’s featured topic is, why do people lose interest in important environmental issues?
·         I think all participants received a PowerPoint presentation from Mary Kay Johnston about evolution. She also recommended this YouTube video in which AronRa explains the evolution of cats as an example of how macroevolution wouldn’t look very macro if you were there to see it at the instant that it began, e.g. when dog and cat lineages first separated. AronRa’s YouTube channel has many excellent videos about evolution, very well edited, unlike my YouTube channel in which I just turn on the camera and start talking.

To finish up, I want to tell about the wonderful participants in this trip. We felt like a close-knit group as we watched turbulent weather all around us, Thursday night with large storms passing all around us, and Friday night as we followed the news about tornadoes hitting the Oklahoma City area for the second time in less than two weeks.

May 30: To celebrate the birthdays of Lindsay Fluker and myself, I brought little muffins and two birthday candles. Since it was my 56th birthday, I chose a bran muffin. May 31: Mary Kay opened a bottle of wine, but it was no ordinary wine. It was 420-million-year-old Chardonnay from Trilobite Farms. We all wanted to know where she found it but she ain’t telling; that’s where her retirement money is going to come from. 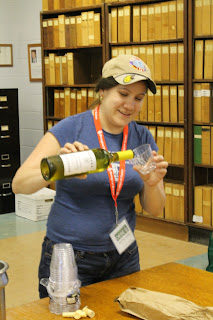 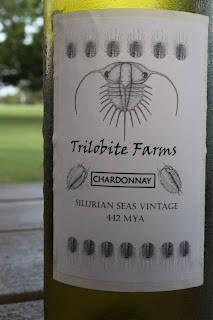 Here are the participants, in alphabetical order:

I hope our paths cross in the future. For all blog readers, watch this blog for announcements of future Evolution Road Trips.
Posted by Honest Ab at 4:29 PM