Oklahoma-Texas Evolution Road Trip, Part Two. The World of the Past, continued.


Note: I corrected the spelling of Texigryphaea in the previous entry.

On May 31, the participants in the Oklahoma Evolution Road Trip rode in the van up US 177 north of Dickson. Just south of Lake of the Arbuckles is the road that leads to Goddard Youth Camp, about which more later. Right at that intersection is a large new roadcut right through Ordovician marine deposits. You can find this on the geological map of the Arbuckles. You will probably want to enlarge the PDF to 100% and navigate around. The deposit is labeled in salmon as Osv (Ordovician Sylvan Viola Group) at about 34 degrees 23’ latitude and 96 degrees 58’ longitude. We probably also wandered into the OSDh (labeled in purple) which is the Hunton group, of Ordovician-Silurian-Devonian age. Despite the treacherous footing on loose stones, the participants scoured all over the place for fossils, finding mollusks, rings from crinoid stalks (a kind of echinoderm), and brachiopods, which resemble sideways mollusks. Back when these deposits formed, brachiopods were as abundant as mollusks. But brachiopods were either inferior or unlucky during the Permian extinction 250 million years ago, and since that time they have been rare. I found something that might be a fossil or might be a crystal. Interpreting what you see in a fossil deposit is not always as easy as it looks in the books and documentaries. The photos show Mary Kay Johnston and Gordon Stallings, and a brachiopod fossil found by Sharon Young. 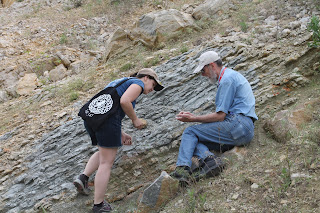 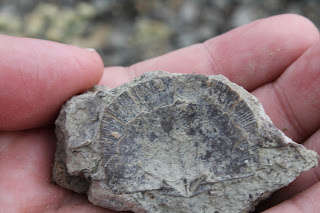 Lots of pickup trucks and rigs drove rapidly and loudly up and down the highway. Were there really a dozen red pickups, or was it the same one a dozen times? About the time we heard but did not see a major automobile collision, we decided it was time to go.

We ate lunch at the museum at Goddard Youth Camp, where Clayton Edgar, son of the camp founder, met us. Many school, scout, and church groups stay at this camp. I asked Clayton whether the church groups expect him to tell them about creationism. He said he would if they insisted on it, but their mission was to teach about the deciduous forest, the prairie, and dinosaurs.

Clayton introduced us to Fran the Acrocanthosaur, or at least a cast of her bones. Cephas Hall found the 90 percent complete skeleton near Hochatown in eastern Oklahoma in terrestrial Cretaceous deposits. The story of this skeleton, which was stolen and reclaimed, is told in this book. Clayton showed us where Fran’s major injuries had healed. 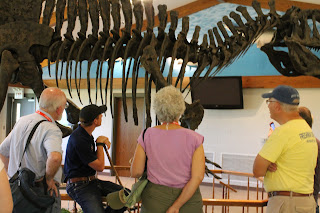 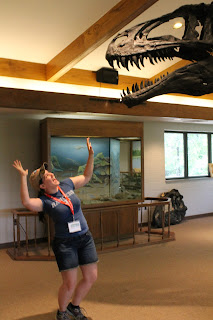 This was not to be the last time that Mary Kay was to have an encounter with an acrocanthosaur.

When we got to the top of the Arbuckle Mountains, we could see the Cambrian period Colbert rhyolite (Cc in red, at about 34 degrees 30’ latitude and 97 degrees 15’ longitude on the geological map; note that “Cambrian” is a C with a line through it). The Cambrian period began about 540 million years ago. We stopped at the overlook to see Turner’s Falls, perhaps the most beautiful view in Oklahoma, and Collings Castle, built by a retired OU Professor in the mid twentieth century. (All of us professors are rich enough to build castles.) 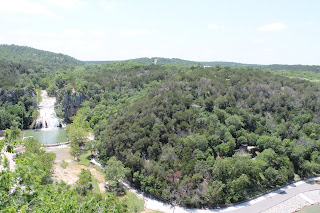 Thousands of people stop there, and very few know that the rocks along the little path are actually Cambrian stromatolites of the Cool Creek Formation (Ccm in tan). Stromatolites are formed by single-celled algae and layers of minerals. They are very rare in the fossil record after the Cambrian period, because animals with jaws (which evolved at that time) could easily graze on them. The reappearance of stromatolites after the Permian extinction was part of the evidence that animal food chains had been disrupted worldwide. Stromatolites are found today only in shallow seas that are too salty for animals to live. They look like brains on the heads of the Star Trek Talosians. Gordon Eggleton and I had previously scouted some out, but it was Gordon Stallings who tracked down some much better specimens. 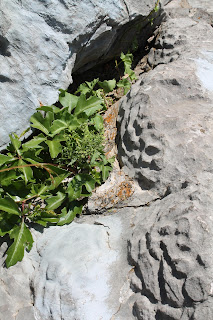 I can't resist telling you that the living plant beside the stromatolite fossil is Cissus incisa in the grape family Vitaceae.

Also, nearby, we saw the Silurian age Sylvan shale. Shale forms from mud, and is usually a rock, but this shale erodes back into mud very easily.

Next we stopped at a scenic overlook where, about 280 million years ago, a very dramatic thing happened. Today Oklahoma is in the middle of the North American Plate, but during the Pennsylvanian period three plates were moving violently in this area. This movement eventually produced warped wrinkles of anticlines and synclines. This is called the Southern Oklahoma Aulacogen. An aulacogen is an arm of a three-way junction in which a continental plate is breaking up in three directions. During the Pennsylvanian period, forces beneath the plate pushed up the Arbuckle Mountains, raising up the Cambrian and Ordovician layers that had already hardened into rock. Aulacogens can cause whole mountains to collapse to form valleys known as grabens, which subsequently filled in. This was one such place: 280 million years ago cliffs of Ordovician rock (Owk, Ordovician West Spring/Kindblade, cream colored on the map) towered over a deep valley. Violent erosion washed large chunks of rock into the valley, and minerals glued them together into some of the most amazing conglomerate rock (IPcr, Pennsylvanian Collings Ranch conglomerate in blue on the map). Look on the map at about 34 degrees 25’ latitude and 97 degrees 11’ longitude, follow the faint line that indicates Interstate 35. These violent crustal movements also broke up the Ordovician limestone into big chunks. 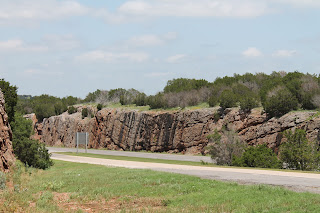 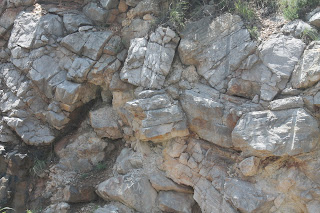 We then drove east into land in which pre-Cambrian granite had been pushed to the top. It is the pCgg, Precambrian granitic gneiss at about 34 degrees 22’ latitude and 96 degrees 37’ longitude, which is light orange with red x’s on the map. Granite, an igneous rock, has no fossils, and erodes more slowly than limestone. The Blue River flows through this granite, which is perhaps why the water is clearer than that of the Washita which drains primarily limestone.

It was finally time for us to see something alive, not dead. I introduced the group to one of the rarest trees in the world, the seaside alder, Alnus maritima. 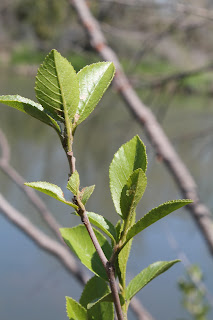 The Oklahoma seaside alder is (along with the Georgia and Delmarva seaside alders) one of three remnant populations of a species that had once been widespread. Alder seeds germinate in sunny, wet gravel, of which there was a lot at the end of the last ice age but which is rare today. Today, if the ground is wet it is shady. My research has shown that the alders produce thousands of healthy seeds but no seedlings survive past their first year. You can download a PDF of the article here.

We also compared three different evolutionary adaptations to two different kinds of habitats. Oak trees grow slowly and produce strong wood in stable forests, where they can “expect” to live for centuries. But alders and cottonwoods live in unstable riparian habitats, where floods frequently wash the trunks away. Cottonwoods grow quickly and produce cheap wood, since they can “expect” to live only about a century; a large flood kills them. Alders produce numerous weak trunks, which get killed every few years by floods (or, in this case, a large fire that burned the forest in 2011). The underground clump, however, can survive for perhaps centuries. They start growing back immediately after fires and floods.