Oklahoma-Texas Evolution Road Trip, Part One. The World of the Past


Ten participants and two instructors met for what might be the First Annual Oklahoma Evolution Road Trip at the University of Oklahoma Biological Station on the shores of beautiful Lake Texoma May 30-June 2, 2013.

As in almost all scientific meetings, the best part of the Oklahoma Evolution Road Trip 2013 was the participants getting to know one another and exchange ideas. I will write more about this later, but I wanted to begin with it. What a fine group of people, each with different insights to contribute! Get a group of people like this together, and good things are bound to happen! I hope I speak for everyone when I say that interacting with the participants was the most memorable thing about this trip. I want to thank all of the participants, who made every moment of work I put into planning and execution of this trip very, very worthwhile. Although I have led many long field trips (as an adjunct faculty member at the Wheaton College Science Station in the Black Hills during summers from 1993 to 2005), this was the first trip in which I had to organize everything. I believe I thought of and prepared for everything, but had I not, the strong network of camaraderie in the group would have made up for it. The meeting of minds in this trip is every professor’s, every teacher’s, and every trip leader’s dream. And, starting with this entry, it will be clear to every reader how important a part Dr. Gordon Eggleton, retired professor from my home institution (Southeastern Oklahoma State University), played in opening our eyes to the world of the past.

After we all met for the first of many good meals at noon on May 30, we had a brief introduction to geology, including how we know the age of the Earth and of fossil deposits. Gordon Eggleton showed us how layers of rock can be deformed into arch-shaped anticlines in which, when they are eroded, the oldest layers can end up at the top of a mountain and younger ones at the bottom. (Older layers above younger layers is one of the creationist arguments against an old Earth.) And this is exactly what happened in the Arbuckle Mountains, with Cambrian period rhyolite (the Colbert formation) at the very top, with Cretaceous period layers at the bottom. The Cambrian period began about 540 million years ago, long before the Cretaceous, which began about 120 million years ago.

We saw three Cretaceous layers of limestone in southern Oklahoma on Thursday May 30. The real bonanza was the Kiamichi limestone, which is full of fossils. It is between the younger Caddo limestone and the older Goodland limestone. We visited Ft. Washita, which was built in the early nineteenth century. The slabs from which Ft. Washita was built came from Kiamichi limestone, and there appeared to be more mollusk shells than matrix in them. It is possible that the Kiamichi limestone formed in shallow seas in which a vibrant food base of microscopic algae supported abundant mollusk populations. And almost all the mollusks were probably the same species, Texigryphaea navia. This book about the geology of Bryan County (named after William Jennings Bryan) (see Figure 10 on page 16) shows the layers of Bryan County rocks, with our three layers of limestone near the bottom of the series. The geological description of the Kiamichi limestone indicates that Texigryphaea is a major component of the rock itself. In the second photo, Carl Rutledge takes a close look at the fossil-crammed slabs. 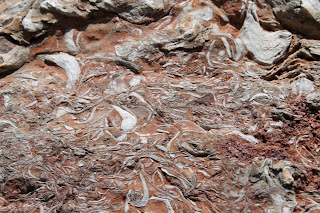 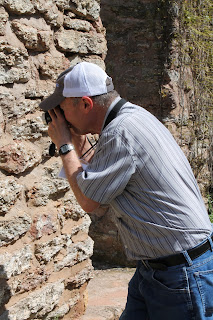 Geological deposits are not jumbled as one might expect from a gigantic flood of Noah. Each contains only fossil species characteristic of the geological period, and even then not all of them. Terrestrial Cretaceous deposits, such as those in eastern Oklahoma, often contain dinosaur bones, but in south central Oklahoma the Cretaceous deposits are all from shallow seas.

Ft. Washita is also interesting for historical reasons. The fort was built in the nineteenth century to defend the Chickasaws and Choctaws, whom the U.S. government had forced from their ancestral homelands in the Southeast, into eastern Oklahoma, then called Indian Territory. The Chickasaws and Choctaws did not want to leave their homeland, which is why this forced migration is called the “Trail of Tears.” Nor did the Caddos and Comanches, who were already in Indian Territory, like the forced influx of other tribes. Another “Trail of Tears” was the forced migration of Cherokees to northeastern Indian Territory, a journey that my great-great-grandfather made. Ft. Gibson was built to protect the Cherokees. The Cherokee tribe sued the United States government for the right to remain in their homeland. The case went to the Supreme Court, under Chief Justice John Marshall, and the Cherokees won! But President Andrew Jackson said, “Let John Marshall enforce it.” Jackson defied the Supreme Court. Ft. Washita also served as a staging area for the Mexican-American War and the Gold Rush. The Union abandoned it to the Confederates before the Civil War. Many Confederate soldiers in Indian Territory were Native Americans. The last Confederate general to surrender was Stand Watie, a Cherokee, who held out as long as he could near Ft. Towson in far southeastern Oklahoma.

During the nineteenth century, the Ft. Washita region was mostly prairie, with scattered bois-d’arc (Maclura pomifera) and post oak (Quercus stellata) trees. We saw some gnarled old bois-d’arc trees that, for aught we knew to the contrary, dated back to those times. Twentieth century fire suppression has allowed trees such as elms that had previously been confined to river bottoms to spread over the hillsides. Many of the bois-d’arcs appeared to be several trees growing together. The bois-d’arc fruit has many seeds, and several trees could grow from a fruit lying on the ground. Back before the extinction of the large herbivorous mammals at the end of the most recent Ice Age, the seeds could be dispersed and scattered about from the intestines of the mammals. This is an excellent example of a “ghost of evolution,” in which an adaptation (in this case, bois-d’arc fruits) makes no sense because the co-evolutionary partner (the large mammal) is now extinct. You can read more in the book by Connie Barlow. Teachers may find Connie Barlow’s YouTube vid about the ghosts of evolution very thought-provoking and useful for students.

The Caddo limestone also contains fossils. Many fossils have eroded from this layer into a little stream that we visited on a slick muddy back road (Watkins Road south of State Route 199, which connects with Kinlock Road). Members of the Road Trip group scoured the stream bed and found dozens of interesting fossils, including mollusks and echinoderms. The mollusks included bivalves and casts of ammonites. The people in the photo are Sharon Young, Fran Stallings, Jim Huff, and Gordon Eggleton. 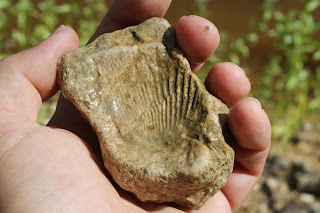 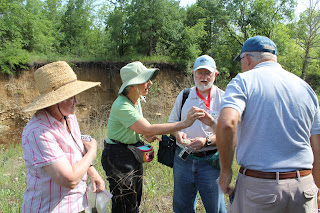 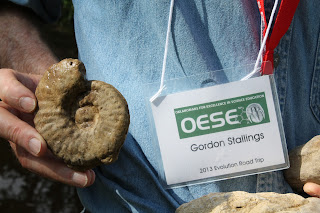 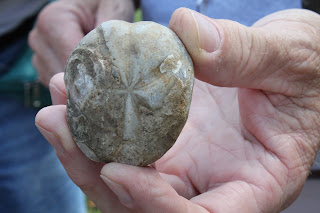 After supper back at the Station, we met to review the history of the Earth. Rather than to go over it here, I will direct your attention to the University of California Museum of Paleontology website, which summarizes what happened on Earth during each geological period. I would also refer you to my revised Encyclopedia of Evolution, but it is available only by subscription from Infobase Publishing, or will be someday maybe when they get around to it. My original encyclopedia is out of print, but you can probably find used copies. We also discussed how to teach this information to students so that they can appreciate it. The way not to do it is to give a lecture, the way I did. Instead, we can get the students to encounter Deep Time by having them walk along a sidewalk that represents the history of the Earth, in which multicellular life emerges only in the last few meters and in which a human life is as thin as a coat of paint. A useful link for teachers is here. We can also get students to think about the different lines of evidence that led to the conclusion that a giant asteroid hit the Earth 65 million years ago, causing the Cretaceous extinction. A good resource for this is the video The Day the Mesozoic Died by Sean Carroll, produced by Howard Hughes Medical Institute. The Permian extinction had an even greater impact on the Earth, even though it was probably caused by volcanoes rather than an asteroid. Less is known about it because it occurred 250 million years ago. A very readable account of the Permian extinction is the book by Michael Benton. An appreciation of Deep Time and the use of scientific thinking to figure out what happened in the past—there are endless possibilities here for teachers!

We listened to NOAA warnings about storms passing all around us, but by nightfall the storms had mostly calmed down. The next day we visited more fascinating geological sites, as described in the next blog entry.