Science is Alive and Well in Oklahoma, part one.

I posted the following on the Oklahoma Academy of Sciences blog a few weeks ago, but the rest of you might want to know about this too.

The Oklahoma Academy of Science held its 2014 Technical Meeting at Northeastern Oklahoma State University (Broken Arrow campus) on November 7, preceded by the Executive Council meeting on November 6. As president, I enjoyed watching and occasionally coordinating the good and enthusiastic work of so many students and faculty from around the state. Nobody had to be there. It was sheer enthusiasm for science that made the meeting a success.

I wanted to mention one paper that really got my attention. Lois Ablin, a chemist at Oral Roberts University, talked about advances in “green chemistry,” particularly in student organic chemistry laboratories. I took organic chemistry in 1976 and it has been downhill from there. Back then, we poured toxic chemicals all over the place (including benzene on our hands), and all of them ended up down the drain and probably out in the ocean (I was at UC Santa Barbara). Today, thankfully, we have many rules that preserve personal and environmental safety. One of the easiest ways to reduce the amount of waste produced by student labs is simply to use small-scale reactions. In my day we used whole flasks and beakers of toxic chemicals. But in green chemistry, the same reactions can be performed in small vials, heated in a microwave oven instead of over a burner or in a hot glove. It saves time, too: you can microwave a reaction for eight minutes with the same result that you would get with an hour-and-a-half reflux. Some universities have even gone so far as to carry out reactions on filter paper, rendering fume hoods unnecessary.

There were lots of student posters. This is an time for faculty to see the excellent work done by students at other universities. I barely had time to glance at them and take grainy photos. I got to stop and look at a poster from a student at Cameron University who had studied the stomach contents of a mammoth that had lived in what is now southern Oklahoma during the last ice age (in case you didn’t know there were mammoths here). The mammoth had eaten horsetails. 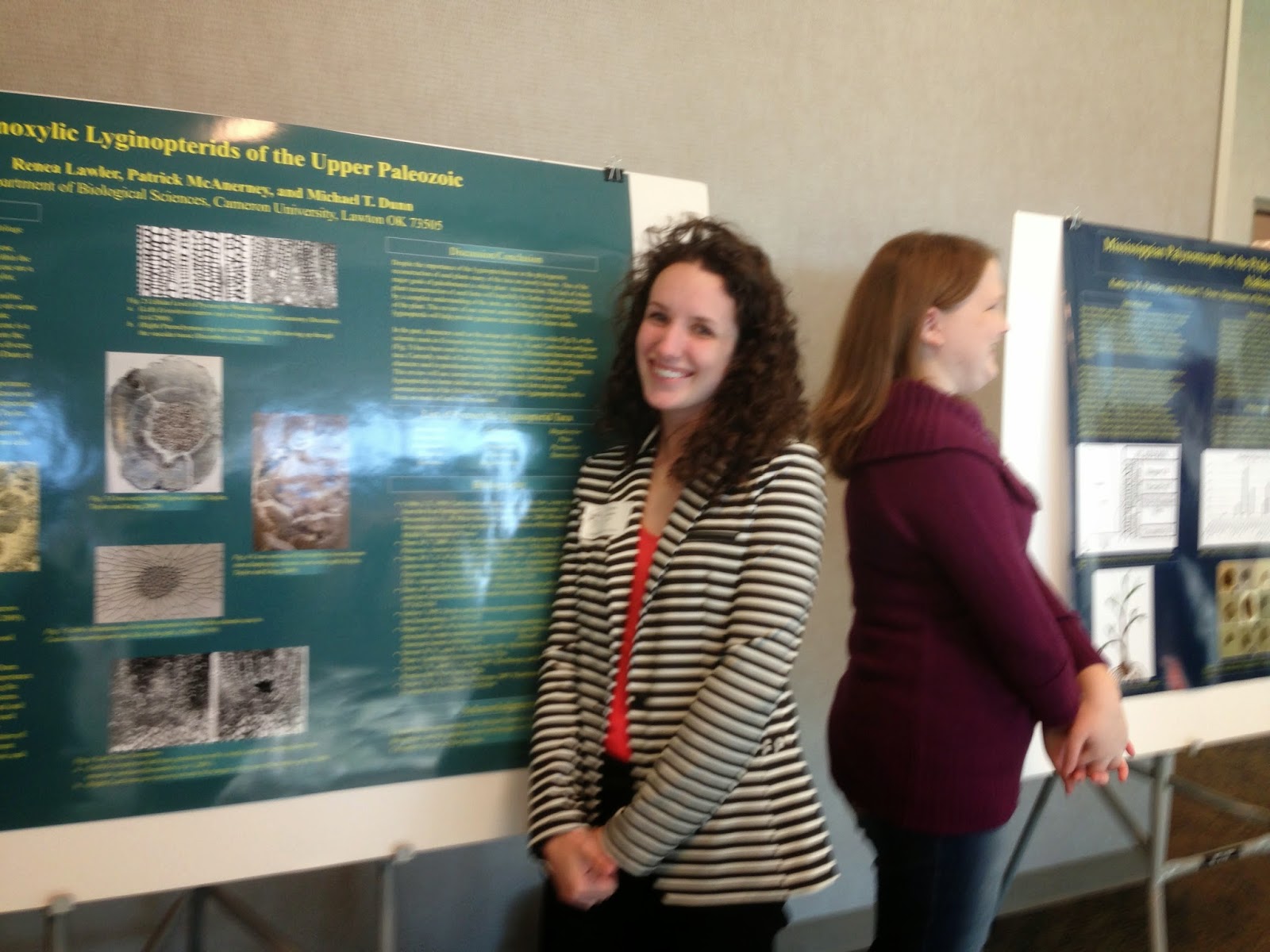 Bruce Carnes, from the University of Oklahoma Health Sciences Center, gave the luncheon presentation about the evolution of aging. What an interesting topic, especially for people who might have wondered what evolution has to do with medicine. For those who might have thought that aging is simply a problem that can be solved by some magic medical bullet, Bruce (who described himself as a disappointed optimist) had some bad news. Natural selection has indeed produced a human species that is guaranteed, in the absence of intrinsic and extrinsic accidents, to live for about 55 years, which is enough time not only for nearly all reproduction to be completed but for a person in tribal society to discharge their grand-parental duties as well. Fifty-five years, then, is our “warranty period.” After age 55, the body starts to break down in multiple ways. There’s no way to stop it, even though we try very hard to prolong our lives as much as possible. It makes more sense, Bruce indicated, to try to have a healthy old age rather than simply a long one. Once the “expiration date” has passed, a car or a person might keep running for a long time, but will require more and more intervention. Old age is not a problem to be solved but a process to be managed.

In the next entry, I will write about the symposium about science-related issues in the afternoon. It was one of the most exciting things the Oklahoma Academy of Sciences has ever done, I think.
Posted by Honest Ab at 10:12 AM