Science is Alive and Well in Oklahoma, part two.

This is probably the last post for 2014. Normally I would think about how to summarize the past year, but it is not different enough from any other year for me to do so. I suppose, then, it is good to end the year with the second essay about the Oklahoma Academy of Science meeting. Science is alive and well and actively responding to the challenges of the modern world. I focus here on a symposium that was an overview of the present and future scientific challenges in Oklahoma, which are not that different from the ones faced by other states. I posted a version of this essay on the Oklahoma Academy of Science blog.

Among the afternoon activities at the 2014 Technical Meeting of the Oklahoma Academy of Science was a well-attended symposium about science-based issues in Oklahoma. About forty people were in the audience to learn the latest about evolution education, climate change, conservation of natural areas, fracking and earthquakes, and water issues.

It wasn’t just scientists or students in the audience or on the panel. We included speakers from citizens’ groups as well. You didn’t have to be at the symposium very long before you realized how important it is to understand science in order to make the right decisions about these issues, which are among the most important that Oklahoma (and every place else) now face and will continue to face in the future. This is an important fact that, I think, most politicians and perhaps also most members of the press overlook. Fracking, for example, is not something that oil companies have the sole competence to judge. Citizens need access to scientific information. Perhaps even more, they have to know that they need scientific information.

Vic Hutchison, a retired zoology professor from the University of Oklahoma, is the grand old man of evolution education in Oklahoma. He started Oklahomans for Excellence in Science Education (OESE), which may be the most active state-level anti-creationist group in the country. He summarized recent creationism-inspired bills that have come before the Oklahoma legislature and have, thus far, failed, mainly due to the persistent efforts of OESE members. Because OESE focuses on the importance of science, rather than attacking religion, we have been able to convince not just the Democrats but some of the Republican majority as well. A couple of years ago, Vic received an award from the Academy for his many years of work. Such an award is not an annual event but given only for special reasons. OESE leaders will have a hard time even collectively continuing the work that Vic has started.

Monica Deming, a researcher at the Oklahoma Climatological Survey, summarized the scientific evidence of current and future climate change and how it will affect Oklahoma. Oklahoma is facing higher temperatures and droughts in upcoming decades that will have a major effect on the economy. As an employee of a state scientific agency, she did not address any political issues. She didn’t have to. The facts speak for themselves.

Amberlee Darold, one of Oklahoma’s two state seismologists (scientists who study earthquakes), explained that Oklahoma has begun to rival California as the earthquake capital of the United States. While from 1882 to 2008, Oklahoma experienced an average of 0.1 earthquakes per year of magnitude 4.0 or greater, there were three per year in 2009 to 2013, and 2014 by itself has had twenty-four such earthquakes—and the year isn’t even over yet. This corresponds precisely with the recent acceleration of new oil extraction techniques. The earthquakes correlate closely with wastewater injection for oil extraction, but not actually with hydraulic fracturing (fracking) itself. A member of the audience, representing the Sierra Club, pointed out that these were not mere numbers, but reflected significant damage to the homes of people who cannot afford to rebuild their damaged homes. Amberlee just presented the science, but it was obvious to all of us that the explosion of earthquakes in Oklahoma represents a cost shared by nearly everyone in the earthquake-damaged regions of Oklahoma that pays for the profit enjoyed by corporations, mainly by its wealthy directors and investors.

Amy Ford is president of Citizens for the Protection of the Arbuckle Simpson Aquifer (CPASA). The Arbuckle-Simpson is a very important aquifer in south-central Oklahoma. Amy told us about the long struggle to prevent this water, upon which several large and many small communities depend for their survival—many thousands of people—from being sold and piped away for the profit of just a handful of land owners. The passionate efforts of this citizens’ group, and its legal work that is funded by private donations, has resulted in laws and policies that now protect this aquifer. CPASA shows that citizens need not be the helpless victims of corporations. (And it helps to have rich donors helping out as well.) Amy emphasized the importance of science in this effort. CPASA had the scientific evidence on its side. When corporate interests challenged them, CPASA invited them to present their scientific evidence—of which they had none. As unlikely as it may have seemed, science won the day against political and economic shouting matches—even if just barely.

The panel participants are important people and I am glad they accepted our invitation to speak. It wasn’t always easy. For example, the governor of Oklahoma appointed Amy Ford to a panel that is evaluating Oklahoma reading and math education standards (and eventually, I assume, science education standards as well). Because at some point she may be confronted by creationists, she had to avoid any appearance of favoritism with OESE, and had to politely leave the room while Vic was talking. In order to have all of these fine people on the same panel, we found a way to work things out.

The presentations generated some lively discussion. Although I had to step in at least once and direct the energies of some audience members in a constructive direction, I believe that the occasional strong feelings were a good thing: it means that these issues matter! Even some inconvenient comments were, in my opinion, welcome (to a point).

Here is a photo (sorry, it is not of the greatest quality) of the panel members. L to R: Amberlee Darrold; Jona Tucker; Amy Ford; Monica Deming; Vic Hutchison. 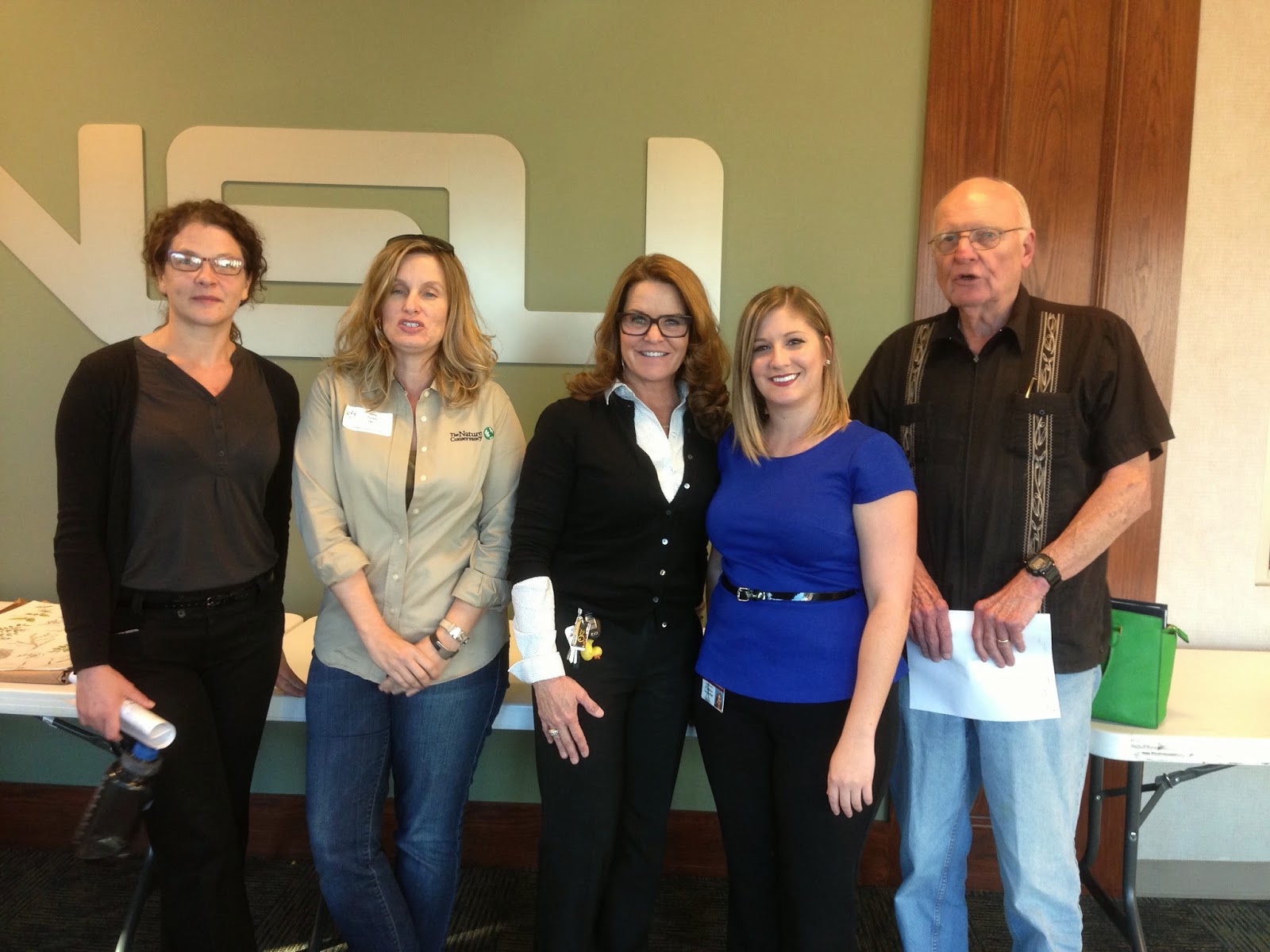 I think symposia of this nature are going to become a new tradition in OAS. Terry Conley, president-elect of OAS, is already planning a symposium about endangered species, which is an important issue in Oklahoma, where many citizens do not realize that it is an important issue.

I end the year with this thought: in upcoming years, scientists and science activists will continue in their passionate work to make the world a better place for everyone.
Posted by Honest Ab at 9:41 AM