On the Thursday of the Second Oklahoma Evolution Road Trip (see previous entries), we went down into the mystical, mythical, misty land of Texas, through fog that shrouded the Red River. We kept driving down to Dinosaur Valley State Park. After a picnic lunch, we looked for dinosaur footprints. This location is described more fully in earlier blog entries (here, and follow the links). We could only see a couple of prints, because the river was up, filling the footprints with sand and gravel. We did find one—one of the best—that was above water level and with which the students had their photos taken. 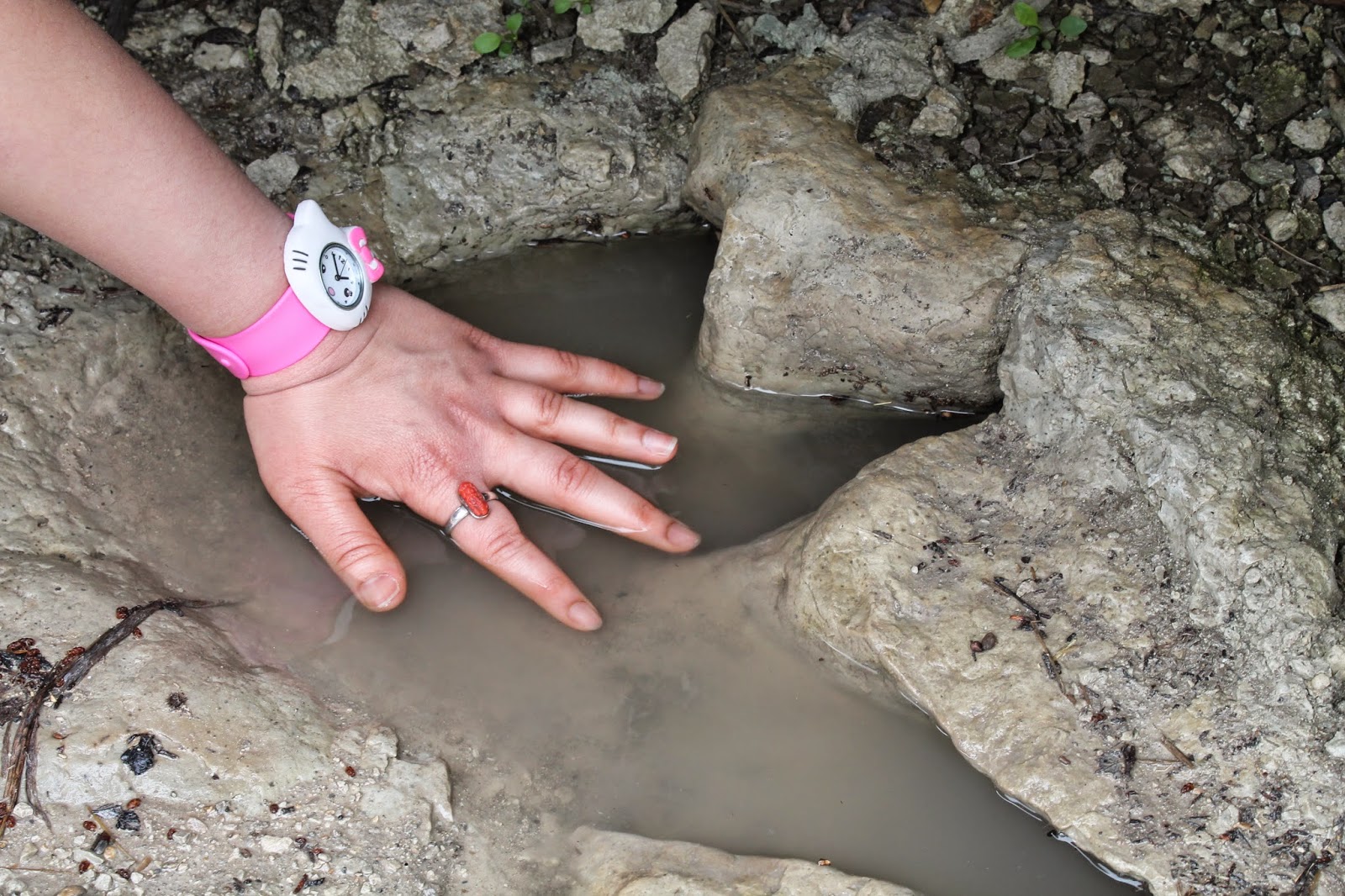 I did not need to tell the students very much; this brilliant group pretty much figured out all the things you could learn about dinosaurs by studying not just their footprints but their trackways. We wished that we could have been there when the water was low and Glen Kuban was with us. As a consolation prize, the next day I showed them some videos from my YouTube channel in which Glen explains the trackways (for example here and here).

Technical note: since the earlier entries, the Paluxysaurus dinosaur has been assigned to the genus Sauroposeidon.

I also told the students about the “man-track” controversy, in which a relatively small number of creationists claim that there are human footprints alongside and even overlapping the dinosaur footprints. This would show that humans and dinosaurs lived at the same time and that, ergo, all of evolutionary science was wrong. Of course, the creationists cannot explain how, in the middle of Noah’s Flood, dinosaurs came out of their hidey holes and left footprints in sediments that had just been deposited by that flood. But we will let that pass. If, in fact, there are verifiable human prints overlapping with dinosaur prints, then evolution has a problem.

So we all went (and paid our admission fees) to Carl Baugh’s Creation Evidences Museum, which I have described in earlier blog entries (for example here). The first thing that I noticed was that the displays (with fake slave shackles) that claimed that evolution led to slavery had been removed. But several of the students went straight to the display that claimed to show a human footprint overlapping an Acrocanthosaurus print. They all noticed that the so-called “man-print” looked fake. All the toes were perfect, and there did not appear to be an arch. One particularly observant student pointed out to me that the silica grains inside the man-print reflected light, while the silica grains outside the print did not, which is exactly what you would expect if the print was carved into the rock. Gotcha! Another alleged man-print did not appear to have any relief, but looked like a layer of paint. Finally, one of the students noticed that the alleged man-print and the (undoubtedly real) dinosaur print had the same amount of relief. But this should not have been possible; the dinosaur would have compressed the mud, and the human footprint on top of it would have been shallower. I’m not absolutely sure about this, but it does look a little suspicious, doesn’t it?

Some of the alleged man-prints were very large and supposedly produced by giants (Homo bauanthropus, which Baugh named after himself). The students also saw the hammer supposedly deposited in Cretaceous limestone. (It might have slipped in a limestone crack maybe a few decades ago and was then cemented by dissolved calcite.) Some of the students were quite skeptical that giants would use such a small hammer. Maybe it was for dental work, one of them said. These students noticed things that, in my previous visits, I had not. I remain grateful for their insights.

We watched (some of us more, some less) a video of Carl Baugh explaining the history of the planet to us. It is an astonishingly different version than what scientists accept, and even most creationists. He explained the red shift of the galaxies, which makes some of them appear to be 13 billion light years away, by saying that God stretched out the heavens really really really fast on one of the days of Creation. Consider that 13 times 365 is 4,745. God would have stretched out the heavens at 4.7 trillion times the speed of light to do this. He would have had to suspend the physical laws of the whole universe to do this, except on Earth, which was unruffled by all this cosmic excitement. A miracle? I suppose the creationists can make up as many miracles as they like. He said the vapor canopy created a pink light. He also said, I think, that ultraviolet light, cycling through the vapor canopy, created the magnetic field. He also said that God increased the diameter of the Earth after the Flood. He also said that Psalm 18 describes a great noise that shot out into the heavens, “which we assume was microwaves.” A biblical literalist claiming that noise is microwaves? Our heads were spinning with the things Baugh just made up. Perhaps the most amazing was his claim that everything in the fossil record is larger than their modern (post-Flood) counterparts. There are numerous counter-examples (one thinks of horses, for example), but, I suppose, Baugh could explain these away by saying that the organisms that are larger today are not, in fact, counterparts of the smaller organisms in the fossil record.

Outside the museum there is what looks like a petrified log, but one which petrified quickly in a mineral hot spring. 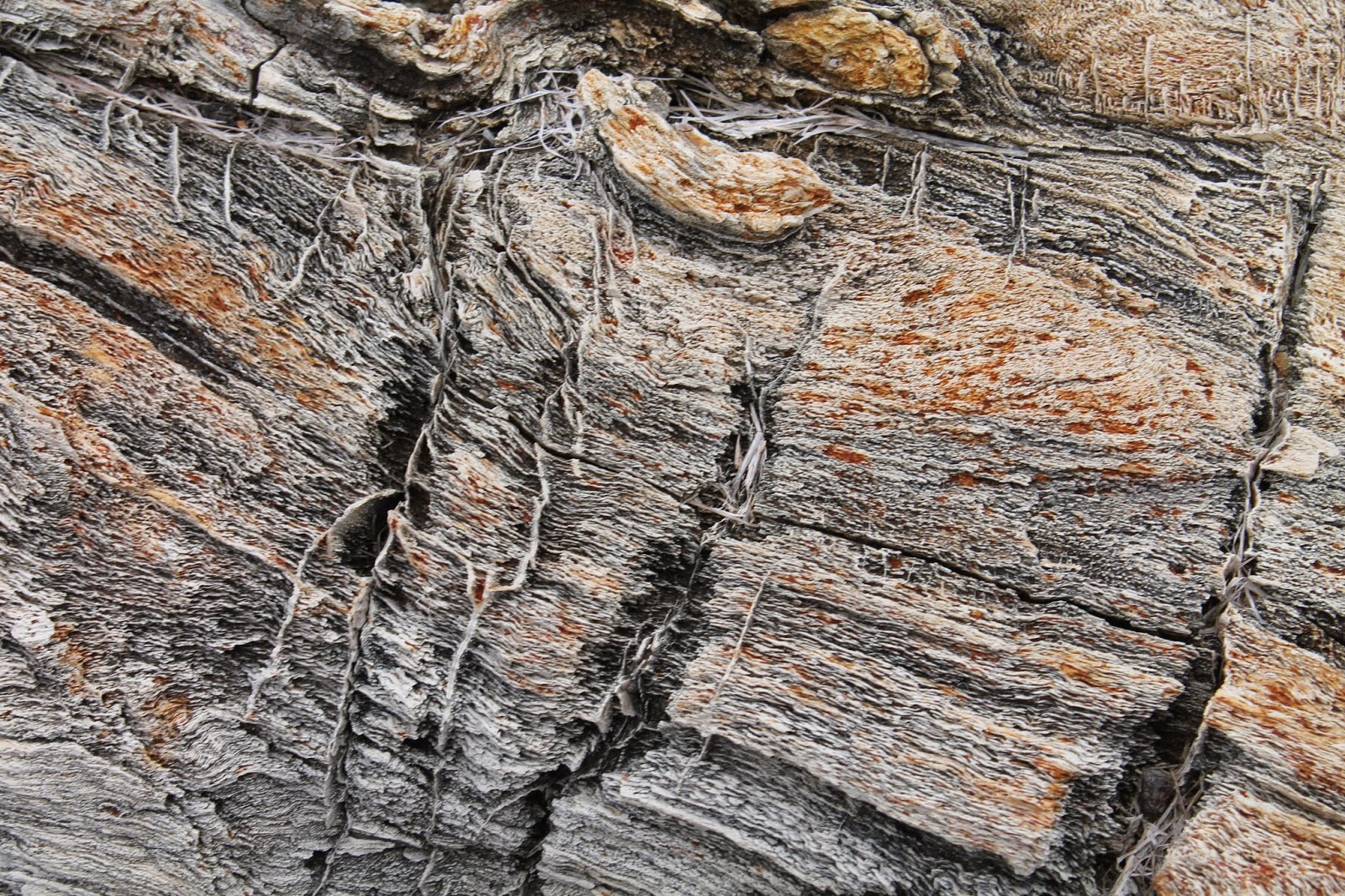 The very existence of petrified wood seems to indicate an old Earth; but can petrified wood actually be young? Look at the photo and you will see that it is mineralized, not petrified; the wood is still there, forming easily visible fibers. Real petrified wood (such as this piece from outside of the Goddard Youth Camp museum) is not like this. 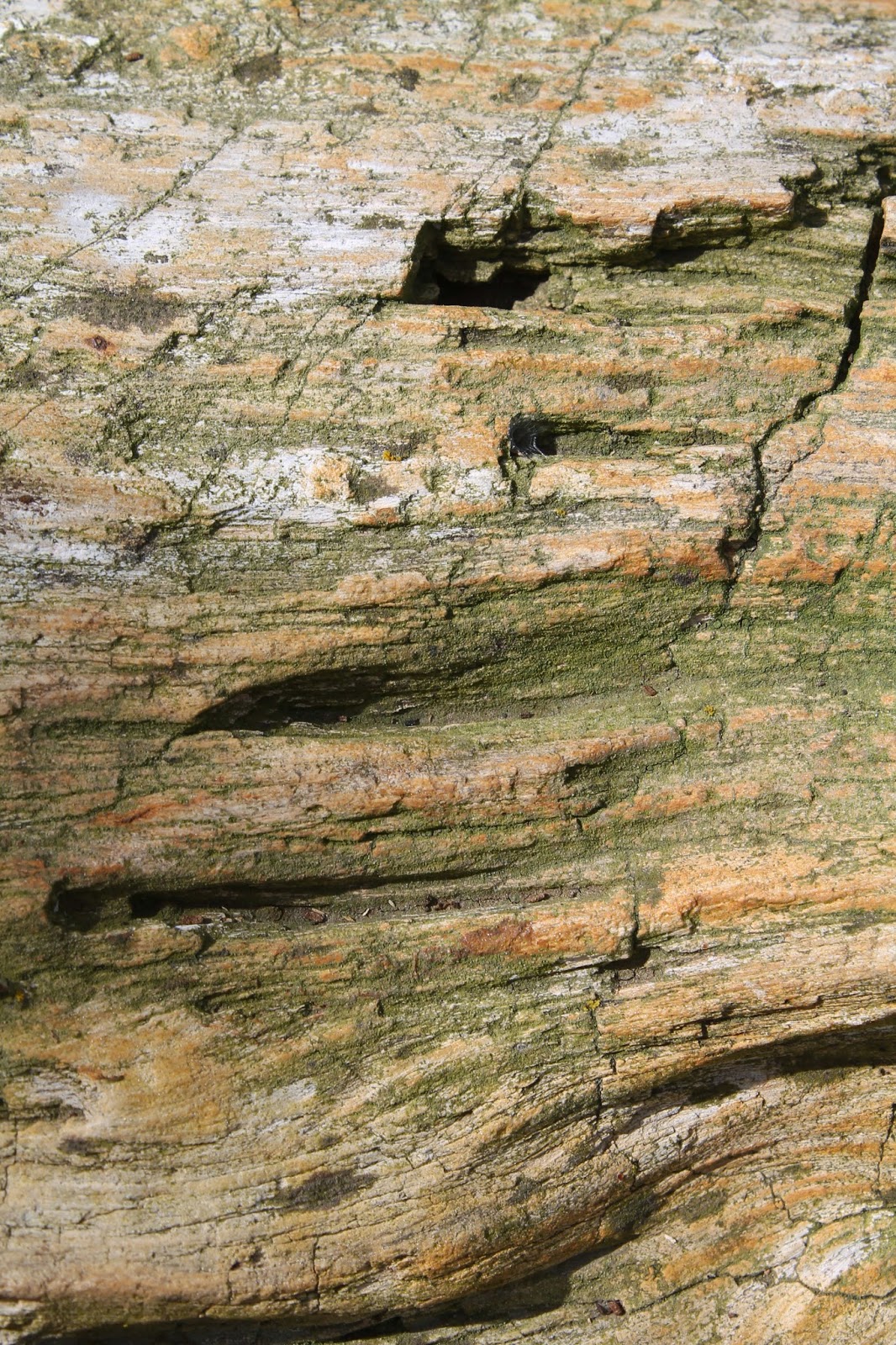 The hyperbaric chamber, which I saw on earlier visits, and which looks like a TV set submarine, is still sitting idle. I asked about this. The receptionist said that all they needed was $250,000 more dollars and they could get it up and running. To prove what? They want to prove that the high air pressure that a vapor canopy would have caused makes organisms grow bigger and healthier. They cannot get permission to experiment on humans or animals, so they presumably still plan (as I was told in 2013) to use plants. But couldn’t they build a smaller chamber for plants, one that would not require so much money? The same observant student who had noticed the silica grains also saw what looked like a small pressure chamber back in a corner. One of the members of our group speculated that the hyperbaric chamber was just a ploy to keep raising money.

Afterward, we went back to the picnic area to discuss what we had seen. We tried to figure out the genetics of Noah and his family. How could five people (Noah, Mrs. Noah, and the wives of the three sons; the sons would have had only the alleles from their parents) have contained all of human genetic diversity? Well, maybe they could have, if they were black. Studies consistently show that almost all human genetic diversity is contained within Africa, with other races having subsets of that diversity. One problem is that, if all humans are descended from Noah’s family, shouldn’t human DNA show a distribution pattern centered around Mt. Ararat, which is in modern Turkey, where the Ark supposedly landed? That is, instead of an afrocentric distribution, shouldn’t there be (I am the first person to use these terms, and I claim priority) an araratocentric or turkocentric distribution of human genetic diversity? The Adam and Eve in the Baugh museum mural were pure white. We also discussed whether the Flood water would have been fresh or salt water or maybe brackish. Whatever the case may be, many species of fishes would not have survived, and the Bible makes no mention of fishes aboard the Ark. Finally, the students noted that it was strange that footprints of a race of giants would be found in Baugh’s museum, but no other evidence for these giants is found anywhere else in the world: in particular, no giant human bones.

However interesting dinosaurs are, humans with their ability to invent stories are much more interesting. Having reached this conclusion, we relocated to a famous barbecue restaurant in Glen Rose.
Posted by Honest Ab at 8:38 AM