I’ve seen plenty of penumbral eclipses, when the full moon passes through the edge of the Earth’s shadow and turns orange. But last night there was a deep and full eclipse, in which, to use Biblical language, the moon turned to blood. 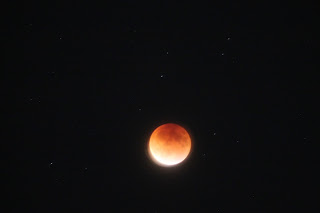 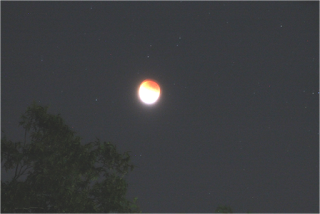 What did people think in the days before modern astronomy when they saw such an eclipse? They obviously gave it a supernatural, and apocalyptic, explanation. But even after scholars began to understand that the sun, moon, planets, and stars were objects in the heavens rather than gods, they still had a hard time explaining astronomical phenomena.

Back when church authorities enforced the idea that the Earth was the center of the universe, and that everything else revolved around the Earth, they had a hard time explaining the movements of the planets. Some of the planets would appear to reverse direction. Copernicus explained that the heliocentric model, with the Sun in the center of the solar system, could easily account for these movements. But geocentrists, who succeeded in arresting Galileo, burning Bruno, and would have done something to Copernicus had he not conveniently died when his book was published, invented “epicycles” in which the planets did little ballet pirouettes while they circled the Earth.

But even after the Copernican model was accepted, and everyone knew the Earth went around the Sun, many scholars still enforced a theistic model on the universe. First, they insisted that the orbits were perfectly circular, because both God and circles are perfect. We in the post-Newton era know that planetary orbits are elliptical, not circular.

Moreover, some scholars thought that a perfect solar system would proclaim God’s glory by having planets and moons that all lined up, all of them revolving in a perfect ecliptic. But if this were the case, the moon would have a blood-red eclipse every month, not just every thirty years or so; and there would be a transit of Venus (see here for my 2012 essay about it) not just every couple of hundred years but every year.

Instead, the solar system formed out of a revolving disc of dust and gas, in which the planets and moons formed imperfect planes of revolution, not the perfect ones that God would have created.

The very afternoon before the eclipse, I listened to a radio interview of two astronomers at the Vatican Observatory. They made it clear that, to them, faith was not a rock of certainty upon which they could build their beliefs, but a source of wonder and anticipation. To them, faith was expecting to discover something beautiful and surprising. The Vatican, these days, has come a long ways from the days of Galileo and Bruno.
Posted by Honest Ab at 11:16 AM