Why Genesis is Wrong, Even Figuratively, Part One: Human Nature

Most readers of this blog know that the creationist insistence on a literal reading of Genesis is completely wrong. One reason for this is that they are picky about which parts they take literally and which parts they consider figurative. They say the Genesis days are 24 hours but they do not believe the “firmament” is actually firm, as implied in the original Hebrew of Genesis 1, or that rain falls through the “windows of heaven” as stated in Genesis 6. Same old, same old, I won’t bore you with this.

What I consider more interesting is that Genesis is wrong even as a figurative picture of the universe, life on earth, and humankind.

One example of this involves human nature, human evolution, and the origin of society. Christian evolutionists (they do exist) have struggled to figure out which stage of human evolution was represented by Adam and Eve. They believe God made Adam from the “dust of the ground,” but that this phrase refers to matter, which includes DNA and cells. Perhaps, they speculate, that there was a point in history in which the spirit of God infused itself into an existing animal species, Homo sapiens. For centuries, even conservative Bible believers have speculated about the existence of “Pre-Adamite” humans.

However, there appears to be no abrupt point in human evolution in which an animal species became suddenly spiritual. Christians in science who try to reconcile Genesis and evolution have had a devil of a time.

And, I believe, they need not bother. The picture of human origins in Genesis is all wrong. It depicts a primordially sinless human race, which experienced “The Fall,” after which humans had a sinful nature. There has never been a time when humans or any of our evolutionary ancestors have not been fighting and killing one another. As far back as you look, you find what we would call sin. Recently, it was reported that one of the Homo heidelbergensis bodies in Sima de los Huesos in Spain was a murder victim at least 350,000 years ago.

And, furthermore, the Christian story depicts humans as falling not only from primitive sinlessness but into modern depravity, or “original sin.” That is, that modern human nature is evil, unless the person has the Spirit of God living in him or her. But this cannot be true. Human nature is not entirely evil. Human nature is characterized by (imperfect) goodness and altruism within groups—cooperation, even love. It is also characterized by genocidal evil between groups. Human nature has both.

So, for example, good Jewish soldiers under Joshua could carry out genocide against Canaanites with not a second thought, because the Canaanites were outside their group. Good Christian Massachusetts pilgrims could slaughter Pequot villagers with scarcely a second thought because the Pequots were not in their group. (I say scarcely, because in his own record of the events, William Bradford was actually bothered by the screams of the Native Americans as they burned or were shot; however, in God’s name, he suppressed those inconvenient humanitarian thoughts.) In the Confederacy, until recently revered by the state of South Carolina and still worshiped by hundreds of thousands of Christian racists, Christian men and women could torture slaves because they classified slaves as “other,” in particular as property rather than persons. As Jon Stewart and associates said, it is difficult to kill a person, but easy to kill a heretic.

One reason we know the Bible is wrong about human nature is that those religious humans who supposedly have the Spirit of God living in them are no better than any other humans, on the average. Conservative Christians are no more or less likely than anyone else to commit fornication, adultery, financial crimes, etc. The constant stream of Christian televangelist scandals is no different than revelations of scandals in any other group of people, except that televangelists proclaim themselves to be morally superior. Reverend Ted Haggard’s homosexual partner was not bothered by the relationship itself, but by Haggard’s hypocrisy—that’s why he spoke out. If there is an indwelling Spirit, it has no overall effect on Christians compared to non-Christians. I know good Christians and good non-Christians and so do you.

There actually is some good news in human history. Humans have gradually (on the whole, not in every individual instance) expanded their compass to include more and more humans in their group. Who could forget the Wedgwood medallion of the early 19th century, depicting a slave in chains, with the words, “Am I not a man and a brother?” Including slaves in our human family is the only reason they ever got freed. 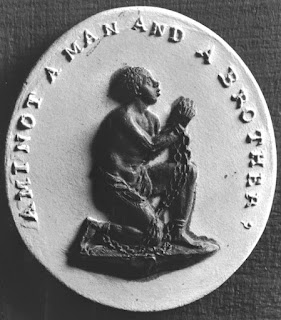 Therefore, the real picture of human history has been a gradual widening of humanitarianism rather than a sudden Fall from sinlessness into depravity. Furthermore, much and perhaps most of this expansion has occurred in the last few hundred years, long after the completion of the New Covenant and the founding of the Christian Church. In Christian doctrine, New Testament principles as expounded by Jesus were the ultimate expression of goodness, and there has been no improvement since that time.

Consider, for example, Christopher Columbus, about whom I will write as we get closer to October 12. When Columbus tortured and enslaved Native Americans, he was either evil or not. If we believe that the Bible condemns such actions, then Columbus was evil, and we cannot do such things today because they are evil. But if we believe that Columbus was a hero who brought the light of Christianity to the heathens, then he was not evil, and we should be able to do such things today.  No Christian should say “It was OK for Columbus to do those things but it would be wrong for me to do them,” because that implies that during the two thousand years since the New Covenant began God somehow changed the rules.

An evolutionary view, in contrast, would say that since the time of Columbus we have widened our compass of humanitarianism. We can say the standards of good and evil are different now than in Columbus’ day. We cannot condone Columbus (he should have known that rape and murder were wrong) but we can perhaps understand him better. Unlike us, he was raised to think that anyone who was not a member of his holy Catholic Church should die.

In conclusion: Genesis is wrong about human nature and its origin. Genesis implies, even figuratively, that primitive humans were sinless, and modern humans are depraved unless God saves them. An evolutionary view indicates that human nature has always been both good and evil and that morality has evolved.
Posted by Honest Ab at 11:50 AM