Humans are a very altruistic species. That is, altruism is a large part of our instinct. It is such a prevalent component of our instinct that it is one of the major resources for parasites.

The number of criminals who fraudulently prey upon well-meaning (altruistic) people is incalculable. No need to go into this. I just thought I would mention a particularly disgusting example that took me by surprise. As each week passes, I discover more kinds of evil in the world that I had previously been unable to even imagine. This was one of them.

Most people really want to make the world a better place. Some people would gladly destroy the world for short-term gain, but most people would not. Most people don’t care enough about the world to do anything to help other people. But that leaves millions of people who really want to help. One way that many people help the world is in supporting farmers’ markets. When people buy vegetables at a farmer’s market, they are getting high-quality and healthy food directly from family farms, bypassing industrialized and corporate agriculture. I love them. Whenever I go to a farmer’s market, I feel just a little hope that the future will resemble this rather than the nightmare fate that probably awaits the world. Peace, love, okra, and tomatoes. The produce is usually a little more expensive than in a big store, but it is worth it. In this photo, my daughter and her boyfriend examine some produce at a Tulsa farmers' market. 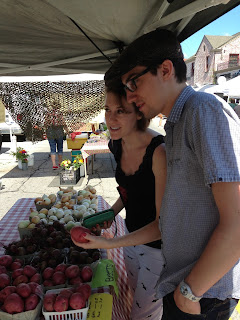 But some produce stands—usually little independent ones, rather than participants in a large farmers’ market—are parasitic. They claim to sell produce raised by local farmers, but what they really do is buy wholesale produce from big corporations and re-sell them at a higher price. I heard one story of a produce stand owner who was caught peeling off labels that the wholesaler had put on the produce. This is a particularly slimy form of fraud. You can find articles about it here and here and here. Such places are parasitic upon the desire of customers to support local organic agriculture and their willingness to pay more money to do so.

I am fairly confident that the farmers’ markets in Tulsa, where I live, are legitimate. How do I know? I don’t, of course, but here are a couple of pointers that I look for.

First, the produce looks like it came right out of the field. The tomatoes have little imperfections on them, and other produce has little bits of dried leaves. If your produce stand has tomatoes that are all the same size and color—especially if, like a nearby produce stand I no longer visit, they use a red awning to make the tomatoes appear redder—then the little fraud-alarm should go off in your head.

Second, each farmer’s market in Tulsa has a manager at a table. The manager’s job is to verify that the vegetables, spices, honey, soap—and wine!—are grown or made by small family businesses.

Keep your eyes open and your brain’s parasite-detection system active and you will probably avoid this kind of victimization.
Posted by Honest Ab at 6:51 AM