A Kind of Republican You Will No Longer Find: Example 2

Chances are you’ve never heard of James Miller, whom I described in the previous essay. But you have probably heard of Paul Harvey. Many radio stations carried his fifteen-minute program in which he gave his conservative Republican version of the news. His introduction sounded like, Stand by for news?

For him, mainstream media were intolerably liberal. He would give his right-wing reinterpretation of everything, building up to a climax that often contained the word con-damnation. But he never, ever went to the extremes that you find nearly every moment on Fox News today. And he never propagated conspiracy theories, like Tucker Carlson saying that the metric system was an instrument of world domination which America must oppose. Paul Harvey was, compared to nearly every modern Republican, a reasonable and even a nice guy. 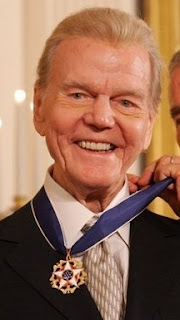 And something Paul Harvey had that almost no conservative has anymore is empathy. Harvey cared about people. This was illustrated in a frequent segment that he had called The Rest of the Story. He would tell the stories, usually of overcoming adversity, behind many famous people past and present. It was invariably an uplifting message.

Back in the 1970s, Paul Harvey was the voice of conservatism. Now, Rush Limbaugh gets the Medal of Freedom. Somewhere along the line, Republicans have become the voice of evil.

Evil, but increasingly of impotence. Trump’s Tulsa rally yesterday was supposed to be a bang-up start to an exciting re-election campaign. He chose Tulsa, where I live, because it is the most reliable of Trump’s support bases. He expected to ride a Red wave of support, and wanted to see violent protesters spewing hatred at him and destroying public and private property, so that he could appear to be the great Savior of America. None of this happened. There were a lot of empty seats at his rally inside the BOK convention center, and there were no crowds outside, so his campaign staff dismantled the outdoor stage. Trump blamed the poor turnout on rioters, of which there were none. The protests were peaceful, and their mood turned festive toward the end.

Perhaps worst of all for Trump was that he had nothing to say about any major issues in the nation or the world. Nothing about the economy or economic competition with China. He had an opportunity to call out for racial unity, and to proclaim himself the president of all Americans, not just white Americans. He could have so easily said these things, and he would have had an outpouring of admiration. Instead, he chose to call everyone who protested against Confederate statues as being “maniacs who want to attack our country,” and an “unhinged mob who want to erase our heritage.” In both cases it was clear that by “our” he meant Confederate. Trump’s hour-and-a-half speech was so uneventful that even the protesters decided to just chill out and watch the gradual demise of Trump’s boastful self-image.

This blog is dedicated to science. This includes the evolutionary science of altruism, about which Republicans used to know a thing or two but about which they are now clueless.

Makes me wish for the days of Paul Harvey again. And as he always signed off, “Good day?”