In previous essays, I have written about things I learned from reading essays by Loren Eiseley, a science writer who is now largely forgotten. In his essay The Great Deeps, Eiseley told the story of how nineteenth-century scientists believed that the bottoms of the oceans, many miles deep, contained the ancestors of all life forms. That is, life evolved at the bottom of the ocean, then moved up into the light. Some of them, such as Ernst Haeckel and Thomas Henry Huxley, believed that the entire ocean bottom was covered with a layer of protoplasm that was an intermediate between life and non-life. Huxley even gave it a scientific name, in honor of Haeckel: Bathybius haeckelii. The biggest oceanographic expedition up to that time, the voyage of the Challenger, was intended to discover the ancestors of all life forms at the bottom of the sea.

They were very disappointed. They found that the deep waters contained very few life forms. Not only that, but Bathybius turned out to not be protoplasm at all but a chemical precipitate formed by the process of preserving marine specimens with alcohol. Huxley quietly admitted he was wrong and went on with his life.

In retrospect, this should not have been surprising. If the entire ocean bottom was covered with a living slime (which they also called the Urschleim, or primordial slime), what did it eat? Almost all food comes from photosynthesis, of which there is none in the deep sea. The only food in the deep sea comes from the slow rain of dead stuff falling from the surface.

Instead, life began in shallow waters. These are the places where cells are happy living by themselves. They can stay moist and absorb all the molecules and sunlight that they need. As life continued to evolve, it invaded the land. As it did so, it had to take the oceans with it. To do this, they needed multicellular structures that maintained homeostasis (regulated conditions) within their bodies, thus keeping the inside cells as happy as they had been in the shallow seas. The leaves of trees have chloroplasts, which make their food; nearly everything else of which a tree consists is a structure that helps keep the chloroplasts happy. The same is true for your cells. Your skin, your kidneys, your heart all help to keep your inner cells close to equilibrium.

Life moved into the deep waters, not up from them. That is, the deep waters do not have primordial life; they have life that has moved into them from the shallow waters. That is why so many of the deep sea animals, such as squids and angler-fishes, are clearly the evolutionary descendants of higher life forms from the surface waters. 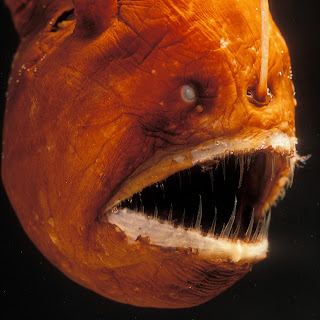 Eiseley wrote at a time before the deep sea vents were discovered. How he would have been thrilled to find out that, in some of the deepest waters, life is abundant. Microbes live by oxidizing the hydrogen sulfide from volcanic eruptions. Giant worms live by hosting these microbes inside their cells. A whole food chain of crabs and clams and such like live there. But all of these life forms are descendants of animals that live in the surface waters and on the seashore. This exciting discovery would have only proved his point more clearly than he knew. He died about the time these vents were discovered.

What scientists once confidently assumed was primordial turns out to be derived.