How to Make Your Day with Citizen Science!

How can you make an ordinary hike into an odyssey of the mind? Do some citizen science, of course!

It was a nice day in early summer, so I decided to take a hike. In Tulsa, there is really only one place to do this: Turkey Mountain, so called because it is not a mountain and has no turkeys. I could have gone to Red Bud Valley, which is a really nice place northeast of Tulsa, but the only road into and out of it is one across which trains park for hours at a time, blocking access in and out. In contrast, Turkey Mountain is near my home and is accessible.

But I have been there so many times! I almost know every trail and every tree and every rock. Of course, I always need the exercise and the fresh air. But there must be something more I could do, I thought.

There was. First, I told myself that I would deliberately look for interesting things that I might have previously overlooked. I am a botanist and I know a lot of plants, but there are quite a few that I don’t know. I did not want to carry a key with me (a big book which allows plant identification). Therefore, for many years, I just ignored the plants I didn’t know.

All of that changed with the advent of iNaturalist. Get the app on your phone; take a photo; the app will identify the species of plant (or fungus or bird or scorpion or even bacteria in some cases; it identified Nostoc commune for me, the star jelly, a cyanobacterial mat); upload it to a database with millions of observations. Therefore, I deliberately looked for new things. iNaturalist can identify plants even from crappy phone images; I verified them when I got home. Perhaps the best part is that your observation is added to the database right away, and anybody in the world can look at it, though it appears to be limited to North American observations. Within seconds you can contribute to a worldwide scientific database. Such is the power of citizen science! Bring it along with you on your hike. Participate in citizen science.

(I know you are wondering. Star jelly is mat of single cells that looks like black dried snot except that it comes back to life whenever it rains. Way cool. For centuries, it has been considered extraterrestrial in origin, e.g. asteroid poop. And an article in the magazine Fate, to which I am afraid to link, still says this. If I wrote horror novels, I would have a giant star jelly attacking Godzilla. How about, Attack of the Killer Star Jelly?)

Here is an example of how participating in citizen science helped me learn things. I had always wondered what the grass was that grew along the trail in the forest. I found out it was a panic grass (genus Dichanthelium). But as I looked, I saw the “grass” was mixed in with a rush, Juncus tenuis. They look alike until you look closely.

But this is not, so far, actual science. Somebody might use the iNaturalist database to conduct scientific research, but if I just uploaded images, I was still a participant rather than an actual scientist.

Then I noticed something. It is the peak flowering time for wild carrot, Daucus carota, also called Queen Anne’s lace. 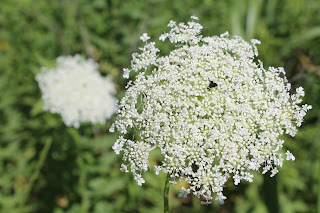 One of the strange things about the bunch of little flowers (called, in this case, an umbel) is that in the very center there is a purplish-black knob which is actually an undeveloped flower. Why is it there? I remember us botany students discussing it back when I was in grad school. Maybe, I thought, I will look it up when I get home. But instead I decided to do some science.

I noticed, first, that some of the umbels had the knobs and some did not. Second, I noticed that there seemed to be more pollinators on the umbels with knobs than those without. The hypothesis popped into my head: the knob looks like a pollinator, and it attracts other pollinators. The insects think that, if there is already a pollinator present, the umbel must be a good place to eat.

Nice idea. Now, to test the hypothesis. I needed to find a big sample of umbels with knobs, and umbels without knobs. Just looking at some of the many umbels along the trail, I found a total of 232 umbels: 136 with knobs, 96 without. I then counted the number of pollinators on each flower, and recorded these numbers on my phone notebook. (I stopped using paper when I found that sweat would destroy my paper notes.) These are the results I got:

The results seemed clear: flowers with the black knobs attracted more pollinators: there were fewer knobbed umbels without pollinators, and the average number of pollinators was greater.

Notice some things I had to take into account in designing this little survey.


I needed a large sample size because there are many other factors at work in this system. Pollinators do not behave independently of one another. They tend to move in groups, which means that, inevitably, some knobbed umbels will remain unvisited, while some un-knobbed umbels will have pollinators, even if the pollinators have a clear preference for knobbed flowers.

The next step was one I did not have time to take, and is beyond the reach of most citizen-scientists: statistical analysis. Almost any result can occur by chance. This result does not seem to be due to chance, but a statistical program on a computer (if you can afford one) will calculate the probability that the results are due to chance. You can’t do this on your cell phone. Not only do you need a program, but you need to know what you are doing. With all of those zeroes (39% and 47% of the observations), you cannot do regular parametric statistics. If you do, and get a very significant result, it is probably okay, though. But unless you have a computer program, you can’t do either parametric or nonparametric statistics. Back in grad school, we did it laboriously by hand. On clay tablets (just kidding).

Okay, now it’s time to look at the literature. Why is there a purplish-black spot in the middle of the umbel? Legend has it that Queen Anne, an avid lace-maker, pricked her finger and left a drop of blood in the middle of the lace. But, let’s stick to science. My hypothesis, that the black knob attracts insects, is the leading explanation, according to The Carrot Museum in the U.K. (You read that right. There is, in fact, a Carrot Museum, although it is online. It is dedicated to the history, evolution, science, sociology, and art of the carrot.) If I had not stopped to do some citizen science, I would never have been provoked into searching online and discovering the Carrot Museum.

But according to a 2013 article in Plant Species Biology, the dark knob in the middle of the umbel does not attract pollinators. This study used videography and triangulation. So, who is right? Me, or those authors? This raises an interesting possibility: maybe the dark knob attracts pollinators sometimes, but not others. I just got lucky. We were both right.

Then there is the possibility that the dark knob is simply a developmental oddity that is harmless and that neither natural nor artificial selection has eliminated.

Now, was this an interesting hike or what? Oh, those poor people who run or walk along with earbuds, thinking that the natural world is not interesting enough for them! But if you are reading this you probably don’t have this problem.