The Evolution of a New American Religion

In America today, a new religion has evolved: the worship of Donald Trump. Many or most of his supporters (or should I say His?) worship Him. They do not merely support Him. They have made Him into the representative of God upon the face of the Earth. Not all Trump supporters do this, but several million of them do. I will explain and give five ways you can tell that, to many Trumpers (His word) it is a new religion.

Religion is an instinct. Everyone has it, though some people (who consider themselves atheists) have psychologically diverted it into a different form. And religion is a universal instinct within the human species: all humans, and only humans, have it. Religion must provide a strong evolutionary advantage, or else it would not pervade the human species.

Religion evolved because it promoted evolutionary fitness of individuals. First, individuals who are members of a religious tribe benefit from the success of that tribe; a tribe whose religion causes them to fiercely fight other tribes, slaughtering them not merely as enemies but as heretics, benefit from the resources they get from the other tribes. Second, leaders of the religious tribe benefit within the tribe because they get more resource and reproductive opportunities. The rest of the tribe reveres them for their spiritual leadership. Today, many charismatic religious leaders get lots of money and sex from their brainwashed followers; this must have happened thousands of years ago also. The genes of the charismatic leader, including the genes for having intense religious experiences, are thus over-represented in the next generation.

Consider this photo, taken in rural Oklahoma in September 2020, in the run-up to a presidential election many of us are nervous about, since Donald Trump has not been very clear about whether he would give up power even if He loses. In this photo, a rich Trumper (a large house is a mile away surrounded by lawn which must take a couple of thousand dollars to mow, which is done frequently) has two flags: an American flag, and a Trump flag, both at the same height. In flag display protocol, the American flag should be highest, the state flag next, and other flags below them. This supporter, first, considers Trump to be equal to the United States in importance; and, second, that the United States has no value apart from Trump. 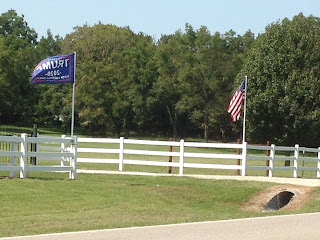 Here are the five characteristics that make Trumpism a religion:

There are my five reasons. One of my Facebook contacts just wrote, “God is all in all. He will guide Trump.” This is a statement of faith—not in God, but in Trump. Why not just admit that Trump is merely a human being, whether you support Him or oppose Him? Because He has made Himself into a Messiah. Fortunately, not all Trump supporters worship Him—I know some who do not—but enough of them do that America could be in for some severe problems.

Could this turn violent? Might Trumpers get out their guns? I hope not. But some Trumpers are piling up weapons—one of them told me so. And it has happened before, when religion has inspired mass slaughter. During the St. Bartholomew’s Day Massacre of August 24, 1572, Catholics killed thousands of protestant Huguenots in Paris. Then as now, Paris was one of the most civilized cities in the world. This isn’t ancient Babylonians we are talking about here, much less savages. Germany was very civilized when the Nazis arose to power.

If the Trumpers do attempt to grab power (if they lose the election) through violence, they will fail. The armed forces, sworn to defend the Constitution, will not support them. But they can cause a lot of domestic terrorism on the way down.