Who Remembers the Threat of Nuclear Holocaust?

Back in 1984, many of us were worried that the election of Ronald Reagan would usher in an era of nuclear conflict. He rattled his sabers and was cheered as a war hero by the conservatives. Then it didn’t happen. Instead, he was open to the overtures of peace from a Soviet Empire that was, we now know, rapidly crumbling.

But back in and before 1984, there was no shortage of books that addressed the existential challenge of nuclear annihilation. One such book was The Caveman and the Bomb, which drew a comparison between the human desire for war and a Neanderthal mentality. It was quite a long and detailed book, but is perhaps best remembered for its cartoons, of which I provide four: 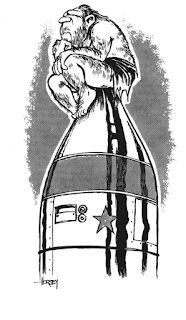 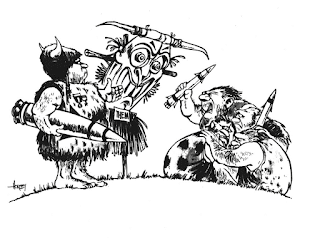 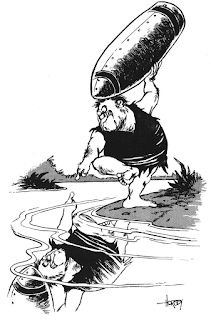 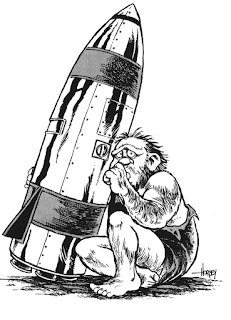 The authors tried to sound upbeat and, in so doing, addressed some fundamental issues. “We can say no to our Neanderthal mentality, to our genes. We are the only creatures on earth who can do this. We have this opportunity because our genes whisper to us, they do not shout…We can be greater than the sum of our genes. If that is our decision, evolution can’t do a thing about it. Making that decision is the supreme test of our humanity…”

It turned out to not be the supreme test of our humanity. As it happened, the Soviet Union simply could not keep up its military expenditures and needed a way to emerge from the arms race without losing too much face. I do not believe that either they or we have become better people as a result.

Today, we may not face an imminent nuclear threat, but the weapons are still there. And Trump, unlike Reagan, is a man who is just unstable, egotistical, and hateful enough that he might goad the other nuclear powers into new confrontations.