Opus 700: When Botany Was All the Rage

Throughout the nineteenth century in Europe and America, botany was extremely popular. It was not unusual for a popular botany book to sell a quarter million copies. It was not uncommon to see someone taking a botanical hike, carrying a vasculum on a strap around the neck. The vasculum was a metal cylinder with a little door. Inside the cylinder, the collector would place fresh plant specimens, which would stay moist by means of damp cloths. The collector would go home and press the plants in a plant press in order for them to dry and be suitable for mounting on paper for a collection. Doesn’t sound like your idea of a good time? It would have 150 years ago. In this drawing, a wise old botanist is explaining plants to some utterly fascinated young men. 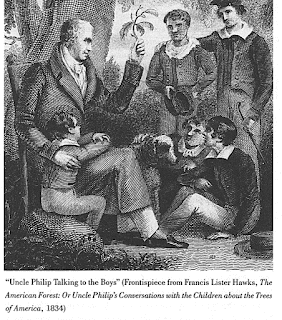 Why was “botanizing” so popular? Elizabeth Keeney, in her 1992 book The Botanizers, gives some reasons. The drawings and quotes posted in this blog come from her book.

First, botanizing was a mentally and physically good form of exercise. Looking at and collecting plants was a good way (and still is) of getting people to think about the world around them. It helped them to notice the tremendous diversity of life that they would otherwise not notice. And this would, in turn, make them more relaxed. We know from scientific studies today, as they knew from experience 150 years ago, that walking in the woods leads to relaxation. People also knew, especially if they had indoor jobs, that they needed exercise. One man even got his exercise by carrying shovelfuls of soil from one side of his basement to the other, then back to the first side. This was just boring, repetitive exercise. But taking a botany hike was also exercise (especially if you climbed a hill) and was interesting. One author wrote, “Many boys and girls go through the world, almost without seeing it. Now he who has eyes and does not use them, in such a beautiful world as this, is very much to be pitied. But the study of Botany will learn [sic] him to keep his eyes open…” especially to keep from blundering into the poison ivy.

Second, it was sometimes a popular way for men and women to meet one another. In one case, a man and a woman met on a botanizing expedition, later got married, and spent their honeymoon collecting plants. It was not unusual for colleges to keep men and women entirely separate—separate gardens, separate sidewalks—except on botanizing expeditions, where males and females could mingle. I wonder how many first dates today would go better if the couples went botanizing rather than to a dinner or a movie. On a similar note, botanizing was considered a safe form of recreation for delicate young women, as in this drawing. One author wrote, that botany was sufficiently refined for female attention. Flowers, with their “fragility, beauty, and perishable nature,” were like “a pure-minded and delicate woman, who shrinks even from the breath of contamination.” Males and females were not supposed to meet in bars, and meeting in a parlour at home was stuffy, so why not meet on a botany trip? Sounds fun to me, especially if the young man and woman have to hide under a bush to get out of a sudden rainstorm. 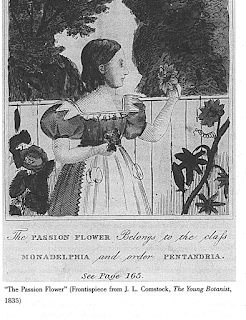 One author wrote, “In botany all is elegance and delight. No painful, disgusting, unhealthy experiments or inquiries are to be made. Its pleasures spring up under our feet [and] reward us with health and serene satisfaction. [No one could] pollute its lovely scenery with unamiable or unhallowed images…[Botany is] among the most innocent things in the world.” At least, so it would seem, until you realize that flowers are sexual structures with their organs all out in the open.

Finally, to some religiously-minded scientists, botany was an excellent way to see the mighty hand of God in the natural world. Studying plants will incline your mind to holiness. One botanist who championed this approach was Asa Gray, the Harvard botanist who, incidentally, was the major American proponent of the theories of Charles Darwin. Here is the cover page of Asa Gray’s botany book for young people. 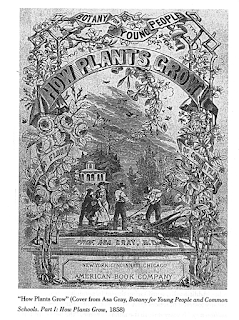 The good news is, you can still go botanizing. Just find a like-minded friend for a hike, or take a hike by yourself. Even if you take the same hike over and over, you will see things changing over the seasons. Gotta go now; my wife and I are going to take a botany hike.