Guillotines and Other Instruments of Mercy

Several methods of execution, which we consider to be cruel, were actually invented in order to make the process of execution more humane, in several ways. For example, some were invented to hide the identity of the executioner, who was only obeying orders and did not want to receive animosity from the family and friends of the victim who were watching. Others were invented to make the execution itself less painful. 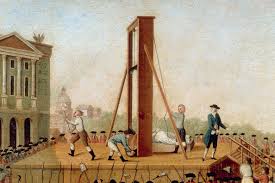 Through recent history, executions have become more humane and also less common. Unfortunately, torture remains very common, even when it is called “enhanced interrogation techniques” by supposedly humane nations. Further, assassins give no attention to reducing pain. When the Russians use nerve poison to assassinate victims, the pain of the victim is their last thought. And terrorists, whether Muslim jihadists or Christian white supremacists, probably consider their reputation enhanced by not only the suffering of the victim but the shock of entire nations.