The Scientific Method--In a Comic Book

As part of the process of learning French, I read a French comic book called La Page Blanche (the blank page). In this unlikely place, I found lots and lots of examples of hypothesis-testing. This comic, though not openly related to science in any way, was a celebration of the adventure of scientific discovery. 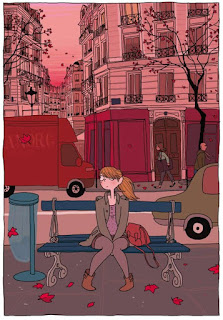 A young woman (Éloïse) has just experienced an emotional shock so great that she has lost her memory. Sitting on a bench, she realizes that she does not remember how she got there, where she lives, where she works, or even her own name. She partly reconstructs this information from documents in her purse and on her cell phone. She finds her address, then figures out train routes to take her back home. When she finally gets to her apartment, she has no idea what to expect when she enters.

At this point, her scientific reconstruction of her identity goes into full swing. She does not know how long she has been missing. A neighbor, whom she does not know, welcomes her back tells her that her cat has been mewing, unfed, for about a day. She imagines different possibilities for what she might find inside her apartment. A slob partner who drunkenly awaited her return from work so she could cook supper? A murder scene? A surprise birthday party? Her partner (if she had one) in flagrante delicto with another woman? Gangsters? A law enforcement team happy at the reappearance of the lost amnesiac? In each of these scenes, a cat mews. She opens the door to another mystery: an empty apartment with a cat.

Éloïse then uses the apartment to partly reconstruct her life. She does not remember whether or not she has a partner. She tests the hypothesis “I live alone” (J’habite tout seule) in two ways. First, if she had a partner, the cat would have been fed. Second, she finds just one toothbrush in the bathroom. She finds pictures of people she does not know and of trips she does not remember having taken on the wall. The photo of New York City showed the Twin Towers, so she concluded the trip was before September 11, 2001. (The book was published in 2013.) None of the pictures, receipts, etc., help her very much. She even wondered if the swollen red spot on her neck might be a clue, but after imagining dramatic scenarios, she concludes it must just be a mosquito bite (piqûre de moustique). In this cartoon book, as in science, many hypotheses lead nowhere.

Éloïse finds her computer but does not know the password. She has to come up with a creative way to find out. She finds out where she works (a bookstore) when she gets an angry phone call from her manager. She has a vague recollection that the password was an American male first name. It turns out an information technologist at work had reset her password recently and was astonished that she had already forgotten it. The information now available to her on her computer still left a lot of things unexplained. Her only hope was to confide in a co-worker who was a Facebook friend. The empathetic co-worker encouraged her to see a doctor and then a psychiatrist. It is not clear to me whether she did or whether she imagined that she did, because the panels depicting her medical visits had extreme cliches of doctors, medical visits, and psychiatrists. They all told her there was nothing wrong with her body or brain…

And so on. The scientific method can be the basis of an entire plot, and I don’t mean just science fiction or mysteries, into neither of which categories this book fits. Science is an adventure of discovery, and it can show up in places where you least expect it.