Arizona Ballot Audit: Miracles in the Service of Racism

This week, the Arizona re-audit of 2020 election ballots received international attention. This is a science blog. The Arizona re-audit of ballots provides a good opportunity to examine the process of scientific inquiry, in fact the process of determining the truth, and the results are not pretty. They indicate a strong tendency within the Arizona Republican Party, and the Republican Party in general, toward racism. 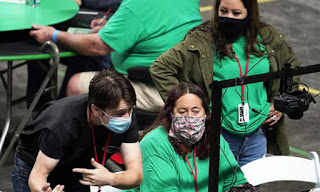 Most Arizona Republicans are, we assume, not racist. But enough of them are that they have started a conspiracy theory: that 20,000 ballots were flown in from China pre-marked for Biden and Harris; that these ballots were stuffed into ballot boxes, thus contributing to a Democratic victory in Arizona. And the rest of the Arizona Republicans, even those who call the conspiracy theorists crazy and unhinged, are going along with them in support of the re-audit.

I will apply some of the ideas in my recent book, Scientifically Thinking, to this claim, not because the conspiracy theory deserves any examination, but in order to learn some things, some very disturbing things, about Republicans.

First, there is open and obvious bias in the re-audit. The contractor conducting the audit is called CyberNinjas. With a name like that, the far-right Republican bias of the contractor is obvious. They are looking only for things that will, in their estimation, prove the Chinese connection, and can easily overlook any evidence to the contrary, even if individual employees do not intend to do so.

Second, the conspiracy claim is untestable. If the Republicans find any ballots that they consider to be fraudulent, they will claim that they have proven that the election was stolen—a claim that Donald Trump still makes, and that about half of Republicans believe with religious fervor, even if they do not believe the China theory. But if they do not, they will merely claim that the fraud was so perfect that it left no evidence. That is, the conspiracy theorists have already decided that they are correct, no matter which conclusion is reached by the audit.

Third, is their scenario even possible? How could China have gotten 20,000 ballots slipped into ballot boxes in Arizona? Did Chinese nationals carry ballots with them to the United States, travel to Arizona, and cram the ballots in? Is there any evidence that there was an influx of Chinese nationals going to Arizona? Or, perhaps, the Chinese government sent them to Chinese nationals who were already here. Since there is no evidence of Chinese nationals visiting Arizona or stuffing ballots, then it must have been Asian Americans who did it and did so without leaving any evidence. Sneaky devils! And that is my point. This conspiracy theory is racist because it buys in with widespread hatred of Asian Americans, which came to national attention in 2021. It would require supernatural powers for the Asian Americans to sneak the ballots into the boxes, and to coordinate this activity among themselves without the use of social media. That is, they would have to be demons. This is something that some Arizona Republicans believe, and the others are willing to consider as a possibility.

None of this really matters, of course. The Arizona Republican racists will continue to claim that Trump won the state and national election, even without ANY evidence to back it up. To them, it is a matter of religious devotion. Former Republican Senator Jeff Flake (warning: this site has a paywall and may demand money from you to look at the article) said in a radio interview on May 14, 2021 that his party (if they allow him to remain) is in denial of reality. I would go further and say that they do not believe there is such a thing as reality except whatever Donald Trump asserts. That is their entire reality.

This is such an extreme position—not simply unscientific, but against the very basis of human consciousness—that some Republicans are calling for others to form a new party.