Our Continuing Shame of Racism: A View from 1964

The days are counting down here in Tulsa for the hundredth anniversary of the Tulsa Race Massacre, which started on May 31, 1921. For many years, is event, in which white Tulsans burned to the ground the prosperous Greenwood district, in which black people created thriving businesses. It has been difficult to get very many facts about what happened, even a total count of how many were killed (mostly? all?) black, of what kinds of atrocities may or may not have been carried out. Newspaper accounts from the time vanished from microfilms, and a police box of photographs has vanished. You can, and I plan to, read more about it in Scott Ellsworth’s The Groundbreaking.

The commission that has planned the commemoration used to include Republican Governor Kevin Stitt, but when he signed the bill that effectively outlawed teaching the history of racism in Oklahoma, the rest of the commission removed him from membership. Stitt attempted no defense of his actions.

The oppression of blacks (and even more so of other minorities) in America has tarnished our international reputation, even now that the president who at least went along with it is out of office. Every time there is a new police shooting of an unarmed black man by a white officer, especially when no action is taken, as recently in North Carolina, the world thinks more and more of us as a land of racial oppression. This is something that even Joe Biden cannot change, and the world knows it.

My point in this essay is that this has been going on for a long time. In 1964, Jorgen Bisch visited China, in the heyday of its Maoist oppression, and wrote an article about what he saw for National Geographic (published November 1964). One of the things that he saw, and that alarmed him, was “communist propaganda.” Schoolchildren had written essays about how white Americans oppressed blacks. The author saw some of those essays posted on a wall, and took a photo of them. 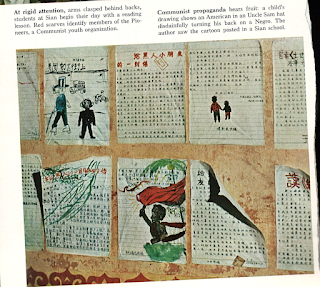 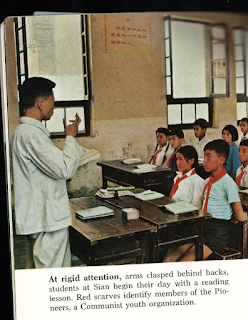 In one of the essays, a white Uncle Sam is walking away from a black man. In another, a black American is holding up a red flag of liberation from racist oppression. Look at this photo, because I very much doubt you will see it anywhere else.

At that time, white Americans really were oppressing and sometimes killing blacks, and worse was to come. This bad image of Uncle Sam was justified. Resentment toward America was justified.

We recognize, of course, that the Chinese government was far worse, not just toward its own citizens who appeared to even slightly differ from Chairman Mao’s views, but also in the way it treated its own minority groups—to the extent that you may not have even known that there were minority ethnicities in China. Even the normally meek Joe Biden has called China’s treatment of the Uyghur minority “genocide.”

I believe we are not as bad as the communists were and are. But it sure doesn’t help much when we project to the world the racist hatred that we do have. Our right-wing extremism plays right into the propaganda machines of our competitors and potential enemies.

And we use Christianity to justify it. I recently went to a fundamentalist church meeting in Durant, Oklahoma, where the speaker proclaimed that the new requirements to teach about racism were satanic. He meant this literally. His evidence was that the watchwords for the fight against racism were Diversity, Inclusion, and Equity—the first letters of which spell DIE. This shit is so extreme that you can’t make it up. The speaker digressed from his theme only long enough to proclaim that Biden stole 41 million votes (I did not make this number up) from Trump.

This is a blog about science and evolution. This essay, like many others, reinforces the theme that there is no biological or evolutionary justification for racism.

Armed protests are planned for the Race Massacre commemoration. What could possibly go wrong? As a white-presenting Tulsa resident, I’m getting a little nervous.