Bring It On, Comrade: We Love Being Vulnerable

Our energy system is wide open to Russian cyberattacks and we are just fine with it. Go ahead, comrade, bring it on. Shut us down so that we don’t have any oil and gas. We’re lying here with our fat bellies to the sun just waiting for you to stab us.

By now everyone has heard about the cyberattack on the pipeline in the eastern US that briefly shut down supplies of oil and gas to the southeastern US. Colonial Pipeline paid $5 in ransom to the attackers in cryptocurrency. The cyberattackers were merely identified as Eastern European.

But what if the price they asked was too high, and the pipeline continued to be shut down?

Or what if the cyberattack had been on Cushing, Oklahoma? This is the town through which all the oil and gas for the entire country flows, or so I am told, though I find this hard to believe. It does, however, have an effect on the oil industry all out of proportion to its size: it stores 13% of the oil in America. 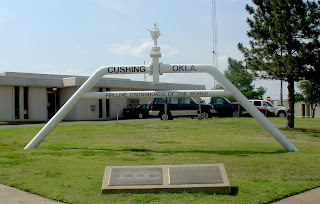 Most of the problems with the Colonial Pipeline cyberattack was panic buying by people who feared that they would be temporarily without gasoline. But what if the cyberattack was prolonged, or if it shut down Cushing?

Because of pipelines, our oil supplies are vulnerable to attack—formerly physical attack by terrorists, and now cyberattacks by our comrades overseas. There is not much we can do about this. Oil comes from wells, travels through pipes, to refineries and then to retail points.

But renewable energy is not usually so vulnerable. You can collect solar energy, either passively through mirrors or directly into electricity, anywhere. It can be distributed on a local grid. And the wind blows everywhere. I suppose cyberattackers could shut solar and wind energy down, but it would take thousands of attacks.

We have known this for decades. I grew up in Cushing. We moved away in 1964. My parents told me, while we were there, that Cushing was at the top of the Soviet nuclear hit list, because of the oil “tank farms” and pipelines.

Not only to prevent global warming, but also to prevent cyberattacks that can cripple our energy system, we need to make a rapid transition away from fossil fuels, even if Comrade Trump insists that we should not.