As I walked through the weeds between the early-successional trees in the field about which I earlier wrote, I noticed a Solanum dimidiatum weed (horsenettle). It was in the same genus as the potato, a close relative of the tomato. And it had what looked like little green tomatoes on it. This is the time of year when tomatoes are really good. But if you think these tomatoes might be delicious, think again. The entire plant is filled with toxins that are dangerous, even deadly, to most animals. 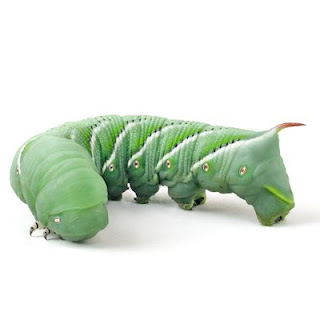 The horsenettle plant expends a lot of its energy creating these toxic compounds [what are they]. Expensive they may be, but they protect the plant from having its leaves eaten by most animals. But there is at least one group of animals that can eat the leaves as if they are not toxic at all. The sphinx moth (Sphingidae) caterpillars (hornworms) of the genus Manduca can eat them with little effect on their growth. I know this because I have measured the growth of hornworms when they ate ground-up horsenettle leaves and when they did not; their growth was the same. The toxins do not protect the horsenettles from hornworms, but in many cases, there are no hornworms about. The plant is taking a chance. It invests in imperfect, but usually good, protection.

You may wonder how to compare hornworms that eat horsenettle tissue and those that do not. To what do you compare the ones that do? This is an interesting story. You can purchase little hornworms, special vials to grow them in, and hornworm chow. They do not naturally eat this chow, but if you start them on it when very young, they will eat it and grow grossly big. It is sort of hornworm junk food. The control worms are the ones that eat only the chow; the experimental worms have horsenettle tissue mixed in with the chow.

Herbivores, and the defenses of plants against them, are a constantly moving evolutionary target. They hardly ever get it right, but they come close enough that there are lots of plants, and lots of herbivores, in the world. Any plant that invested too much in defense would grow slowly and die; but if it invested too little, it would disappear down the gullets of extinction. There is a balance of nature, but it is imperfect and shifting.