Where Has Optimism Gone? Reflections at the End of the Year

In the process of downsizing my library, I ran across a book that was important in 1990: The Decade of Destruction, by Adrian Cowell. The decade he referred to was the 1980s, and the destruction was of the tropical rainforests. And he was optimistic. As Cowell explored the Amazon rainforest in the 1980s, he saw that there were no groups who were trying to save the Amazon from destruction. By 1990, things looked very different. There were many rainforest conservation groups, not just in developed countries (think Rainforest Action Network) but also many local groups in the Amazon. Cowell wrote his book just as Lula da Silva was coming to power as Brazil’s prime minister, and he had appointed a sincere conservationist, Jose Lutzenberger, as Secretary of the Environment.

I think it is safe to say that optimism related to the Amazon rainforest is receding quickly. Lula da Silva was a disappointment, and “Lutz” quickly departed the scene. The 1980s was the time of the movie The Emerald Forest, when it seemed like the way to save the rainforest was to allow tribes to go back to their primitive way of life and leave them alone. But few such people exist anymore. Further, we cannot protect the Amazon rainforest merely by leaving it alone. Global warming is already causing destructive wildfires in the Amazon Basin, a process that is predicted to get much worse in upcoming decades. Already, the Amazon is a net emitter of carbon dioxide.

While I was mourning the inexorable destruction of the Amazon rainforest, I followed the news about the wildfire destruction of the giant sequoias in the Sierra Nevada of California, which just barely missed Giant Forest in Sequoia National Park. When I was a child, Giant Forest seemed the closest thing I could imagine to Heaven on Earth. I thought this when I was a Christian fundamentalist, and continued thinking it when, later, my religious views were less well defined. But there is no more hope for the ancient North American forests than for the Amazon.

Here is an image from Rainforest Action Network, in which you can see the border of Guatemala and Belize, with rainforest destruction on the Honduras side. 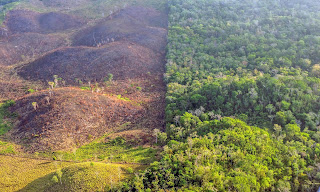 I feel, and I sense that many others feel, a sense of resignation. We live in a dysfunctional economy and society, in which I feel lucky each day to simply not be killed. Wildfires in the west and almost weekly hurricanes in the southeast are the new normal. It is now almost normal in the summer, in Oklahoma, to see the sun dim and red while it is yet far above the horizon, because of smoke from western wildfires. I am giving away Cowell’s book in part because I can hardly bear the thought that there was a time when many of us felt optimism.