Adaptive Stories: Another Message from Fluff the Cottonwood Tree

This is Fluff the cottonwood tree (she/her/hers). I think this is my sixth message that Stan has agreed to post for me on his blog. I live about a half block away from his house in Oklahoma.

Adaptation is the process or the outcome of evolution in which populations become more successful in their habitats. If you want a more detailed discussion of adaptation, read about it in Stan’s Encyclopedia of Evolution. But you get the point.

Adaptations sometimes seem obvious. For example, leaves are flat because this allows the green cells inside them to absorb more light and allows them to absorb the yummy carbon dioxide more quickly. For such adaptations as these, it is easy to figure out the reason for the adaptation.

But other characteristics are more difficult to explain. Look at this photo of cottonwood leaves. Aren’t they beautiful? I have now shed all of my leaves for the winter, but about three months from now I will grow thousands of new ones. 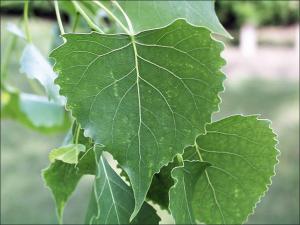 Notice the teeth along the edges of my leaves. Truly artistic! I’m not bragging, but do you humans have anything this beautiful about your bodies?

But are these teeth an adaptation? Stan insists that they are. Toothed leaves, said Stan, are better in cooler climates, and he showed me a website that made this very point. But there are plenty of exceptions to this pattern. Maybe this is just an adaptive story, insightful but not necessarily true. Maybe trees of the genus Populus, including me, just have a genetic tendency to have toothed leaves, and we also happen to live north of the tropics. These two facts may not be connected at all.

An even better example of an adaptive story is about fluttering leaves. My leaves, as those of all cottonwoods, poplars and aspens, flutter in the wind, creating a delightful shimmering sensation. All leaves move in the wind, producing a sound called susurrus (one of Stan’s favorite words), but my leaves and those of my evolutionary relatives don’t just rustle in the wind; they almost twinkle. Some aspens are called quaking aspens, or trembling aspens, because of this most obvious and beautiful characteristic. This occurs because our leaf petioles are flat rather than round.

Botanists like Stan say that this fluttering movement increases the rate at which carbon dioxide gets into our leaves. Sorry, Stan, but that is almost certainly just an adaptive story. Of course, fluttering leaves absorb more carbon dioxide; and almost any fast-growing plant benefits from having lots of carbon dioxide. Why, then, is it just us members of the genus Populus that have this characteristics? Why don’t sycamores, which like us grow along rivers, have fluttery leaves? There are some that live only a few meters away from me.

To tell the difference between an adaptive story and a scientific explanation, you need to not only explain the advantage of the characteristic, but why you don’t see all organisms that live under the same conditions with that characteristic.

Cottonwood leaves flutter, and as a result we have more photosynthesis. But other trees achieve the same result in different ways. There is no answer to the question of why my leaves flutter in the wind more than those of sycamore trees. Meanwhile, just look at my leaves and admire them.