However, without science, close observation is just tedious. There is no point in looking closely at the world if you are just going to make a compendium of random things that you see without understanding how they work.

I was reminded of this recently when I ran across my copy of The Mezzanine by Nicholson Baker. He called it a novel. But it had no plot. Or, as David Gates, a reviewer for Newsweek, said, “a plot that is completely out to lunch.” [2 January 1989] 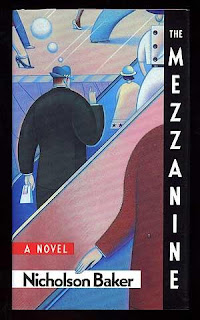 Here is the plot. A man (Howie) rides an escalator during his lunch break to buy something. Then he went back to work. I think that’s pretty much it. I don’t think I missed anything in the plot.

It was not a novel. But that’s fine. It might have been better marketed as an exercise in close observation. Baker was encouraging his readers to start looking closely at and noticing even the most ordinary aspects of the world around them.

This is a wonderful objective. The problem is that Baker did not seek to understand anything that he saw. When Howie saw something that he did not understand, he simply speculated about it based on random and inadequate knowledge. I wrote in the margin of the first page, “I love it when someone writes awesome things about ordinary events; but this author writes ordinary things about ordinary events.”

When Baker wrote about the beautiful sounds of farts, I laughed out loud, because it stood out as the only thing interesting in the whole book.

Maybe somebody should write a book in which the first-person observer looks as closely at things as did Howie, and then thinks about the scientific explanations for them. Science is hiding in every little cranny of ordinary life. Baker wrote about farts. Why not write about the incredibly fascinating world of intestinal bacteria—nearly all of them beneficial to our bodies—that produce the gas? He wrote about his unsuccessful attempts to conquer insomnia. This was not merely counting sheep, but an entire discourse—in a footnote—about how the sheep are delivered to his apartment by a sheep dispatcher. But he could have written about the two entirely separate sets of motor nerves, one of which awakens us, the other of which relaxes us, instead of the details of his failed attempts to sleep. Instead of annoyingly trivial guesses, the result would be a new appreciation of our bodies.

Baker has made a career out of taking fascinating ideas and making them dull. His novel—maybe this one actually was a novel—The Fermata was about a man (named Arno, even more annoying than Howie) who found that by sliding his glasses down his nose he could make the whole world go into suspended animation except for him. This is an astonishing premise. What wonders a competent writer could create from this! But Arno just piddled around with not-quite-sex. I wish I could write a novel about how a man with this ability might change the world or at least have exciting adventures. But I cannot because Baker already ruined the premise.

Yes, a scientist should write a book like The Mezzanine or The Fermata and make it actually interesting. But it won’t be me. Nicholson Baker has already poisoned the water. If I proposed such a book to my agent, she would probably say Baker already did that, and ruined any possible chances of anyone else doing it better. That is, assuming she remembers either of these books. She told me the publishing industry has a short memory.

A short memory can be, in certain cases, a blessing.