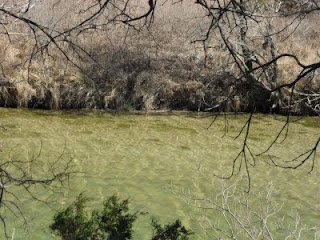 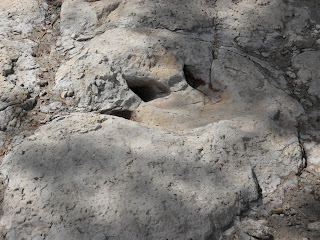 On the weekend of March 5, I visited two creationist museums (see previous seven entries). One was the museum in which Carl Baugh had displays which, he claimed, proved that humans and dinosaurs left footprints in the same layers of mud.

Before I went home, ending my fun creationist weekend, I visited Dinosaur Valley State Park to see some real dinosaur footprints, still in the river bed (see bottom photo). The water is high in spring, and only a few prints were visible: round holes that are the footprints of large herbivorous Paluxysaurus dinosaurs, and three-toed footprints of small carnivorous Acrocanthosaurus dinosaurs. Some of the prints are visible under water, especially when green algae grow inside of them (see top photo). This was the part of my Texas trip that was refreshing and realistic, and I recommend a visit to this park if you are in the area.

Before I left Glen Rose, I did one more thing that altered my mind. I stopped at a barbecue place. It is well known that you can throw a rock anywhere in Texas and it will hit a barbecue place better than almost any other in the world. I had the brisket. The waitress brought me a pile of meat. It was pretty good, but it usually takes me a week to eat this much meat. I quite literally left Glen Rose feeling like what I thought a Neanderthal would have felt like. Neanderthals, you may know, ate mostly meat, according to scientists who have studied their coprolites. But recently a scientist studied Neanderthal tooth deposits and found that they also ate grains. Well, I suppose they must have had a piece of Texas toast with their barbecue.