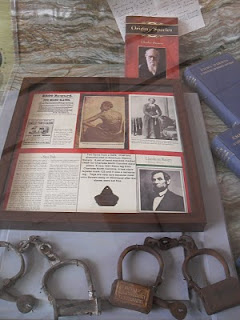 On March 5 I visited Carl Baugh’s Creation Evidences Museum near Glen Rose, Texas. In the previous entry, I described some of the displays. But the most prominent display of all, nestled among scriptural scrolls, is the Darwin display. All it has in it is a few of Darwin’s book, one of which has one of his more lugubrious photos on the cover, and a collection of slave shackles and handcuffs (see photo).


The message is clear, just as it was in Bill Gordon’s museum in Oklahoma: belief in evolution causes human oppression and slavery. If you believe we evolved, then you think people can be treated like animals, but if you believe humans were created, then you will treat them like fellow children of God. The footprint displays were lies; but this one was a damned lie.


First, consider the clear message that it proclaimed: Darwinian evolutionary science causes such things as slavery. As anyone knows who has read the masterpiece 2009 book by Adrian Desmond and James Moore, Darwin’s Sacred Cause, both sides of Darwin’s family were abolitionists, and Darwin detested slavery. Moreover, Darwin transferred his early belief in the common origin of all human races from Adam and Eve into his later acceptance of the common evolutionary origin of all human races. Desmond and Moore’s book also documents the creationist beliefs of American slaveholders and their scientific sympathizers. Louis Agassiz was most notable among them, but there were many others. If we must draw a causal inference, it would be that because slavery was forced out of existence during the period of history in which scientists and some societies and churches accepted evolution, then evolution deserves the credit. No causal inference either way is, however, justified. Certainly Darwin did not cause black American slavery. This is something only hypnotized victims of Baugh’s sermon could believe as they glanced at the displays.


Second, consider what the display did not mention. The history of Christianity in the western world for the last two millennia has, until very recently, been the story of murder and oppression. Ask any Huguenot victim of the St. Bartholomew’s Day Massacre if Lamarck caused their plight. And nearly all of the five hundred sovereign Native American nations had been conquered, and many exterminated, by Darwin’s time. It was religious zeal (and greed and plunder) that caused the Spanish settlements started by Columbus to enslave, then torture and kill, the Caribbean natives, against which the lone Christian voice was Bartolomé de las Casas. The Pilgrims, so much revered by creationists and other Christian conservatives, surrounded Pequot villages, set them ablaze, and shot anyone attempting to escape. Here is what William Bradford wrote: “It was a fearful sight to see them thus frying in the fire and the streams of blood quenching the same, and horrible was the stink and scent thereof; but the victory seemed a sweet sacrifice, and they [the colonists] gave praise thereof to God, who had wrought so wonderfully.” While massacres based on the Christian religion are today rare, the uncomfortable fact remains that one of the conservatives’ favorite books of the Bible is Revelation, which depicts a violent Jesus making the Earth run red with blood.


Baugh’s display added stupidity to dishonesty. It was not until I got home and looked at the photograph (look at it again!) that I noticed that one of the slave shackles was from the “Georgetown County Plantation Police.” The printing seemed awfully crisp to be on a real, well-used slave shackle. So I googled the name. It turns out that fake Georgetown County Plantation Police paraphernalia are sold on the internet. Badges are more popular, but you can get the shackles on Amazon for $39.99. (“Customers who bought related items also bought Wild Planet Spy Gear Night Goggles!”) If Baugh just stopped at being a fraud, and satisfied himself with entertaining lies about giant humans and about how moonlight allowed pre-Flood humans to live almost a thousand years, it might be funny; but he has slipped into the world of attempting to stir up hatred of evolutionary scientists.