My Fun Creationist Weekend, Part Five. Mysteries of the Cretaceous World at the Baugh Museum 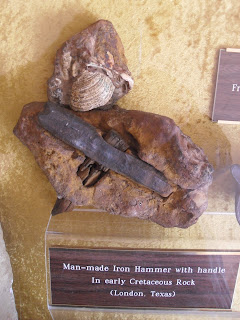 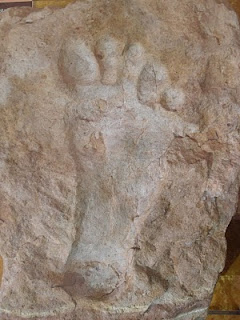 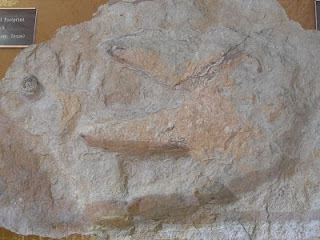 Before I begin this essay, I want to let you know that the National Center for Science Education has posted its Upchucky Award winners for 2011! And now, on with the essay.

I visited Carl Baugh’s Creation Evidences Museum on March 5. After Baugh had finished his presentation (see two previous entries), I looked at the displays I had driven down to Glen Rose, Texas, to see. The bed of the nearby Paluxy River is famous for the trackways of footprints that dinosaurs left in the mud 110 million years ago (according to scientists). But Baugh claims that it was only about 4000 years ago, and that humans had left their footprints in the mud also. In his museum you can see excavated pieces of Paluxy River limestone that have what are supposed to be human footprints in them. One of the stones has what is supposed to be a human footprint overlapping the print of a three-toed predatory dinosaur (see photos). Think about what it would mean if these displays are genuine. It would mean that the entire timeline of evolution, in which dinosaurs became extinct 65 million years ago but the human genus did not evolve until about two million years ago, is wrong. If you glance quickly at these displays, as most people visiting the museum were doing, it seems to be pretty clear that humans and dinosaurs lived at the same time on a young Earth. But if you look closely at the stones, as I did, you begin to notice a few things.

During the Depression, when the dinosaur footprints of the Paluxy River were already famous, some enterprising individuals carved human footprints in the stone and sold them. One might naturally assume that the footprints in Baugh’s museum were also carved. Baugh claims that, while some Paluxy human footprints were fakes, the ones in his museum are genuine. Unfortunately, the only way you can evaluate this claim is by looking at the footprints, as I did. They did not look like fakes to me, at first glance. But, I am not even a geologist, much less an ichnologist (expert in fossil burrows and tracks). How would I know? I was, however, suspicious. The footprints looked good—a little too good, as a matter of fact. Every toe was perfect. I could see no chisel marks, but I concluded that the human prints are fakes, even if Baugh did not carve them himself. For a summary of the human footprint story, click here. In other displays, you can see putative human sandal prints which are supposedly the same age as the dinosaur prints. And even what Baugh claims is a child’s handprint.

One of the footprints is quite large. Baugh has an explanation for this. The footprints were produced by a species of giant humans, which Baugh, no stranger to ego, decided to name after himself (Homo bauanthropus).

There are other items on display at the museum that, according to Baugh, prove that not just humans but technologically advanced humans lived at the same time as dinosaurs. One is the Cretaceous hammer (see photo). It is an iron hammer with a wooden handle that was found, according to the display, embedded in Cretaceous rock further south in Texas. How could a hammer get into a Cretaceous rock? There is actually an easy answer to this question. Somebody in the nineteenth century dropped a hammer into a crack in the Cretaceous deposits, and then erosion filled in the gaps. You can see eroded limestone filling cracks in today, down at the river.

The museum is designed for a quick glance at the displays, rather than careful thought. If you think carefully, however, you quickly realize that the creationist explanation makes no sense. Cretaceous deposits, in Texas and all over the world, are above the Paleozoic, Triassic, and Jurassic deposits, all of them full of fossils. And, in many parts of the world, there are Cenozoic deposits on top of the Cretaceous layers, and they, too, have fossils. That is, if all of the fossil-containing layers were formed during Noah’s Flood, then these Cretaceous layers had to be deposited in the middle of the Flood. Here’s what had to happen. The Flood had been going on long enough to deposit thick layers of sediments full of plants, animals, and technologically advanced people. Then the waters receded, and dinosaurs and humans who had been hiding somewhere came out and walked (not ran) over hundreds of feet of mud without sinking into it. One of the humans lost a hammer. Another lost a finger (see below). Then the Flood came back and buried all of them.

By the way, you don’t want to miss the Cretaceous finger. It looks like a finger from a statue, since there is no evidence of any internal structure such as bone. But Baugh claims it is a real finger, which apparently broke off of a giant who was fleeing the Flood.

The visit to the displays, just like the experience of Baugh’s lecture, creates an alternate psychological reality. Quickly glancing at the displays gives you the impression that humans and dinosaurs lived together on a young Earth. But one of the displays, as I describe in the next entry, proclaims that evolution is the major source of evil in the world in the past and today.