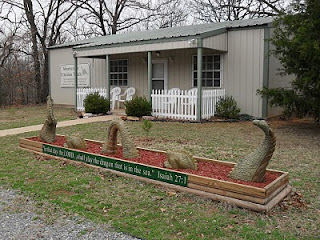 Greetings from the heart of creationist country, rural Oklahoma.

I devoted March 4 and 5, 2011, to learning more about creationism. I have spent a lot of time being angry about the way creationists twist the facts and make them fit into preconceived notions, and the way they use their theories to bolster ultra-conservative positions; and a lot of time carefully explaining why creationism is wrong. But on this weekend, I decided to just have fun observing the phenomenon of creationism and letting it warp my mind just a little, the way one might use recreational marijuana (which I have never done).

It was an ethereal weekend. In part this was because the air was filled with the scent of skunks, who were all out getting run over as they pursued or were pursued by mates. My first stop, on Friday afternoon, was the little creationist museum outside of Bokchito, Oklahoma. It was only a dozen miles away from the town in which I work, but I had never visited it before.

I wasn’t sure what I was getting myself into. The museum was in a post oak forest behind a heavy metal gate. And the name of the museum sounded like a clear condemnation of unbelievers: “Museum of Creation Truth.” And the proprietor likes to breed wolf-dog hybrids. And there was a statue of a sea serpent outside the museum (see photo). Should I have been scared? No, as it turned out. The proprietor, a late-middle-aged man named Bill Gordon, was the friendliest and mildest-speaking man you could meet. He told me that wolf-dog hybrids were just like puppies and they liked to nuzzle up against him.

But Bill’s mind was just like Noah’s Ark: it was packed full of pieces of information that seemed unconnected to one another, sort of like animals packed into the Ark with no ecosystem or phylogenetic arrangement. This museum was his life’s work. He must have spent a lot of money on the displays, which (he is a contractor) he must have built himself. (He does not seem to be making much money on it, unlike the fabulously rich televangelists.) If Bill could cram this much stuff into a museum, then we must reconsider the credibility of Noah’s Ark.

The question that was on my mind was, why? Why a creationist museum in rural Oklahoma? Aren’t most people already creationists? As it turns out, Bill’s answer was, in effect, that most people in rural Oklahoma may be creationists, and Christians, but lazy ones. On Sunday mornings, most of them sleep in or go fishing. Neither one of us mentioned the big news item of the week: the sentencing of a Bokchito woman who murdered her disabled daughter, hid the body parts, and laughed at the judge during her sentencing. Maybe rural Oklahoma isn’t such a religious place after all?

There was a fundamental disconnect between the displays in the museum and its proprietor. The displays (which are, as we will see later, typical of creationist museums) were offensive lies. The main one was the display of Darwin and models of slave handcuffs and shackles. Another display was entitled Nazism and Racial Policy. The clear message is that evolution leads to slavery and other forms of oppression. This message ignores the evolutionary science of altruism, and ignores all of the slaughters and tortures committed in the name of Christianity, from St. Bartholomew’s massacre in France to the massacre of the Pequots by the Pilgrims. Another display proclaims that there are lies in the textbooks—not errors, but lies. And several posters made it quite clear that only very, very, very stupid people accept evolution. The proprietor gave away Jack Chick tracts, including the “Big Daddy” tract that shows a Semitic-looking evolution professor screaming at a very Aryan-looking creationist student. I certainly felt the displays screaming at the local evolution professor, who is me. But Bill avoided these displays and was, as I said, very friendly. Which should I believe—Bill, or his displays? Does he tell other visitors that people like me are evil liars?

I did not have time to think about this, since Bill was leading me quickly around to his favorite displays. I could feel my mind (not for the last time this weekend) softening, under the bombardment of information and the soothing background of recorded hymns.

I mentioned that many of the displays seemed unconnected to one another. They included the following: replicas of items found in Carl Baugh’s museum, about which I will write in a later entry; a photograph of (supposedly) a fossilized giant human found in County Antrim in Ireland (an 1895 hoax, which the “discoverer” took on tour in Ireland and England, and he charged sixpence to view it); a poor-quality photo (supposedly) of a plesiosaur caught off the coast of New Zealand in 1977 (this must have been the sea serpent depicted in the statue outside); a photo of the Lake Champlain monster; a photo (supposedly) of another plesiosaur that washed up at Monterey, California in 1925; photos of purported sauropod petroglyphs; an image of the Oronteus Finaeus map of 1532 that supposedly shows Antarctica as it would appear without an ice cap; photos of the huge stones of the pre-Inca walls in Peru, and the giant stone of Baalbek; and of the Baghdad Battery, which is an urn that, if filled with grape juice, produces a couple of volts of electricity. I was genuinely surprised. I have seen all this information before, but not in creationist literature. I have seen it in those “mysteries from forgotten worlds” books, and from the “chariots of the gods” books by Erich Von Däniken, who claimed that visitors from other planets had revealed technological marvels to ancient people. What did any of this have to do with creationism?

Apparently an important component of creationist theology is that the pre-Flood world was a planetary, biological, and technological marvel. There was, they say (without any Biblical basis), a vapor canopy over the atmosphere, which created high atmospheric pressure and made plants and people grow into giants, and created a worldwide tropical climate. This was the reason that people lived more than nine hundred years back then. It must have been one of those giants that carved what Bill called a giant’s hammer-stone in one of the displays. And apparently it was pre-Flood giants that built the pre-Inca walls and chiseled out the Baalbek stone. And these pre-Flood giants also knew what Antarctica was like before its ice cap formed, and they passed this knowledge down through a series of secret mapmakers, the last of which was Oronteus Finaeus. Postflood humans, they claim, forgot the secret wisdom of the ancients, and went back to making primitive stone tools. And, of course, evolution has to be wrong because there are still plesiosaurs swimming around in the oceans. (The problems with these claims are too numerous to mention. First, the pre-Inca walls are in the Andes, which have fossils in them that creationists believe were produced by the Flood. Second, the Oronteus Finaeus map does not, in fact, show an accurate Antarctica; in particular, it does not show the peninsula.)

Bill got nearly everything in his museum—mostly replicas and copies of photographs—from two men who are among the most unreliable sources of information on the planet, aside perhaps from Erich Von Däniken. One is Carl Baugh—whom we will meet in a subsequent blog entry—and the other is Kent Hovind, who is currently serving time for tax evasion. It became apparent to me that Bill is hopelessly credulous of certain infamous creationists. He seems to believe them as much as if they were Jesus, although he would deny this. If Kent Hovind or Carl Baugh (whom I was planning to check out the very next day) says it, Bill just drinks it in. Bill’s parting gift to me was a Kent Hovind DVD. It is a sad thing to see a man’s mind wasted on such credulity.

One photograph particularly caught my attention, and I will write about it in the next entry.