My Fun Creationist Weekend, Part Three. Into the Land of the Dinosaur Preacher 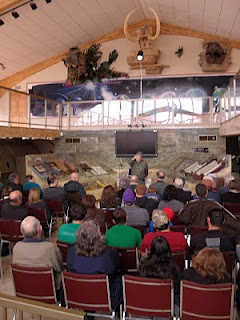 On March 5 (which was Lynn Margulis’s seventy-third birthday), I continued my fun weekend of learning about creationism (see previous two entries). On this morning, I visited Carl Baugh’s Creation Evidences Museum in Glen Rose, Texas. This museum, as some of you may know, is the one that purports to prove that humans and dinosaurs lived at the same time. The museum is on the banks of the Paluxy River, which is famous because the bed of the river contains entire trackways of dinosaur footprints. And, Baugh claims, human footprints as well.

I was in for a real treat. It was not just creationism that I saw. It was an entire world of psychological illusion.

I arrived just after 11:00, just in time to hear Baugh’s monthly sermon. I parked my car in the gravel lot, walked past a big yellow school bus (wondering about the legality of using a public vehicle to take kids to this place), and slipped in through the front door. It was standing room only; all the seats were occupied by the approximately 100 people who had come early to hear Baugh. A man was singing hymns to a music track.

Then Carl Baugh came to the microphone (see photo). A late middle-aged man, he bears an uncomfortable resemblance to the late Garner Ted Armstrong. His mellifluous baritone voice announced that all of the money from the collection that the ushers were taking would go to benefit the singer. And then he began his sermon. The first half hour was not about creation-science at all. It was about old editions of the Bible. Baugh’s museum had recently purchased a Bible, using funds provided miraculously by a donor, which had been edited by Desiderius Erasmus and published just prior to the King James Bible of 1611. The King James Bible is the one that many fundamentalists revere, even more than original documents. Some churches, like the Baptist church just outside the town where I work, actually proclaim “KJV 1611” on their sign. Why? Because, Baugh said, the King James Bible is the one that has saved more souls than any other version. I suppose this means that nobody actually knew what the actual words of God were until 1611, perhaps (I may guess) even the people who heard Jesus himself. This Bible that Baugh had purchased contained editorial revision marks. This Bible, therefore, represented the final step before the publication of the King James Version. Baugh told the audience that one of the world’s foremost experts on seventeenth-century Bibles, at Oxford, was going to verify the authenticity of the book.

Now it was time to build some excitement in the crowd. Baugh’s cell phone rang. I thought it was odd that an experienced speaker would forget to turn off his cell phone, and then would pointedly refuse to turn it off after it had interrupted his presentation. He announced he would ignore the call. The phone rang again. He said he would answer it because it just might be the manuscript expert calling. Guess what—it was! The world expert on seventeenth-century Bibles just happened to be starting his work at what would have been 5:00 pm on a Saturday in England. Well, guess what, said Carl. There is a whole audience here who wants to know what you are finding out about the manuscript! It did not take long for me to figure out that the phone call must have been from one of Baugh’s associates, perhaps standing outside or in an office. It was a smooth attempt to manipulate the audience. This was just in time for Baugh to announce that he was looking for a new donor to buy another old Bible. A local informant tells me that Baugh has conducted bids before, using a cell phone with a fake bidder on the other end.

Baugh then showed another old Bible. It was one of the original King James Bibles, only the printer had changed just a single word, and for this crime he was imprisoned by order of King James. Almost all copies of this Bible had been destroyed, but Baugh had gotten hold of one. What was the word that the printer had substituted? (While driving down into Texas, I had been listening to NPR, and there was a report that a new edition of the Bible had been published that changed the word “booty” to “plunder,” but I doubted that this was what Baugh had in mind.) The printer, Baugh said, had changed “Jesus” to “Judas” in just one verse of the New Testament. After the presentation, people lined up to see the “Judas Bible”, but only if they washed their hands and made sure they did not drop any dandruff on it.

The reason I have gone into this part of Baugh’s presentation in some detail is to show you that the Baugh’s entire purpose is to cultivate followers and donors, rather than to convince anyone of the truth of his creationist evidences. What I witnessed here was not just an atmosphere of psychological manipulation, but acts of psychological manipulation. And it was working. Whenever Baugh asked if the audience was agreeing with him, there were mesmerized nods, rather than affirmations. The audience was not enthusiastically engaged, but hypnotized. I could feel it myself—I could feel my own brain becoming soft. It was at least fifteen minutes before I realized what was going on.

When Baugh got into his “scientific” presentation, the astonishing content of which I will present in the next entry, it was clear that he was manipulating the audience with the aura of science, rather than trying to present evidence to them. He made some incredible claims, but verified them by saying that they had been published in a book that had sold out, and the last one had been bought for a hundred dollars by a professor, who just happened to be in the back of the room. (By this time I was wondering if any such thing had happened, but I have no proof that it had not. I cannot locate the book on Amazon.) Anything in a book that sells for a hundred dollars must be correct, I suppose.
Baugh rushed through a PowerPoint of “evidences”, skipping the details, claiming that the scientific terms like “nucleosynthesis” were really big and complex and hard to pronounce, then ending with the triumphant claim that he had found scientific evidence for God’s Truth. Wow, all these scientific terms and even a few Greek symbols—that settles it. How could he be wrong, when he could almost pronounce the word nucleosynthesis? And how could you doubt him? He spoke so smoothly, and slipped in jokes. He had time for jokes and homey stories, but not for the evidence, which flashed by on the screen. (There needs to be a term for this. It is not quite like Stephen Colbert’s “truthiness,” or Charles Seife’s statistical “proofiness.” It is the illusion of proof that comes from flashing through a series of scientific-looking slides. If any of you know a good term to describe this, feel free to post a comment.)

In the next entry, you will find out some of the scientific claims that Baugh made that morning—claims without evidence, and even without Biblical basis. It is all part of the mind-numbing psychological effect that he deliberately cultivates in his museum.