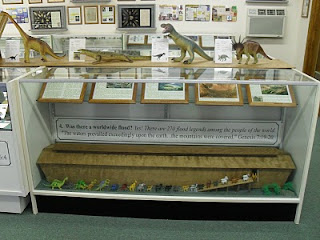 In my previous entry I wrote about my visit to Mr. Bill Gordon’s Museum of Creation Truth outside of Bokchito, Oklahoma, which was crammed full of replicas of items and copies of photographs that were mostly about a mythical pre-Flood world rather than about creationism.

There was one photograph on display that, were it really what Bill claimed it to be, would convince all of us of creationism. If it were real, we should all go to Turkey as fast as we can and check out the most important discovery in the recent history of humankind. I refer to Noah’s Ark. Yes, the real Noah’s Ark, in the Ararat Mountains of Turkey, according to its promoters, such as Ron Wyatt, an amateur archaeologist.

According to Wyatt and other promoters, the Ark was entombed within rock on the slopes of Mt. Ararat, where it came to rest at the end of the Flood. And there it lay, hidden from the eyes of humankind, until an earthquake revealed it in 1948, just in time for the Last Days before the Return of Jesus Christ. And there it is, for anyone who wants to see it. How do you get there? Well, conveniently enough, the government of Turkey has made it into a national park.

The putative “ark” is a geological formation that looks like a long pointed boat. Wyatt and others claim that this formation is the right size to be the real ark and that its sides contain petrified wood, the actual wood used by Noah. The promoters also claim to have found the anchor-stones that Noah used (which are, as you might have guessed, not mentioned in the Bible). The promoters make a long list of other claims about it.

It turns out that these claims are all false. For example, the sides of the “ark” are hardened mud, with fossils in them. I have no intention of repeating all of the evidence. You can read it from the mainstream creationist literature—this “ark” was even too much for them to believe.

And it is not simply a mistake; Ron Wyatt is either a fraud or seriously deluded. According to creationist writer Andrew Snelling in the hyperlink above, Wyatt also claims to have found such things as the following: the true site of the crucifixion of Jesus; the Ark of the Covenant; the true Mount Sinai (with a plaque announcing it as such); the true site of the Israelites’ Red Sea crossing, also with a marker ‘built by King Solomon’ as a memorial; chariot wheels from Pharaoh’s drowned army; the actual rock Moses struck to release water; Noah’s grave, complete with the skin that held the wine that made him get drunk and naked, as recorded in Genesis 9:20 (okay, I just made that last part up); Noah’s house, complete with the biggest flush toilet in the ancient world (okay, I just made that part up too); Mrs. Noah’s grave (containing a fortune of gold and jewelry—I did not make that part up); and Moses’ stone tablets containing the Ten Commandments, held together with golden hinges. Hey, why not throw in the Holy Grail and the Holy Prepuce as well? Unfortunately, Ron Wyatt was a little too late to be the discoverer of the Holy Prepuce. During the Middle Ages, there were up to eighteen cities that claimed to have the true foreskin of Jesus Christ (I am not making this up). The Italian city of Calcata claimed to have the real one as recently as 1983. But then some thieves stole it while it was being paraded around the city.

The fact that the government of Turkey made the rock that looks like a boat into a national park means that the Turkish government knows how to get western tourists to visit and spend money. Sounds like a fun place to visit. But I don’t have enough money to go to Turkey. Instead I settled for Carl Baugh’s museum in Glen Rose, Texas, which I visited the next day, and will describe in upcoming blog entries.