Evolution in Oklahoma, a Road Trip: A Dramatic Geological Past, part two.


I continue now to describe some of the geological things that we will see on the Evolution Road Trip May 30 to June 2, 2013. See here for more information.

Back in Pennsylvanian days, about 300 million years ago, sediments had been building up and turning into rock in what is now Oklahoma for over a hundred million years. Then something dramatic happened. Part of the land rose, part of it fell. Cambrian and Ordovician rocks now looked down into deep valleys. Big rocks eroded down into those valleys. Soon the valleys were filled with what was to become conglomerate rock. And such conglomerate! See the photo. The component rocks are big, and sharp-angled, both of which facts mean that the rocks did not get carried very far before being mashed together. At the scenic overlook north of Exit 47 on Interstate 35, you can see contorted layers of Ordovician limestone right next to Pennsylvanian conglomerate. Two hundred million years ago, this is where the cliff was. 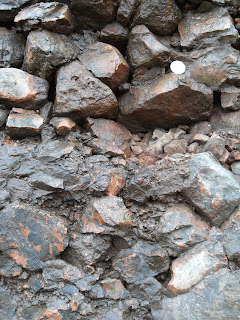 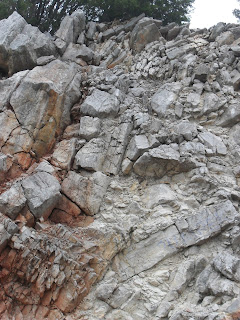 Today, young couples spray-paint proclamations of love on the exposed strata. But do they have any idea what “4ever” means against the backdrop of 500 million years of geological history sometimes hidden, and sometimes exposed, in central Oklahoma? 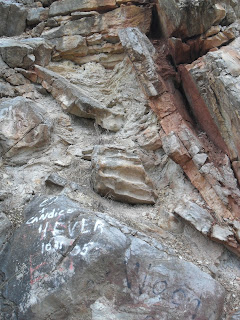 Even in the gentlest rolling hillsides of south central Oklahoma, there are surprises. There is a very thin layer of limestone crammed with fossils (see photo). This layer is a little harder than the others and creates a shelf that I have driven past many times and never noticed. Thanks, Gordon, for pointing this and all of the preceding things out to me. 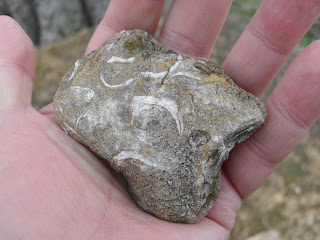 I have learned so much since my old creationist days. And I continue to learn. Most of these geological sites are near Sulphur, Oklahoma, which has a whole bunch of youth Bible camps. I am sure that one of these camps was where the Church of Christ cult of which I was a member had its summer youth meetings at which young men and women could meet and marry within the cult. (We were the branch of the C of C that rejected not only instrumental music and Sunday school but even insisted on using a single cup rather than individual cups during communion.) I never went to one. But here I am, perhaps driving right past them, in search of evidence about the evolutionary past that my erstwhile cult so vigorously denied.