Evolution in Oklahoma, a Road Trip: Piles and Piles of Fossils


Don’t forget the Oklahoma Evolution Road Trip, May 30-June 2. We have enough registrants that the trip is unlikely to be canceled, but there is still room! Tentative deadline is May 3, but we can accept a few more applications after that date. We just need to plan ahead about how many rooms and vehicles, and how much food, to provide. Read more about it here as well as in blog entries posted earlier (below).

One of the places we will be visiting, in our search for fossils, is Fort Washita, near Durant, Oklahoma. It is a site of great historical interest. It was built by the U.S. Army to defend the Chickasaw tribe against western tribes, whose land had been taken in order to resettle the Chickasaws from their ancestral homeland that the U.S. had confiscated. Then, in the Civil War, Ft. Washita became a Confederate fort. History and politics back then was a big mess, just as it is today, only there was a war going on right here on our American soil.

Ft. Washita was located on a hill because it allowed visibility across the prairie in order to observe the approach of understandably hostile tribes, or (later) Union soldiers. Today, most of the surrounding landscape is forested, but when the fort was built it was mostly prairie, with some scattered post oaks and bois-d’arcs. It is possible that some of the very large post oaks and bois-d’arcs that are today on fort property were alive when the fort was active. Each bois-d’arc tree appears to be several trees that have grown together. This probably occurred because the animals that originally dispersed the large fruits (e.g. mammoths and gomphotheres) have been extinct for thousands of years. The mammoths would have spread the seeds out in their dung, but since the mammoths were extinct the fruits simply landed on the ground and all the seeds began to grow in a clump. 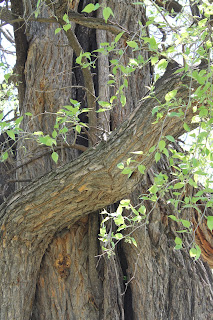 But the main topic of interest is something that very few visitors notice when they come to the fort. I am embarrassed to admit that I did not take notice of it until recently. Most of the original buildings are made from rocks quarried from an extremely fossiliferous layer. Some of the stones appear to consist almost entirely of mollusk fossils. We’ve all seen fossils, but perhaps nothing quite like this. 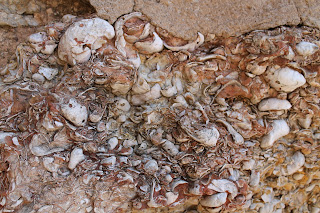 So join us for the Road Trip if you can!