Evolution in Oklahoma, a Road Trip: A Dramatic Geological Past, part one.

Breaking news: European Space Agency scientists just announced that the universe is older than previously thought: it is 6,001 years old, not 6,000. (Actually the official estimate was raised from 13.7 billion to 13.8 billion years.)

In a previous entry, I announced an Evolution Road Trip for May 30 to June 2, 2013. See here for more information. I will now tell you some reasons why I am excited about this trip. First, the geological evidence of the evolutionary past.

In the Arbuckle mountains of central Oklahoma, the sedimentary layers have been lifted up and eroded, with the result that the oldest deposits are highest in the mountains. Creationists love to point out this reverse order as evidence against evolution. But you can actually see the angles by which the layers have been uplifted.

Another thing you can see in the deposits is the difference between near-shore and deep-water (near the edge of the continental shelf) deposits. In shallow water, there is plenty of sunlight, a strong food chain, and lots of fossils; in deep water, there are fewer fossils. In addition, coarser sediments accumulate in shallow water, while finer sediments disperse into deeper water. No Flood of Noah could explain why most of the fossils are found in coarser sediments. There is a roadcut that we will visit on this trip that displays this evidence very nicely. See the photo for the Ordovician fossils found at that site. Look closely and you can see disarticulated crinoid segments, branches of bryozoans, mollusks, and even pieces of sand dollars. 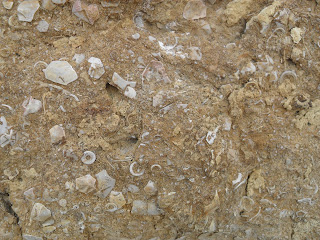 At the top of the Arbuckles, you can see stromatolites. They look like lumpy rocks. But if you look closely at the photos you can see some of the splotches that used to be cyanobacterial mats; and you can see the layers inside the lumps that resemble those found in modern stromatolites. 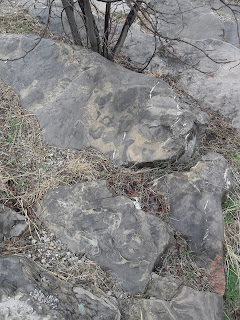 In the next entry, I will tell some more exciting geological stories about Oklahoma.

Note: There was an ecotour in Big Bend in March that cost $2885 for five days not counting travel, plus $450 for single accommodations. Considering this, the Oklahoma Evolution Road Trip is quite a bargain. We have a tentative registration deadline of May 3.