Oklahoma-Texas Evolution Road Trip, Part Three. Dinosaurs and the Humans Who Are Still Looking for Them


On June 1, the participants in the Road Trip hopped (or, rather, packed themselves) into the van and I drove them down into the heart of Texas, to the town of Glen Rose, just southwest of Ft. Worth. We arrived at the Creation Evidences Museum in time for the monthly sermon of an infamous creationist named Carl Baugh. Baugh is a smooth talker, and cultivates a friendly, calm, and reasonable image. The image of humility may conceal great pride, however: he seems very proud that lots of scholars, including many young-earth creationists, know him and reject his beliefs. Every month you can expect to hear something different and astonishing from Baugh that you will hear nowhere else, even from the Institute for Creation Research or Ken Ham. Every month the world of Baugh and his followers retreats a little further from reality. I could hardly wait to see what this month had in store. The other time I visited, Baugh said that there had been no lava flows on the moon until after the Flood, and that pre-Flood moonlight promoted longevity before the Flood (see here). What would he say this time? (Photo courtesy of Mary K. Johnston.) 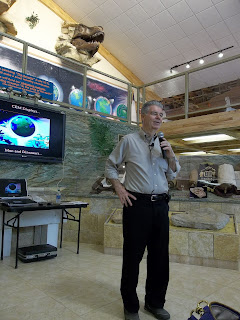 The museum included a replica of what Baugh thought Noah’s Ark might look like, and many other displays, including a model of an Acrocanthosaurus head. Acrocanthosaurs seem to chase Mary K. Johnston around; but relax, Mary, can’t you see that this acrocanthosaur eats plants? You can see them hanging from its mouth. That’s what the razor-sharp teeth are for! 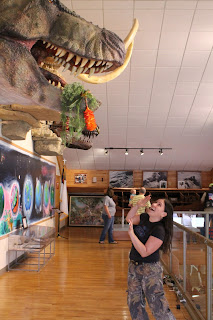 Most of Baugh's sermon was devoted to defending the idea that humans and dinosaurs lived together about 4,000 years ago. This idea is no different than what you will find in Ken Ham’s creationist museum in Kentucky. And Baugh defended at length the idea that human footprints and dinosaur footprints occur in the same layer of Cretaceous rock exposed in the bed of the nearby Paluxy River. Again, this is what he has been saying for years. And he admitted that this belief has undergone some challenges. For example, what he had long considered to be a trackway of human footprints turned out to be dinosaur footprints. He admitted that Glen Kuban, who has studied the Paluxy River dinosaur tracks for decades, was right about that. Even John Morris, who leads the Institute for Creation Research in the footprints, as it were, of his father Henry, has withdrawn his support from this assertion. So is this the end for Carl Baugh?

Not on your life. Baugh insisted that giant humans had hopped along and put their footprints in the middle of pre-existing dinosaur footprints, so of course they looked like dinosaur footprints. These were of course giant humans, with strides as great as those of large dinosaurs. They grew big because the intense atmospheric pressure of the pre-Flood Earth buoyed them up. Of course, he could not prove this, and hesitated to say that he could.

In the end, Baugh’s entire belief system rested primarily on just one piece of data: a supposed human footprint overlapping a dinosaur footprint. The slab of rock with these structures can be seen right in his museum. Some of our group took a look at the “human footprint” after the sermon. The dinosaur print was real; there are still hundreds of them in the bed of the Paluxy River. And there are compression lines below them, showing that the dinosaur footprints have not been carved. But the human print looks both too good to be real and artificially cartoonish. Judge for yourself. 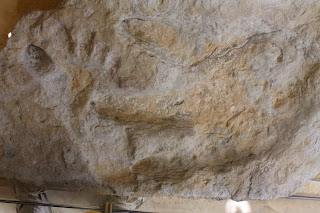 I was still waiting for the surprise. Toward the end of the sermon, I got it—something I had not heard Baugh say before. (Not that I am a regular visitor to his sermons.) Baugh said that dinosaurs were still alive. No, you cladists, he didn’t mean birds. He meant the big ones. The likes of Paluxysaurus and Acrocanthosaurus. Where? In some African jungle, I think; he wasn’t clear about this. I’ll have to look it up in the Edgar Rice Burroughs book. Maybe in a parallel time dimension at the other end of a cosmic wormhole. They are waiting to emerge when the Millennium starts. His evidence? He said that the book of Job, written after the Flood, refers to dinosaurs (leviathans and behemoths) in the present tense. After all, medieval European and Chinese tales told of dragons. Are you calling St. George a liar? That settles it.

In a later discussion, our group considered the cult characteristics of Baugh’s followers. He seemed to have a mental list of things to do to make himself credible. He knows most of the audience members by name, therefore Baugh has formed a community of believers. He has also told them that they are a little embattled enclave surrounded by unbelievers, some of them even fellow creationists. While Baugh said that people could disagree with him and still be good people, some audience members muttered that anyone who disagreed with Baugh could not be a good person. And they seemed to be mesmerized by him. I did not notice this at the time, but when I reviewed the brief video I took of Baugh’s sermon (which is out of focus, sorry), Baugh said something like, “Have you ever seen a human footprint stepped on by a dinosaur…” A big scary man in the front row nodded in the affirmative. Wow. I would not want to encounter that big scary man who thought I was a bad person and who was convinced that he had seen dinosaurs. This is the same guy who said that disagreeing with Baugh was like Pharaoh spurning Moses even after the Ten Plagues. It’s not quite as cultlike as Jonestown, but it has all the defining characters of a cult.

Because it is a little cult, I doubt that their attempts at world outreach will amount to much, especially when the 76-year-old Baugh, whose charisma holds the group together, “graduates” to Heaven someday. Of course, if he gets inside the hyperbaric chamber (their next project, though they cannot legally do human experimentation) he might outlive Methuselah. (The hyperbaric chamber is meant to mimic the high air pressure believed to have existed before The Flood.)

Baugh might have thought that everyone who came to hear him, including trip participant Mary K. Johnston, was there to admire him. We did not tell him any differently. (Photo courtesy of Mary K. Johnston.) 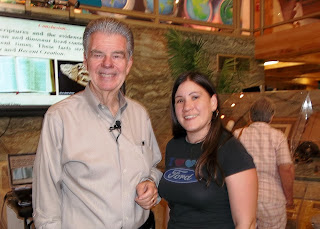 We met outside the museum to see Marlyn Clark’s Flood Tank. About 1980, an engineering professor, M. E. Clark, at the University of Illinois, constructed a tank that could pitch and yaw around. If you put water, gravel, sand, and silt into it, they sort into different layers. Clark considered this to be experimental confirmation that The Flood could produce all the fossil layers. I do not know if he threw the family cat into the tank to see if it would fossilize. I don’t think Thelma and Becky would have let him. You see, I knew him and his family a little bit, mostly because he was one of the people at our church who tried to silence me from teaching a class about evolution, which I taught at the request of the church leadership. He was pretty grim but had a good side. He invented some component that is now used in artificial hearts. As he neared the end of his life, he donated his tank to Baugh’s museum. It sits out on the grass, unlabeled; very few people know what it is. We took a group picture in front of it. 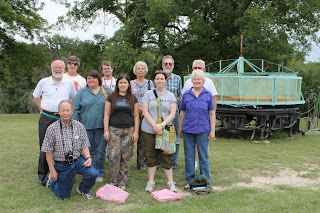 I will skip ahead to a final observation. Before we left the Paluxy vicinity and headed into Glen Rose for some barbecue, we stopped at a little rock house where the proprietor sold fossils: ammonite casts, which were probably genuine; trilobites, which looked too good to be real; fragments of crinoid stalks from Morocco, which is famous for fake fossils (as described by Gould in “The Lying Stones of Marrakech”); coprolites, one of which I bought and do not care if it is real; and other things. This was the very rock house in which George Adams had carved fake human footprints in slabs with dinosaur prints in the 1930s. While we were there, who should pop in but Baugh’s understudy Aaron Judkins, whom Baugh had introduced before his sermon. The proprietor gave Aaron a very nicely made clay pitcher. Let me predict what might happen. Judkins might imbed the pitcher in limestone matrix and put it in Baugh’s museum, claiming that it was used by one of the pre-Flood humans. I may be wrong, but I put the world on notice: in the future, if and when I visit this museum, I am going to watch for that pitcher. I asked Judkins if the pitcher was “from around here.” He said it was from pre-Columbian Mexico. For the record, that pitcher is not pre-Flood; it was obtained from the rock shop, free of any matrix, on June 1, 2013.

After we entered Dinosaur Valley State Park and ate our lunches and discussed what we had seen, we went looking for dinosaur tracks (next entry).

Yesterday’s blog entry got a comment, from Prom Limo Service saying what an informative blog it was. It appears that parasites live in the blogosphere just as in the biosphere.