My Fun Evolution Trip Part Three: The Great Unconformity of the Black Hills

One of the greatest new insights into the history of the Earth was when James Hutton realized that the Earth had to be very old and that geological deposits were recycled over and over again—an idea called uniformitarianism. Hutton was not the first person to think of this but he was the first to pursue the idea in an organized fashion. His complex thoughts were later summarized by John Playfair and extended by Charles Lyell. As the modern paleontologist Michael Benton has explained, uniformitarianism can mean lots of things, some of which (such as uniformity of process) is still accepted by modern scientists, but others of which (such as uniformity of rate) are not. The former means that you can understand the past by studying the processes of the present, rather than invoking random miracles. The latter means that those processes have operated as slowly in the past as they are at present, which is clearly not the case.

Hutton, loving near Edinburgh, Scotland, in the late eighteenth century, looked at the local geological deposits and thought about them. At Siccar Point is an unconformity with nearly vertical Silurian sedimentary layers on the bottom and gently sloping Devonian and Carboniferous sedimentary layers on top, with millions of years of missing history in between. He realized that such sedimentary deposits could not have formed all at once during a global flood. And here’s why.

When the older, lower sedimentary layers formed, they had to be horizontal, due to the law of gravity. But these layers had been turned on their sides. If they were still mud when turned sideways, they would have gone PHHHHHHT! and squished into a big pile. The fact that they retained their layers meant that they had become rock before being turned on their sides. Then other sedimentary layers formed on top of them. This simply could not have happened during a single global Flood of Noah. Of course, creationists then as now could simply invoke miracles. They could say that God squished the lower layers into rock and turned them on their sides in the middle of the Flood. Does the Bible say this? No, they just make it up.

You can go to Scotland and see it for yourself. Sounds to me like a great excuse to go to Scotland. But there are other formations called The Great Unconformity, including the one John Wesley Powell discovered in the Grand Canyon. An unconformity is a geological formation in which a large chunk of time is missing. But there is a really good one (which didn’t make it into the Wikipedia entry) in the Black Hills of South Dakota, which has Precambrian sediments raised at a 70 degree angle on the bottom, and horizontal Cambrian strata on top, with almost two billion years of missing strata.

It is difficult to get directions to find it. So remember this. Find Nemo Road west of Rapid City. There are several ways to get there. Just as soon as this road, as you go west, crosses over the line from Pennington County into Meade County, you will see a bridge over Boxelder Creek. Immediately to your left is the Great Unconformity. 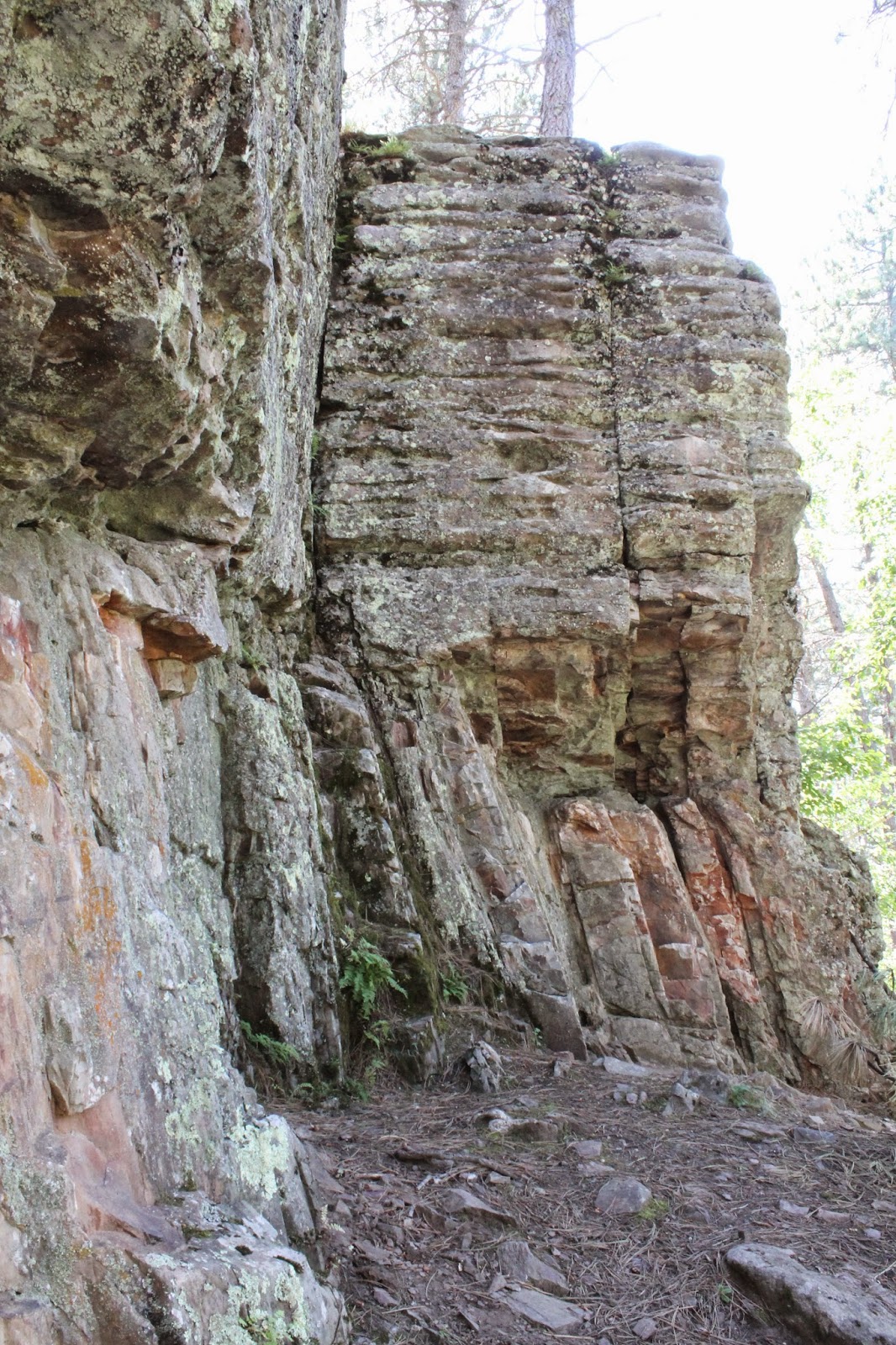 This is what it looks like from Nemo Road: 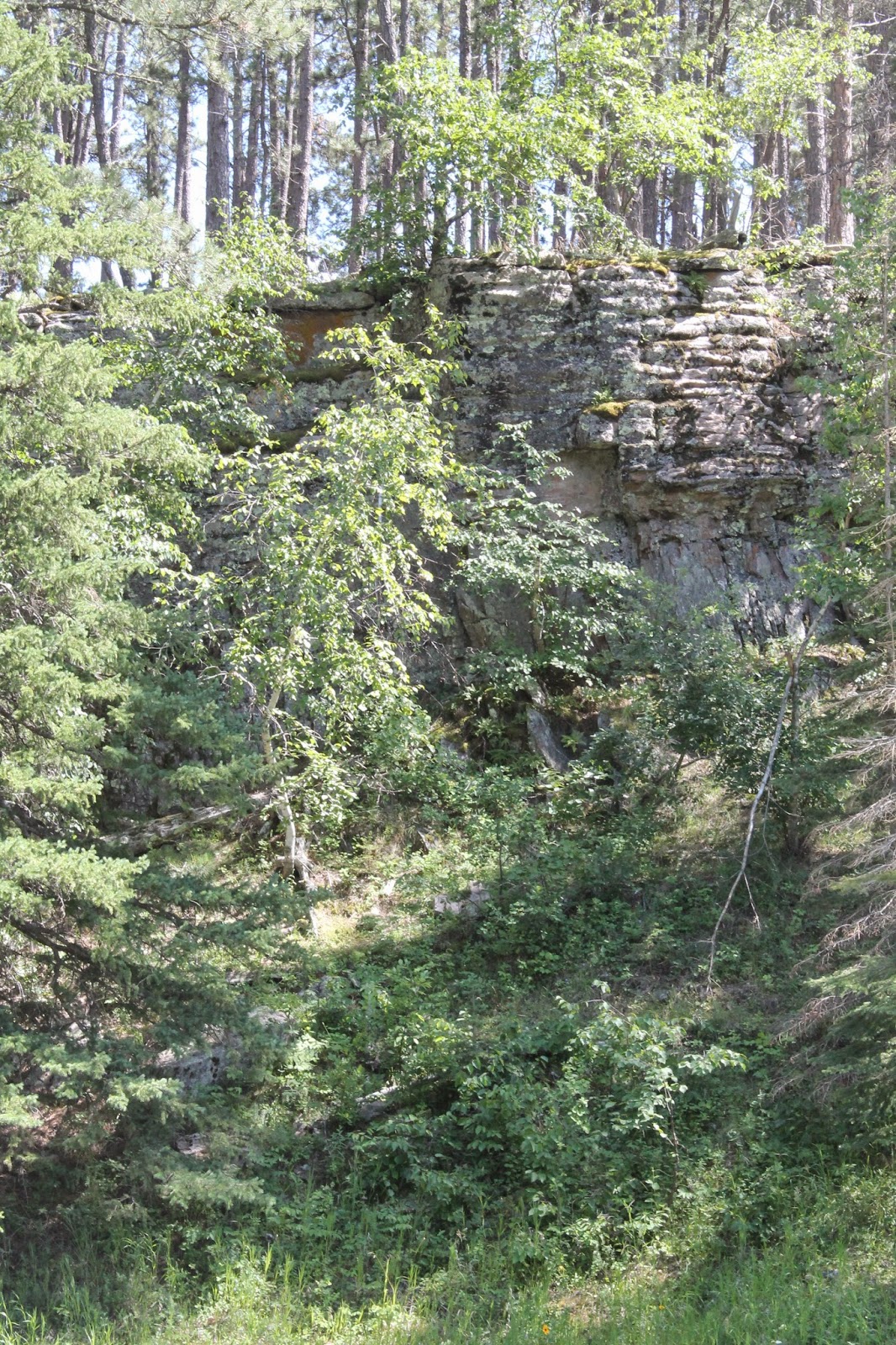 Even though it is in Black Hills National Forest, there are private landholdings all around, so you need to stay away from people’s yards. You will probably find, as I did, a path worn through the grass by generations of geology students from the South Dakota School of Mines and Wheaton College Science Station. There are other places to see the unconformity, but this is the only place where you can walk right up to it and put your finger on almost two billion years of missing history. 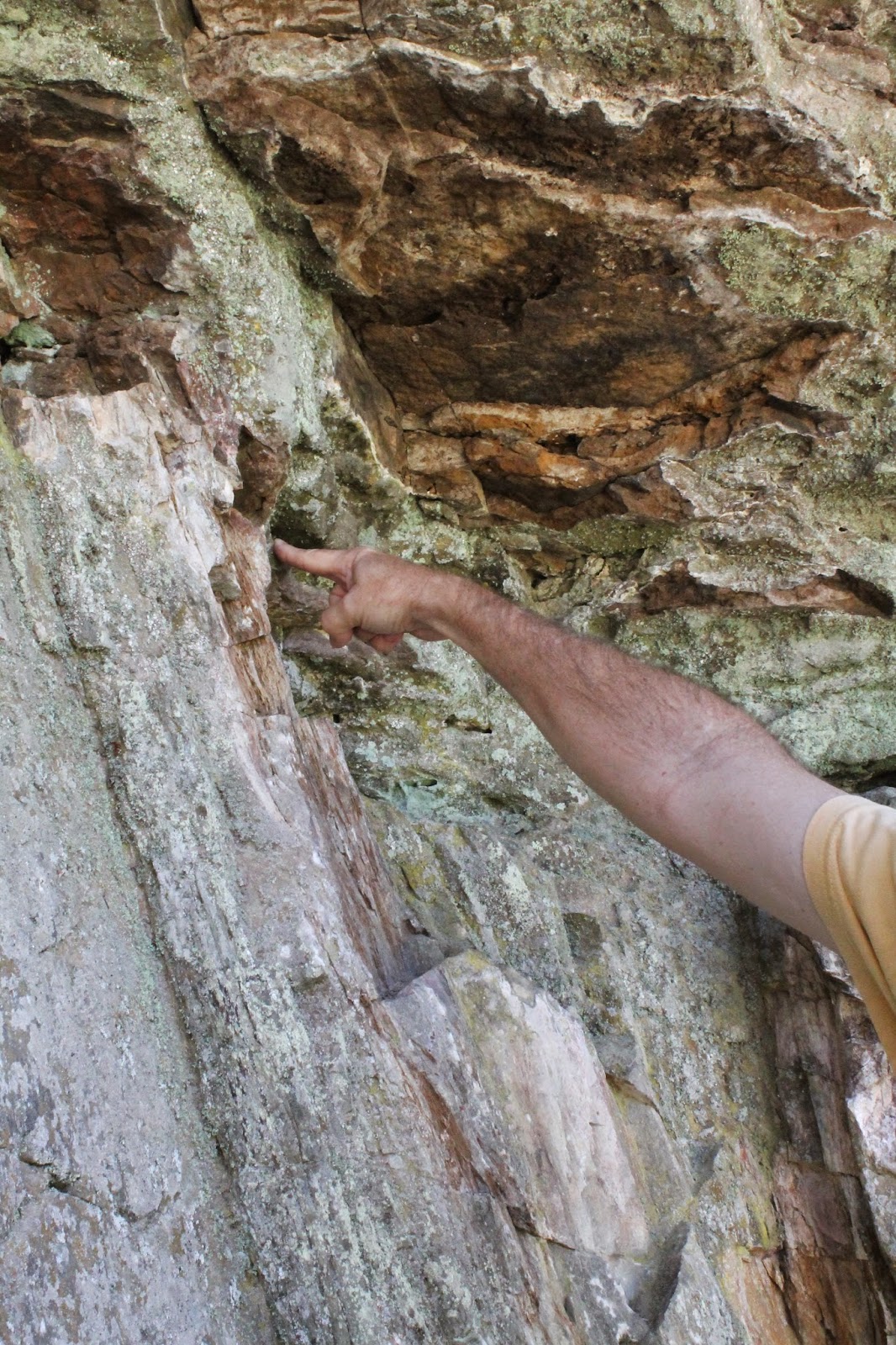 How could this unconformity have formed all at once during a flood? But maybe creationists have another explanation. Maybe the lower Precambrian layers were pre-Flood, which would have given ample time (almost two thousand years) to form the sediments into rock and then push them to their current 70 degree angle, and then the upper sediments were of Flood origin. This approach is not much help, however, because two thousand years is not enough time to have turned all the Precambrian sediments into rock and pushed them over, unless God did a miracle which the Bible conveniently does not mention.

So when you are in the Black Hills, forget about Deadwood and even Mt. Rushmore. The only really interesting thing, to me, about Mt. Rushmore, is the remnant populations of the rare fern Asplenium septentrionale that someone showed me in 1993 but which have apparently died. Go see the Great Unconformity, a hidden treasure—there is not even a road sign to mark the Nemo Road location.
Posted by Honest Ab at 8:46 AM