What Is a Forest Worth? More Requiem for Nature

Whenever I write about somebody else’s book, I fear that I might have represented it. I sent the link to the previous essay to John Terborgh, author of Requiem for Nature. He responded that my summary was essentially correct. He added, reprinted with his permission:

“The world has moved on in a way that is predictable but not conducive to protecting nature. I say predictable, because the fundamental economic goal of nearly every country on the planet is to maximize economic growth. With this as the background to nearly all important policy decisions, nature doesn't have a chance. It is the empty chair at the conference table.

Perhaps the most memorable lecture I heard in college was one delivered by my Freshman biology professor in which he laid out in vivid terms the consequences of unchecked population growth. That, my friend, was in 1955. Here we are, 64 years down the road, and putting the brakes on the human population is still a topic that can't be mentioned in polite company - much less in open political debate.”

In the first photo, I am leaning against a rainforest tree (I have no idea which species, there are so many!) in 1989; in the second, I saw an area in which the rainforest had been hacked away, exposing soil to erosion. 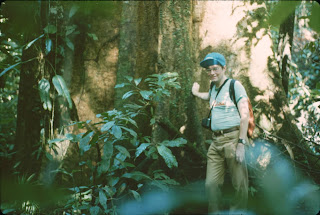 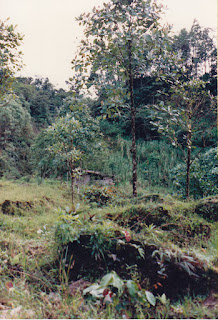 Meanwhile, all I can do is to teach and to write. I continue to do these things even if they are likely to have little effect on the course of the future. As John added at the end of his message, “Carry on with your efforts to prod students into thinking out of the box. It's the only way we'll get out of this mess.”