Listen Up, Chauvanist Humans! A Message from Your Local Cottonwood Tree

I am a female cottonwood tree named Fluff. I live in Tulsa, Oklahoma, according to your human maps. I object strongly to being called “it,” especially by humans who think they can cut me down. I am she.

Nearby is my mate, a male cottonwood tree. I did not choose him as my mate, but the seeds from which we grew happened to land very near to one another. He is somewhat arrogant, proud of his bright pink catkins, and of his sexual prowess: he can produce a hundred pollen grains for every one of my seeds.

Here is a photo of one of my autumn leaves. Is it not beautiful? 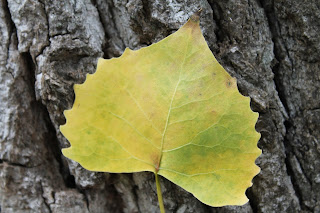 I cannot speak, so I will let botanist Stan Rice speak on my behalf. He will tell you, “Look at her beautiful green catkins” in the spring and “Listen to the susurrus of her glistening leaves” in the summer. He adores me for who I am, not for what I am. About ten percent of plant species are like me: some of us are female, and some are male. We are, as Stan tells me, dioecious. My species (which Stan calls Populus deltoides) is far from being the only dioecious species even in Oklahoma. Several species of willows; mulberries; bois-d’arc trees; holly bushes; to name a few, are also dioecious. We all deserve to be called she and he. Then there are the monoecious plants, which have separate male and female reproductive organs, but in different places on the same plant. Oak trees; walnut trees; pecan trees; pine trees—all of them are monoecious. But even more common are the species that have both male and female structures inside the same reproductive organ, usually a flower. Everyone sees the stamens of a freshly opened flower, but few notice the pistil which contains the future seeds. Even these plants, however, are gendered beings.

[Editor’s note: spell-check programs are extremely human-chauvanistic. It is difficult to get Word to not change deltoides to deltoids, as if any self-respecting organism would have arms with deltoid muscles into which covid vaccinations can be jabbed.]

A letter written recently by animal rights advocates calls for the use of gendered personal pronouns to describe animals. The lead author is Jane Goodall, who has for decades kept up a reasonable effort to get the respect of personal, rather than impersonal, pronouns used for chimpanzees. The evidence that chimps are as individual and sentient as humans is overwhelming. The use of he and she for chimps is nearly universal among thoughtful writers today.

But this letter has called for personal pronouns to be used for “non-human animals,” without precisely specifying what these are. Personal pronouns clearly apply to chimps, as well as gorillas, seals, whales, etc. Most people use he and she for their pets. But what about mice? If you can’t tell whether a mouse is male or female, should you use “they”? “The mouse left their droppings on the floor” may be awkward, but maybe it is something that all of you humans need to learn to do. What about an earthworm, which is both fully male and fully female at the same time? “I picked up the earthworm from the sidewalk and, to save his/her life, tossed him/her onto the grass.”

The problem goes far beyond pronouns. Humans arrogantly assume they can assign personal names to their pets. Stan tells me he once, as a child, had a ghost catfish that he named Sam. It died because Stan did not know he was not supposed to use tapwater in a fishbowl. I cannot imagine a fish would object to being named Sam, but then again, how would I know? How can a cottonwood empathize with a fish? Although I am more likely to do so than What’s-His-Name who thinks he is my mate.

People often name their cats something like Snookums. How degrading! At least names like Shakespurr, Purrscilla, or Walter Cronkat are funny, but the cats did not choose these names. Humans do not choose their names either, at birth, but can change them later if they wish. Animals do not have this option.

For plants, the problem is unthinkably worse. Even the humans who care the most about us, like Stan, do not give us personal names very often. Stan has a database of trees in Durant, Oklahoma, and he has not given one of them a personal name. He knows many of them personally. He knows exactly where Qs26 (for Quercus stellata 26) lives, and even says hi to it when he walks by, but never by name. He certainly has not asked him/her the name he/she prefers.

The problem gets even worse when we descend into the microbe realm. Even the use of the verb “descend” is condescending. Microbes are as fully evolved, adapted to their ways of life, as are cottonwoods or even humans. One human did try to empathize with microbes. As documented in a book by David Ketterer, Mark Twain wrote a manuscript (not well known, nor well written) called Three Thousand Years among the Microbes. He was a human who shrank down to microbe size and lived on their time scale. He stayed for about three human weeks, which was about three thousand microbe years. He got to know them by their microbe names as individuals. He gave them human names, but only when they asked for them. One of them told him that she wanted to be called Catherine of Aragon. There were trillions of microbes on one planet—the planet being a single human being. They all had different personalities. Not only that, but each microbe itself had billions of microbes on and inside of him/her, and they were as dismissive of and unmerciful toward their microbes as humans are of theirs. The microbes thought Twain was crazy when he told them there were billions of humans, each with a universe of microbes living on and in him or her. Twain wrote another manuscript, equally obscure, called The Great Dark, in which a human looked in a microscope with a drop of pond water for a few minutes and was transported to a ship, which had a microbe crew, on an ocean. His wife was with him and did not grow a human-day older during the entire decade of the voyage. Every crew member had a distinct name and personality. Twain even said that each atom had its own consciousness and personality. Twain was just trying to expand our awareness of the vastness of the big and small in the cosmos. His ideas could certainly not be right, since (as I wrote in a previous essay [ref]) atoms are small but not infinitely small, and molecules involved in metabolism have a lower size limit. Twain, of course, could not have known this.

Stan and I just had a little talk. He is a writer as well as a scientist and educator, and he told me it was physically impossible for him to assign personal pronouns, much less personal names, to all individual organisms. I told him that this didn’t matter; he should at least try. He walked away sadly. I feel bad about alienating him, and maybe if he comes back and says hi to me, I will re-start the relationship.