I continue to report from the Climate Change Workshop sponsored by Oklahomans for Excellence in Science Education (OESE) and the Oklahoma Climatological Survey, helping about 20 middle and high school teachers figure out how to teach about global warming.

As the afternoon session began, Dr. Julie Angle, an education professor at Oklahoma State University, led a discussion called "Decontextualized nature of science: Activities to help students understand climate change concepts." She asked us to think about what science actually is. But also, what is the "nature of science"? We need to think about how we know what we know. When we teach students about global warming, we do not want to preach the environmental gospel to them, but to use global climate change as an example of a topic that we can explore by the methods of scientific inquiry. Let the global warming denialists do the preaching.

Julie, who was chosen by the Oklahoma legislature to be on the school textbook selection committee, pointed out that science is both reliable and tentative. These two terms sound like they contradict one another, but actually it is the tentative nature of science that makes it reliable. Because science is tentative, its mistakes can be corrected by new evidence, and that's why it is reliable. Science also requires creative thinking; a computer (such as they are now) cannot do science. Julie led us through discussions about numerous other characteristics of science. Science is creative and imaginative.

Julie walked around the room with what appeared to be a lit candle. She had the participants describe whatever they could about what they saw. Of course everyone assumed that it was a wax candle--until she ate it. It was actually a piece of potato with a sliver of almond stuck in it. Without being told, some participants figured out that the sliver had to be a nut, in order to provide fuel to the flame. As soon as you assume that it is a candle, then all of your observations get crammed into the framework you have constructed. 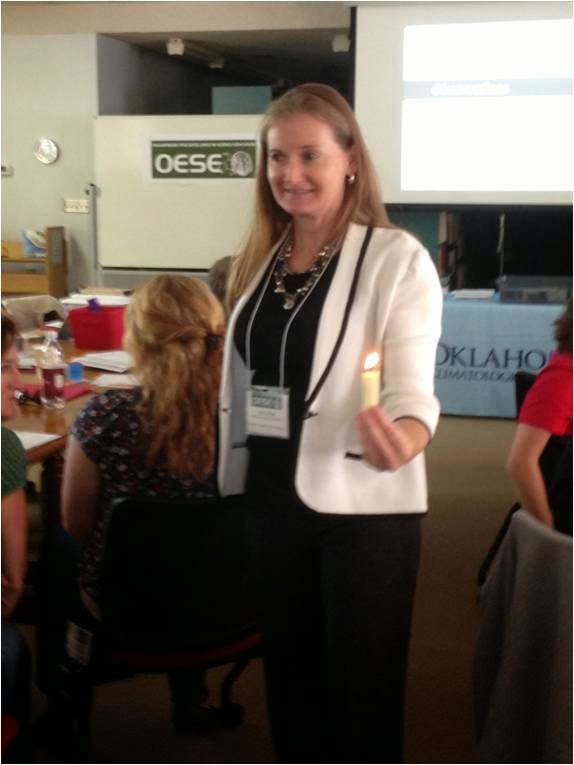 Then Julie led the participants in an activity to interpret some drawings of dinosaur trackways. From this evidence, could they figure out how many dinosaurs there were, and which way they were going? Then, when they got more evidence, they had to alter their explanations.

One of the activities that Julie led was for the participants to look at (fake) cancelled checks and make hypotheses about the story behind the checks. No group looked at all of the checks. Because no single group had all the information, they came up with, and debated, contradictory explanations for the story line, and even debated whether some of the checks were related to the story or not.

Then Monica Deming, a researcher at the Climatological Survey, took us outside to get tree cores. We got a core from a box elder tree, which had relatively soft wood. From a tree core, we can observe tree rings without severely damaging the tree. 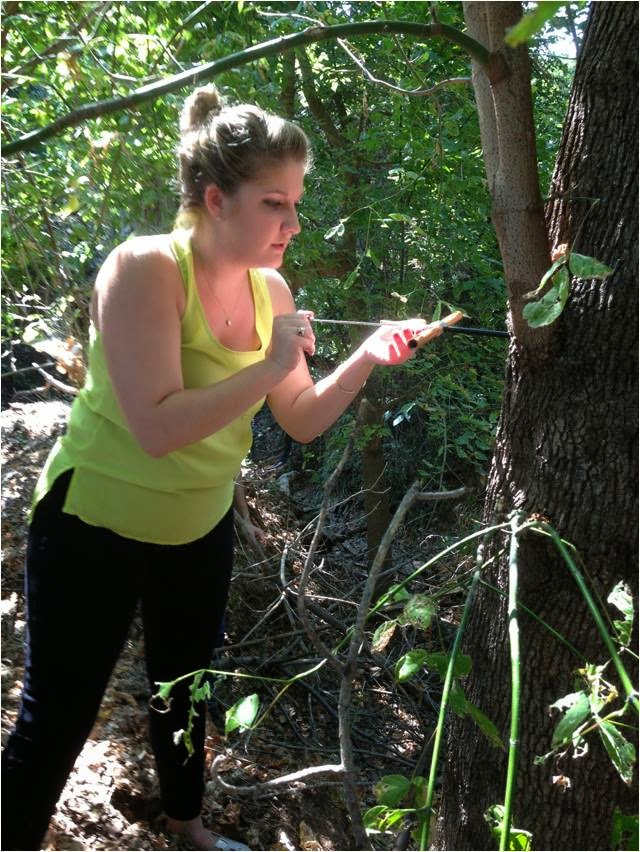 Then, back indoors, Monica told us how to interpret tree ring data from cores. It would seem to be simple to determine a tree's age--just count the rings. But sometimes there is a "false ring" where a tree starts to produce wood in the spring, then it experiences a late frost, after which it begins to grow again, and early spring wood growth is faster than late summer growth.

Then Danny Mattox showed us how he uses imitation tree cores in his class. This activity is valuable for all levels of students, including those who have trouble simply measuring something in millimeters. To engage the students, he has them write significant events in their lives on a paper image of tree rings: write a one-paragraph narrative of their lives on the rings.

Then he handed out simulated wood cores (real ones would have been too fragile). A thick ring means that the growing season was good, for example a lot of rain, so that the tree produced a lot of wood; a thin ring indicates a bad year. The pattern of thick and thin wood layers is therefore a record of growing conditions over decades or even centuries. But not every tree is equally valuable as a climatic record. A tree whose roots grow in a spring may produce thick rings every year, regardless of whether or not droughts have occurred. Just by visual inspection, without measurement, the students can tell which years were better than others for growth.

First, you have to calculate a correlation between ring width and rainfall for years in which rainfall was measured. Participants constructed their own graphs of ring width as a function of rainfall, from which they could calculate a slope. Once you have the slope, you can calculate rainfall for years too far in the past for any rainfall records to exist. Sometimes you can go pretty far into the past; the oldest tree known, a bristlecone pine in the White Mountains of California, just recently discovered, is 5,062 years old. On many levels, this is a new and eye-opening experience for students.
Posted by Honest Ab at 1:46 PM