My Fun Evolution Trip Part Nine: The Most Amazing Plant Fossils in the World, part one.

Ever since I read about the Idaho Miocene fossil beds, at a place called Fossil Bowl, decades ago in an essay by Stephen Jay Gould, I have wanted to visit them. This past summer I finally had the chance. I drove south of Coeur d’Alene in State Highway 3 for about fifty miles and drove through the little town of Clarkia, which has no services and which you could almost drive past without noticing. On the right (west) side of the road was a big open area that had been converted into a motocross track. Unless you have specific directions or just happen to see the hand-painted plywood sign set far back from the road, you will never recognize this as being a famous fossil deposit.

I drove in and looked for a sign telling me where to go. Because I had called the Kienbaum family (the owners) before coming, I knew to look for a house on the hill. So I started driving up what I thought was the driveway and found myself on the motocross track. I didn’t see it coming. Suddenly I was going up a steep slope and then my car (a little Scion) launched off into invisible space and came thumping down on the track. It didn’t make it up the next incline. Fortunately I found a way to exit the track. I found a van of young adult bikers who were taking an air conditioning break, and who had been immensely entertained by the sight of a little car on a motocross track, and they told me how to find the driveway. I had to knock on every door of the house with unfinished siding before Mrs. Kienbaum could tell me to look for her husband and sons in one of the many workshop buildings downhill. The younger son found me and led me through a crowded storehouse full of wooden furniture that Mr. Kenneth Kienbaum had made. I paid ten dollars for the privilege of digging fossils and taking them with me, perhaps the best ten dollars I ever spent. Kenneth told me of the interest that even major media such as PBS were showing in this site. I will be posting some YouTube videos [my channel] of my visit and will announce when I do. I make videos with no budget. If you want to see a video about Fossil Bowl that was actually produced with a budget, using support from Bucknell University, the University of Idaho, and the Botanical Society of America, see Plants Are Cool Too! Episode 2 produced by the very creative Dr. Chris Martine.

The younger Kienbaum son led me to a place I could park right beside the fossil deposit. You would never guess what it was. The outcrop is about the size of a three-car garage. 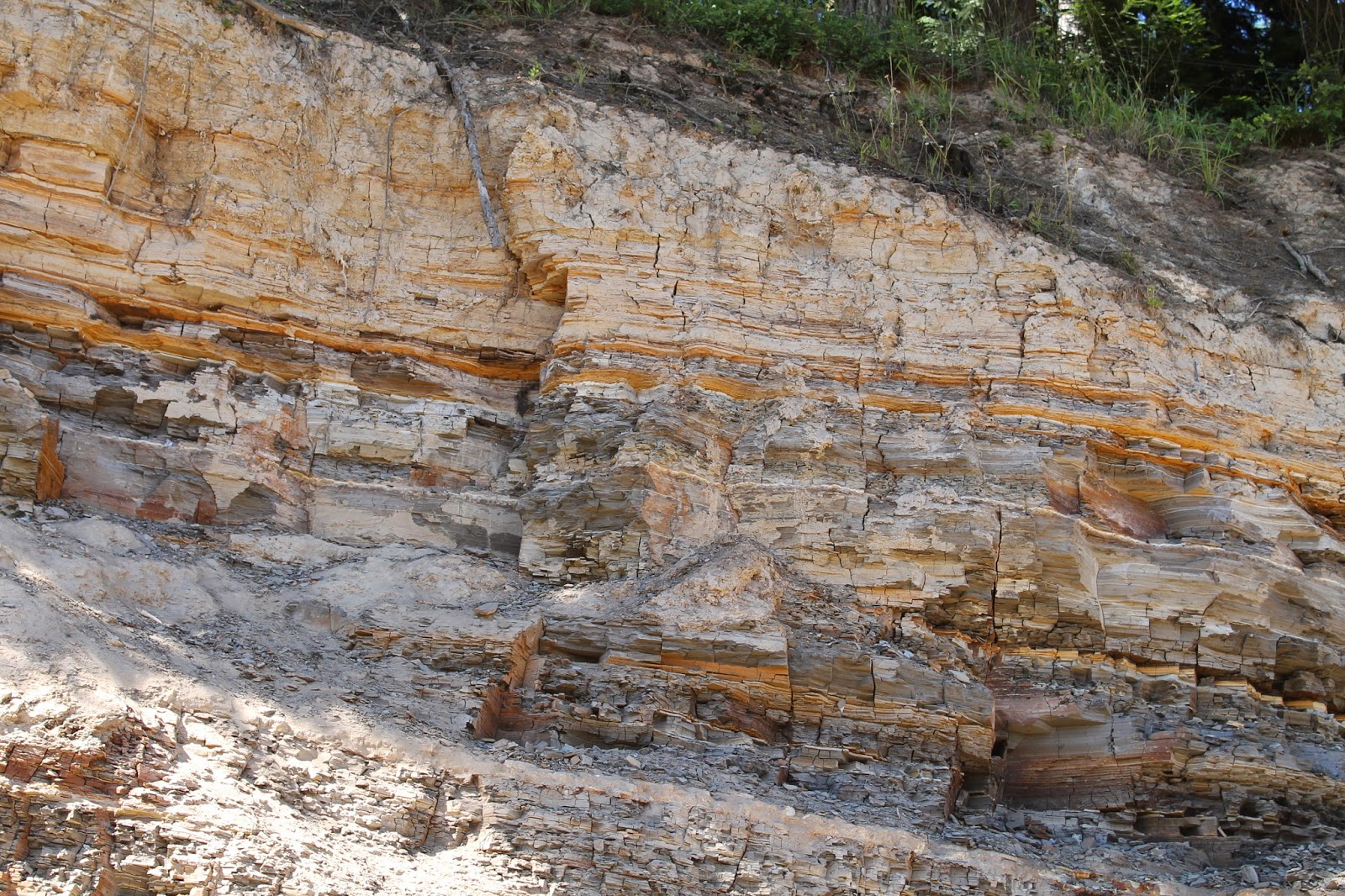 I set to work digging and photographing fossil leaves. (Others have found fossil fishes, but I did not. Leaves are always more abundant than fishes.) I found many good specimens that had already been excavated and were just lying around on the ground. One of my best specimens was one I found by stepping on it. I will provide some details and photos of these specimens in the next essay.

How did these fossils form? Fifteen million years ago, during the Miocene epoch, leaves of a lush forest fell into a lake and were preserved in sediments. Oxygen destroys organic matter, but the water and sediments kept these leaves away from oxygen. In fact, some of the leaves are not leaf fossils, but are actually still leaves, complete with tissue and DNA. I believe that these leaves have provided the oldest DNA specimens ever found, far older than the 30,000-year-old Neanderthal DNA in Europe. The organic molecules from the 70-million-year-old T. rex fossils were collagen, the protein that makes up cartilage, not DNA.

Once exposed to oxygen, these leaves quickly turn black. They are still beautiful fossils, but the organic matter is reduced to a residue. So to find “fresh” leaves, you have to split intact rocks open, which the older son, Riley Kienbaum, showed me how to do. 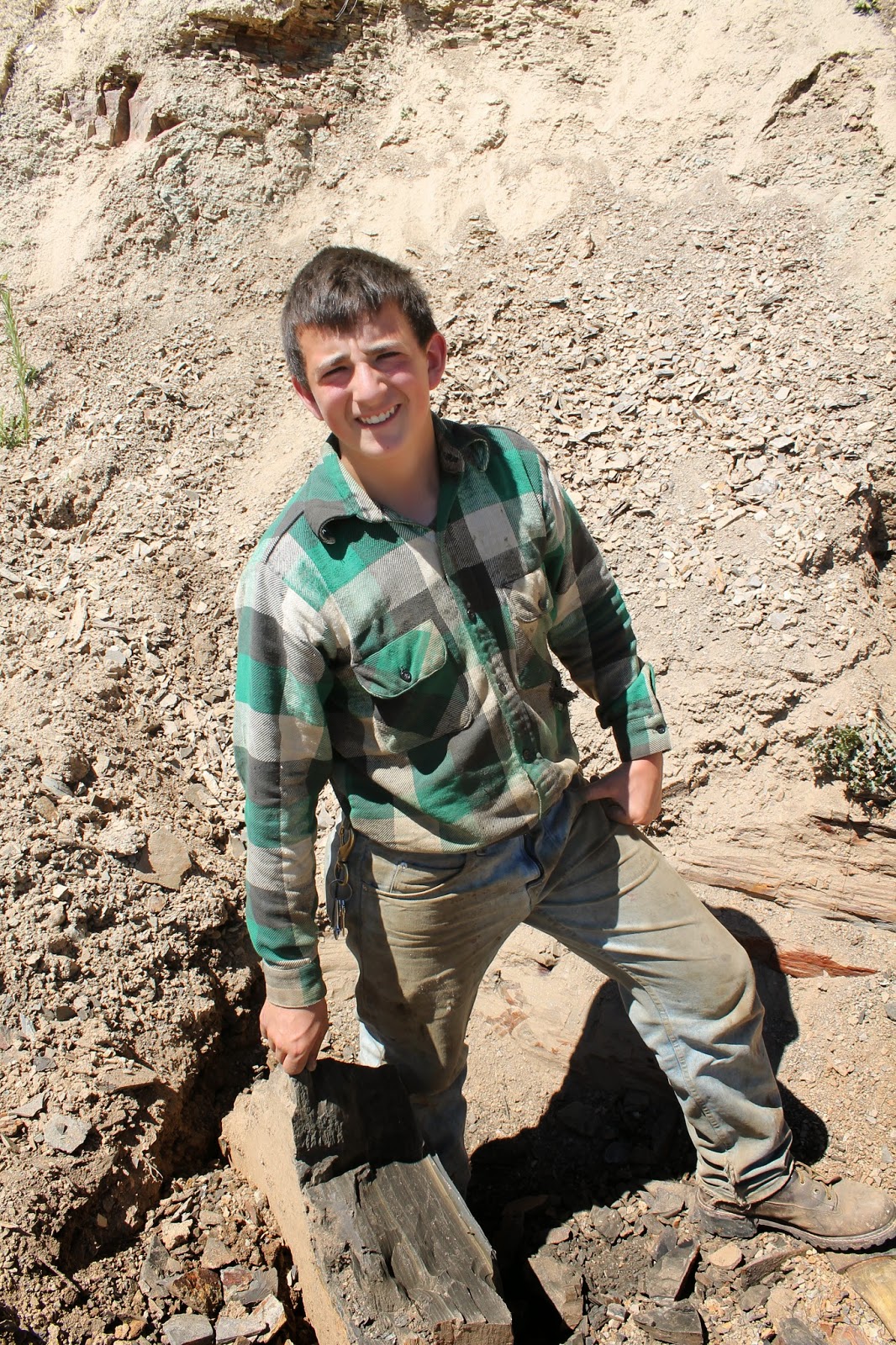 The leaves, mostly autumn deciduous leaves, are separated by layers of sediments. The leaves form a slightly weaker layer in the rock, so that you can carefully split open the rock and expose the leaves. Riley did this for me and I saw some leaves that still had the same red autumn colors that they had 15 million years ago! 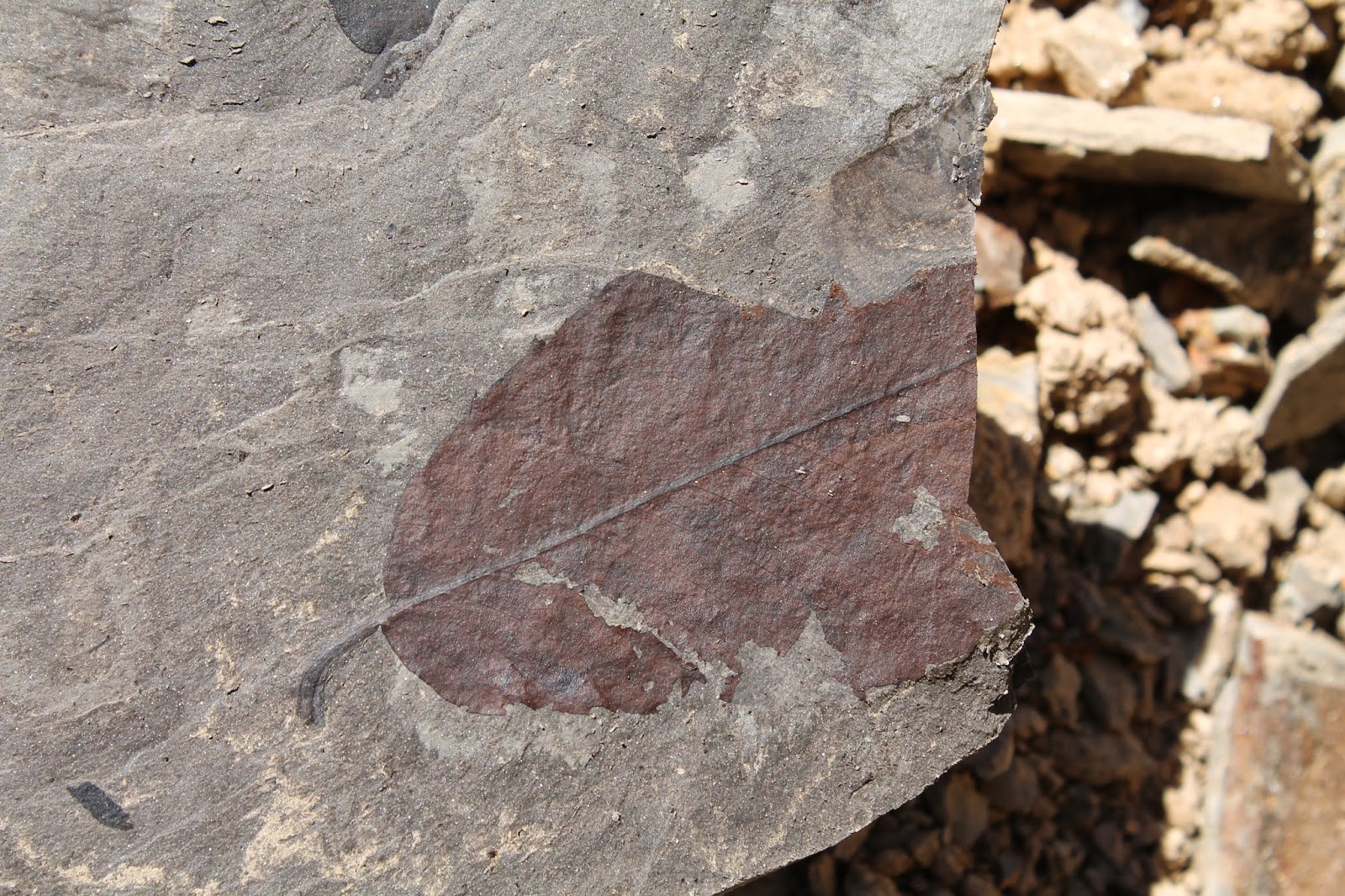 I brought back some slabs of rock, which I kept moist, and which I split open in my laboratory and showed to my students. Unfortunately, in my specimens, the rocks layers crumbled and I was unable to recover any fresh-looking leaves.

How do we know the ages of these leaves? Radiometric dating provides the answer. Radiometric dating can be performed only on volcanic material. But 15 million years ago the Cascades were just rising up as a series of volcanoes, many of which remain active today. The volcanic dust layers interspersed with the leaves and sediments can be dated.

Meanwhile, motorcyclists did some amazing maneuvers just a few feet away from where I was digging. Some of them came over to see what I had found. They were genuinely interested in the fossils and were some of the nicest people I have met

Before planning your trip, it is good to contact the owners and make sure access is open when you plan to visit. They are really very nice people.

In the next essay, I will tell you about the fossils I found.
Posted by Honest Ab at 10:16 AM